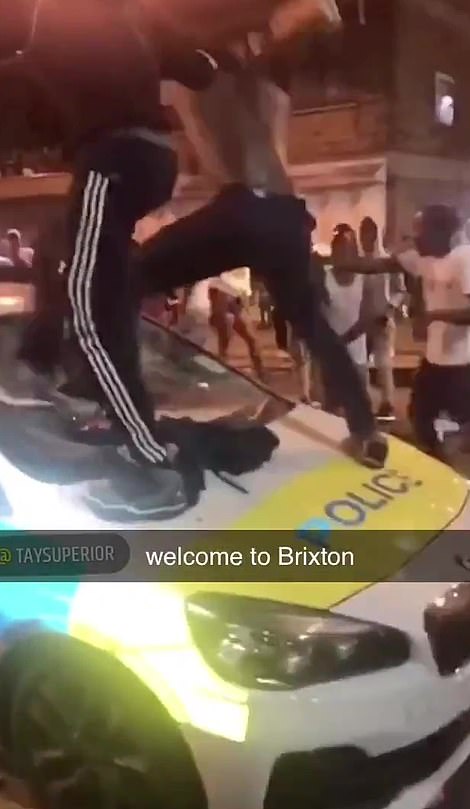 Videos showed a man goading police with a piece of wood, a police car attacked by a man wielding a table leg

By JOE MIDDLETON FOR MAILONLINE

Police Commissioner Cressida Dick has been accused of turning the Met into a 'laughing stock' and abandoning 'law abiding residents' to 'mob rule' after a video showed them overpowering police and screaming 'run them out' as 22 officers are injured - including two needing a full body scan. '

In shocking scenes, social media footage showed hundreds of people gathered at the south London street party as fighting between revellers broke out before they turned their anger onto the police who had been called to the disturbance at the 'unlicensed music event'.

Tory MP Andrew Bridgen told MailOnline: 'Cressida Dick has lost control of the streets to a lawless minority. She has lost the confidence of the law abiding majority of residents in Brixton and the country and by effectively abandoning them to mob rule'.

Suggesting Home Secretary Priti Patel should remind Ms Dick and any other police chiefs of their responsibilities, Mr Bridgen added: 'The duty of a chief constable is to uphold the law. Any who are not willing to do that should go immediately'.

He said the same warning should apply to Avon and Somerset's Chief Constable Andy Marsh whose officers stood back and watched as the statue of Edward Colston was torn down by Black Lives Matter supporters.

And Nigel Farage added: 'The police bosses allowed officers to take the knee to an anti-police group – the lawless are laughing at the police now'.

It is the latest in a string of embarrassing incidents for the Met Police after officers were seen kneeling at Black Lives Matter protests, refused to arrest Extinction Rebellion activists earlier this year and failed to stop Winston Churchill's statue being defaced.

The Prime Minister's official spokesman said: 'These were appalling scenes. Violence against the police will not be tolerated. We have been clear that anyone who assaults the police or any members of the emergency services should face the full force of the law.'

He added that there is a consultation on doubling sentences for attacks on emergency services personnel.

London Mayor Sadiq Khan has also come under fire and been accused of 'losing control of the streets', while a former Scotland Yard chief superintendent said last night's humiliation was endemic of a police force that has 'given up' enforcing the law on the capital's young black people.

The night descended into anarchy as police were confronted by revellers who pelted them with bottles and chased them back to their van.