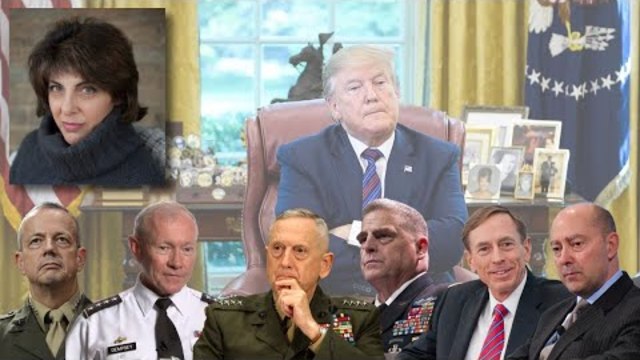 Author Diana West joins Jason Goodman to discuss the recent mutiny of US military generals against the President. She says, "The men who are currently ambushing...President Trump from their positions of being retired generals...they are the same leaders who took us through Iraq and Afghanistan to - what do you want to call it - failure, defeat, loss, waste - I mean, this is the fruit of their labors, of their careers. And now, they come into the political arena...

"When you go back and look at what they did in Iraq and Afghanistan and see what they are doing today in this period of crisis, the similarities are striking, the politics are striking and the Globalism is striking. The failure to address the facts - all of it is of a piece...

"I can tell you that all of these leaders are not nonpartisan. They are not apolitical. They either have direct ties to the Democratic machine or Globalist entities or the Military-Industrial Globalist complex. I mean, these are absolutely committed partisans who have now lent their positions and the military, itself to bashing Trump in [this latest] stage of the rolling coup that we've been looking at."

In 2006, Generals Mattis and Petraeus collaborated on the US Army's Field Manual on Counterinsurgency Operations (COIN), based on what they'd learned from nearly 19 years of operations in Iraq and Afghanistan - which amounted to $8 trillion worth of failure, to say nothing of their own personal failures.

In 2015, Petraeus pled guilty to misdemeanor offenses for sharing classified information with his mistress while he was CIA Director and Mattis joined the board of the fraudulent Theranos corporation and promoted its fake technology late into 2015. In August 2020, Theranos' principals will be facing Federal trials for wire fraud and conspiracy charges.

Notwithstanding, we're seeing their approach to counterinsurgency in Iraq and Afghanistan now being applied Stateside. Whereas, in Iraq and Afghanistan, military forces were told to stand down, in our cities today, the police are being told to stand down and are being threatened with defunding or complete dismantlement, while innocent people are stomped and killed and businesses are looted and destroyed.

Meanwhile, the Washington Post reported that retired Army General Stanley McChrystal has joined an initiative called Defeat Disinfo that uses an information warfare tool developed with taxpayer funding from DARPA to fight ISIS propaganda but targeted at pro-Trump social media accounts for the benefit of the Biden campaign.

Pro-Trump accounts will be tracked with "artificial intelligence and network analysis to map discussion of the president's claims," and then attempt to "intervene" by "identifying the most popular counter-narratives and boosting them through a network of more than 3.4 million influencers across the country — in some cases paying users with large followings to take sides against the president."

I'm always excited to hear what the brilliant Diana West has to say, as she she refreshes our memory of these Generals' outrageous exploits in the Middle East.

This site is frequently blocked.