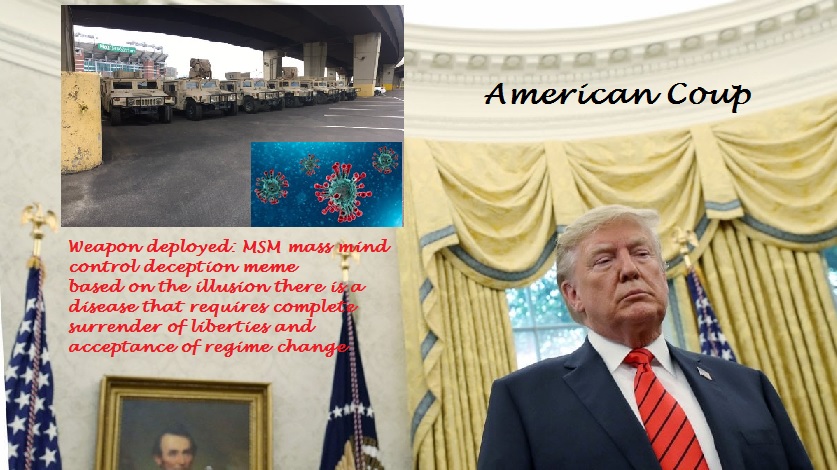 The greatest assault on human society in history is upon us. The mandarins of the propaganda have circled the wagons and declared a pandemic. Based on that declaration, the entire planet must surrender to the deception by placing themselves under virtual house arrest. Freedom of movement is a complete restriction to such an effect that employment is forbidden. We are told that there is a SARS CORONA virus responsible for all of this The only certification to the story is the media is harping it 24/7 ad infinitum ad nauseam. In the manner of George Orwell, Big Brother has spoken 2 + 2 = 5. Why? Because he said so.

The U.S. government has prepared their response plan U.S. Government Response Plan to COVID-19. It is a 103 page document. I failed the plan after coming upon this segment under Assumptions. In the absence of facts, planning assumptions represent information deemed true. THERE ARE NO FACTS and we're turning civilization on its head and destroying the world economy to the point that upon its collapse millions could perish. A great Chinese philosopher said, it doesn't matter how hard you row if you're rowing in the wrong direction. I feel we are being duped to row in the wrong direction.

In an Italian study on alleged victims of the virus found the following:

“More than 99% of Italy’s coronavirus fatalities were people who suffered from previous medical conditions, according to a study by the country’s national health authority.”

Only 0.8% of the victims did not have previous conditions. Almost half had three other conditions. A quarter had one or two other conditions. Most of those who died were elderly. Of those under 40 all had serious other health conditions. So we are seeing these skewed results passed off as a crisis for all to cower from the onslaught.

So do we even have a disease? That is open for interpretation. To declare a virus is a disease vector one must satisfy the Koch postulates. That is something called science. Hype, hyperbole and outright propaganda do not require issues to be confused with facts. That sounds like our government report in the absence of facts.

Purify the pathogen (e.g. virus) from many cases with a particular illness.

Expose susceptible animals (obviously not humans) to the pathogen.

Verify that the same illness is produced.

Re-purify the pathogen, just to be sure that it really is creating the illness.

It has been said that this has never been done with viruses. In absence of this, we are faced with one of the greatest attempts at deception ever devised in human history. I see the confinement and restrictions on people as the same as any junta would impose in a coup. This time they are using health laws which are just as draconian as any other war measures or anti-terror legislation. The fear factor generated gets the populace to voluntarily submit. The question remains who and why? I feel there is a primary reason and target. It is the take down of President Trump.

The media circus is starting to refine the true target now. The CIA warned the president, and he did nothing. I feel this will be the new MSM jihad to vilify him so that by the time of the next election he will be a laughing stock with the economy in a shambles and a purported plague upon the nation. It was a well opined tactic of the liberal left to destroy the nation's economy to make the president look incompetent. I sincerely doubt they gave up. In fact the desire would be seen as a way to combat climate change by stopping the industrialized world in it's tracks. Further comments have been voiced about reducing the world population by pandemic. So for the originators it is a win, win, win situation. 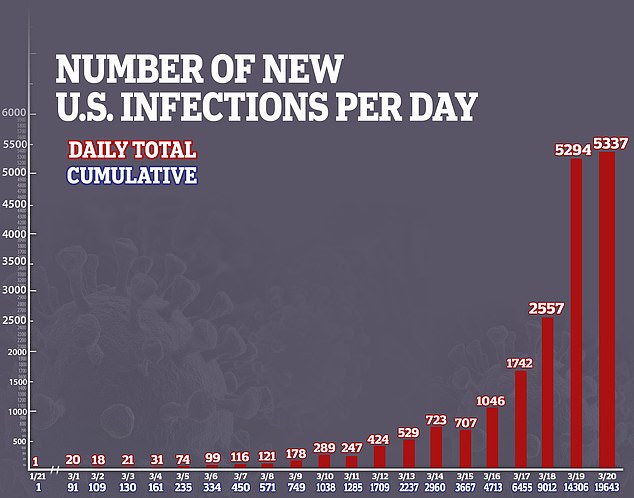 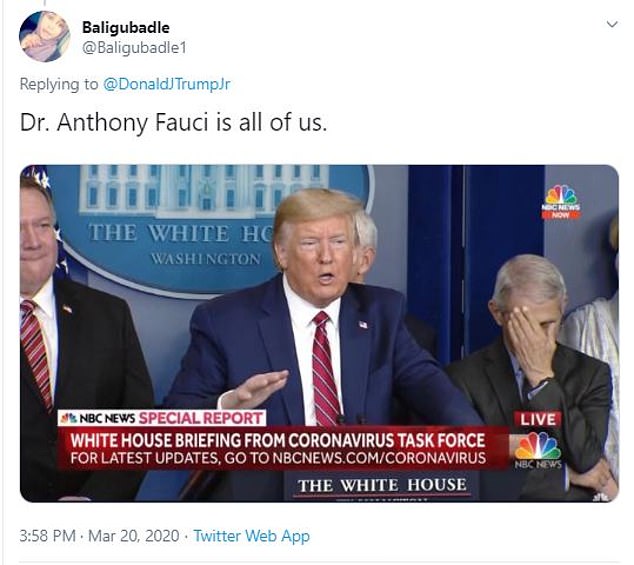 We see the start of the campaign here. Dr. Anthony Fauci provides the antic by embarrassing the president behind his back. He is supposed to be the nation's top immunologist yet he breaks the cardinal rule by touching his face. This will be a protracted campaign to get the president impeached by the people at the ballot box. However, as things progress, and troops are in the streets that doesn't rule out the mob driven rout of the president.

These are perilous times my friends. Thought and reason vanish when the power of the mob is unleashed upon us. Marshall McLuhan said, the medium is the message. That means because media said it our minds are secured in bondage. There is no rational escape except thought if we can ebb the tide of media. It is an daunting task. I have been assailed for even daring to form a thought or an opinion contrary to these media memes by relatively intelligent people who happen to be slaves to the medium. It isn't going to get better. It is most likely to get worse where those not kowtowing to the demands are openly pilloried in the streets. May God have mercy, but what if the emergency hospitals are for those wounded in the coming struggle? What if there is a complete system failure and millions die of starvation as opposed to the so called virus? That will be justified by the order to be sure.

This was a master plan. It will depose the president one way or another. It will convince the supporters of Trump to STAND DOWN out of fear of a mind meme virus preventing armed conflict. All the mechanisms of the police state will be in place at the insistence of a populace frightened into submission. It will give a reason to the disappeared who died of the virus and whose bodies were disposed of secretly to prevent contagion. It will stop the economic engines of the world for climate. It can allow population reduction. It will fulfill the age old nightmare of a new world order of a microchipped and vaccinated populace completely isolated and cut off from God. Nothing could have been both more brilliant and diabolical. So change your mind about the virus. Look at it as a coup against the president. It is the only way to save the republic.