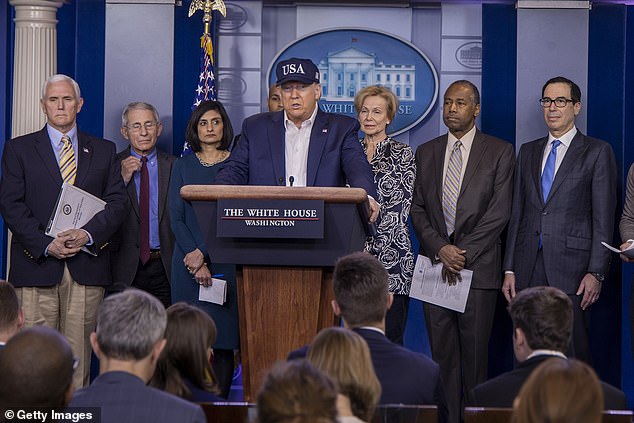 German officials are trying to stop the US from enticing German company CureVac to move its research to the US, insisting no country should have a monopoly on any future vaccine. President Donald Trump had offered funds to lure the company CureVac to the US to reportedly get the vaccine exclusively for Americans

Germany government has made counter-offers to make the company stay

Germany is trying to stop the US from enticing CureVac to move its research to the US, insisting no country should have a monopoly on any future vaccine

Coronavirus symptoms: what are they and should you see a doctor?

By REUTERS and MARLENE LENTHANG FOR DAILYMAIL.COM

German officials are trying to stop the Trump administration from luring German biopharmeceutical company CureVac to the US to get its experimental coronavirus vaccines exclusively for Americans.

President Donald Trump has offered funds to lure the company CureVac to the US. The German government has made counter-offers to make the company stay, according to a report in German newspaper Welt am Sonntag.

CureVac said last week they are working on with a multitude of coronavirus vaccine candidates and are selecting the two best to go into clinical trials.

The company's CEO met with President Donald Trump and the White House Coronavirus Task Force to discuss a vaccine earlier this month.

German politicians are now insisting that no country should have a monopoly on any future vaccine.

CureVac is a biopharmaceutical company headquartered in Tübingen, Germany, that develops therapies based on messenger RNA (mRNA). The company's focus is on developing vaccines for infectious diseases and drugs to treat for cancer and rare diseases. Founded in 2000, CureVac had approximately 240 employees in November 2015 and 375 in May 2018.

In October 2013 Curevac launched a collaboration with Janssen Pharmaceuticals Inc., a Johnson & Johnson company, for the development of novel flu vaccines. Also in 2013, CureVac announced the fourth in a series of partnerships with the Cancer Research Institute and Ludwig Cancer Research to enable clinical testing of novel cancer immunotherapy treatment options.

On March 2014, CureVac won a €2 million prize awarded by the European Commission to stimulate new vaccine technologies that might help the developing world, because the company's research could lead to a new generation of vaccines that don't need refrigeration. Later, in July 2014, CureVac signed an exclusive license agreement with Sanofi Pasteur to develop and commercialize an mRNA-based prophylactic vaccine. By September 2014, the company licensed the global rights for its Phase I candidate – CV9202 – to Boehringer Ingelheim. Boehringer was to conduct trials using the mRNA vaccine in combination with afatinib in advanced and/or metastatic epidermal growth factor receptor (EGFR) mutated non-small cell lung cancer (NSCLC) as well as inoperable stage III NSCLC.

In March 2015, CureVac's investor, the Bill & Melinda Gates Foundation, agreed to provide separate funding for several projects to develop prophylactic vaccines based on CureVac's proprietary mRNA platform. By September 2015, CureVac entered into a collaboration with the International AIDS Vaccine Initiative (IAVI) to accelerate the development of AIDS vaccines, utilizing immunogens developed by IAVI and partners, delivered via CureVac's mRNA technology. That same month, CureVac announced it would open a United States hub in Boston, Massachusetts.

In accordance with its deal with Lilly, the company began construction on a production facility in 2016. By 2017, CureVac had received approximately US$359 million (€305 million) in equity investments and was valued at US$1.65 billion (€1.40 billion).