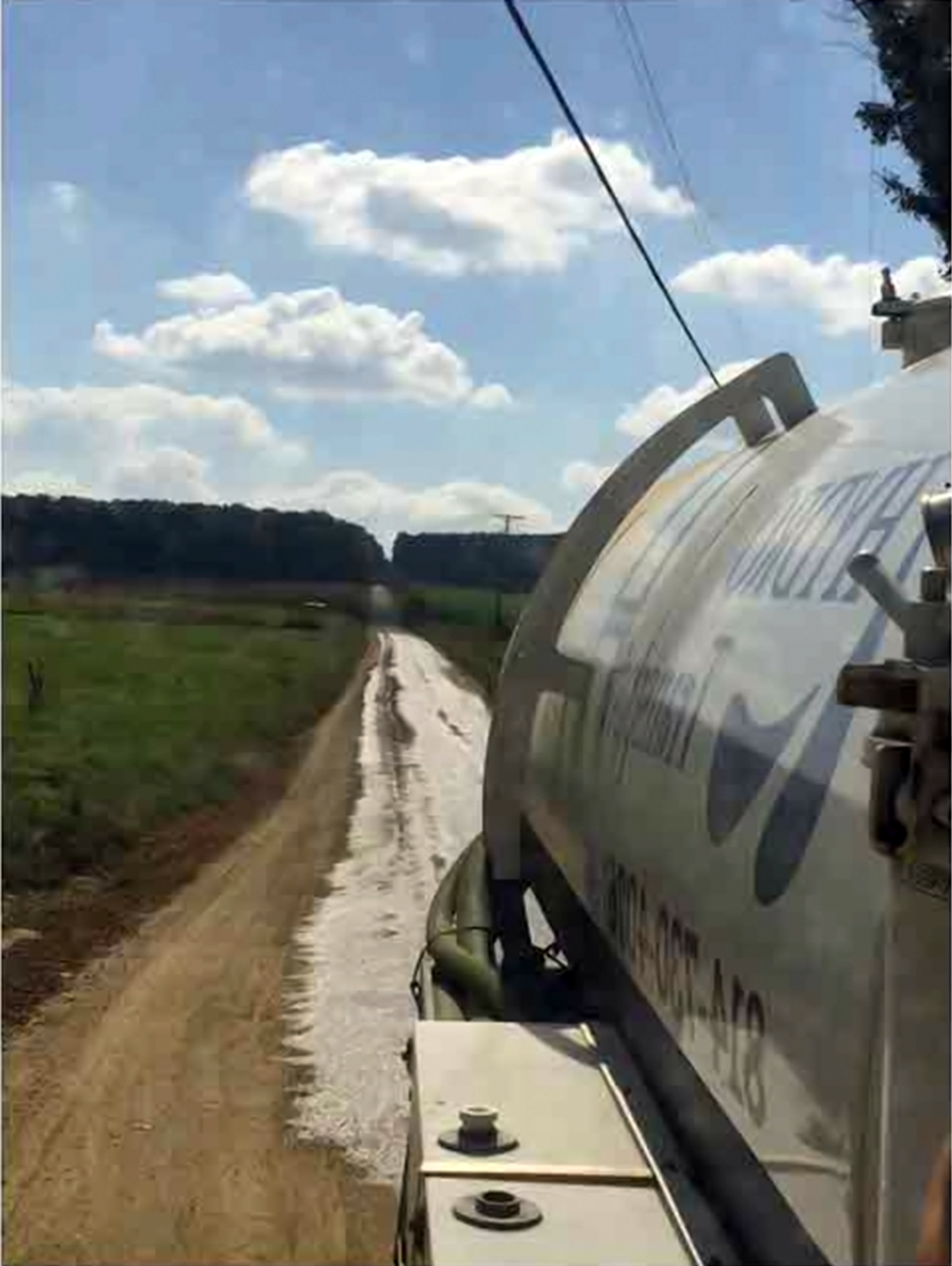 Brine-spreading is used to suppress dust on dirt roads, but “there appears to be a complete lack of data indicating the practice is effective,” a 2018 study found.

In 2014, a muscular, middle-aged Ohio man named Peter took a job trucking waste for the oil-and-gas industry. The hours were long — he was out the door by 3 a.m. every morning and not home until well after dark — but the steady $16-an-hour pay was appealing, says Peter, who asked to use a pseudonym. “This is a poverty area,” he says of his home in the state’s rural southeast corner. “Throw a little money at us and by God we’ll jump and take it.”

In a squat rig fitted with a 5,000-gallon tank, Peter crisscrosses the expanse of farms and woods near the Ohio/West Virginia/Pennsylvania border, the heart of a region that produces close to one-third of America’s natural gas. He hauls a salty substance called “brine,” a naturally occurring waste product that gushes out of America’s oil-and-gas wells to the tune of nearly 1 trillion gallons a year, enough to flood Manhattan, almost shin-high, every single day. At most wells, far more brine is produced than oil or gas, as much as 10 times more. It collects in tanks, and like an oil-and-gas garbage man, Peter picks it up and hauls it off to treatment plants or injection wells, where it’s disposed of by being shot back into the earth.

One day in 2017, Peter pulled up to an injection well in Cambridge, Ohio. A worker walked around his truck with a hand-held radiation detector, he says, and told him he was carrying one of the “hottest loads” he’d ever seen. It was the first time Peter had heard any mention of the brine being radioactive.

The Earth’s crust is in fact peppered with radioactive elements that concentrate deep underground in oil-and-gas-bearing layers. This radioactivity is often pulled to the surface when oil and gas is extracted — carried largely in the brine.

In the popular imagination, radioactivity conjures images of nuclear meltdowns, but radiation is emitted from many common natural substances, usually presenting a fairly minor risk. Many industry representatives like to say the radioactivity in brine is so insignificant as to be on par with what would be found in a banana or a granite countertop, so when Peter demanded his supervisor tell him what he was being exposed to, his concerns were brushed off; the liquid in his truck was no more radioactive than “any room of your home,” he was told. But Peter wasn’t so sure.

“A lot of guys are coming up with cancer, or sores and skin lesions that take months to heal,” he says. Peter experiences regular headaches and nausea, numbness in his fingertips and face, and “joint pain like fire.”

He says he wasn’t given any safety instructions on radioactivity, and while he is required to wear steel-toe boots, safety glasses, a hard hat, and clothes with a flash-resistant coating, he isn’t required to wear a respirator or a dosimeter to measure his radioactivity exposure — and the rest of the uniform hardly offers protection from brine. “It’s all over your hands, and inside your boots, and on the cuticles of your toes, and any cuts you have — you’re soaked,” he says.

So Peter started quietly taking samples of the brine he hauled, filling up old antifreeze containers or soda bottles. Eventually, he packed a shed in his backyard with more than 40 samples. He worried about further contamination but says, for him, “the damage is already done.” He wanted answers. “I cover my ass,” he says. “Ten or 15 years down the road, if I get sick, I want to be able to prove this.”

Through a grassroots network of Ohio activists, Peter was able to transfer 11 samples of brine to the Center for Environmental Research and Education at Duquesne University, which had them tested in a lab at the University of Pittsburgh. The results were striking.

Radium, typically the most abundant radionuclide in brine, is often measured in picocuries per liter of substance and is so dangerous it’s subject to tight restrictions even at hazardous-waste sites. The most common isotopes are radium-226 and radium-228, and the Nuclear Regulatory Commission requires industrial discharges to remain below 60 for each. Four of Peter’s samples registered combined radium levels above 3,500, and one was more than 8,500.

“It’s ridiculous that these drivers are not being told what’s in their trucks,” says John Stolz, Duquesne’s environmental-center director. “And this stuff is on every corner — it is in neighborhoods. Truckers don’t know they’re being exposed to radioactive waste, nor are they being provided with protective clothing.

“Breathing in this stuff and ingesting it are the worst types of exposure,” Stolz continues. “You are irradiating your tissues from the inside out.” The radioactive particles fired off by radium can be blocked by the skin, but radium readily attaches to dust, making it easy to accidentally inhale or ingest. Once inside the body, its insidious effects accumulate with each exposure. It is known as a “bone seeker” because it can be incorporated into the skeleton and cause bone cancers called sarcomas. It also decays into a series of other radioactive elements, called “daughters.” The first one for radium-226 is radon, a radioactive gas and the second-leading cause of lung cancer in the U.S. Radon has also been linked to chronic lymphocytic leukemia. “Every exposure results in an increased risk,” says Ian Fairlie, a British radiation biologist. “Think of it like these guys have been given negative lottery tickets, and somewhere down the line their number will come up and they will die.”

Peter’s samples are just a drop in the bucket. Oil fields across the country — from the Bakken in North Dakota to the Permian in Texas — have been found to produce brine that is highly radioactive. “All oil-field workers,” says Fairlie, “are radiation workers.” But they don’t necessarily know it.

It reminds me of a The Invaders episode. Where's Greta when you need her?

I firmly believe they are purposely murdering us. The release of toxic radiation is global in scope. The accidents were not accidents. The testing insane as well as this spraying us like cockroaches. On an old Power Hour I reported that the Barium and Strontium in chemtrails can be byproducts of nuclear waste.

The Aliens have decided to play for high stakes and so start to raise the radiation levels on Earth. The only country unaffected is that of Premier Thor Halvorsen's (Eduard Franz) country and the aliens under the disguise of saviors have convinced him that they have the antidote called 'AR5'. Halvorsen is convinced and calls for a summit of world leaders where they'll discuss rising levels of radiation that threaten all life on earth, thus advancing the aliens plans to kill all world leaders in the one place, thereby causing chaos to facilitate a coup d'état for the aliens. Halvorsen is unknowingly surrounded by aliens including their murderous leader Alquist (Michael Rennie). Industrialist Michael Tressider (William Windom) is a crusader like Vincent and having worked with Vincent in the past, summons Vincent from his work site. Tressider has learned of an upcoming summit that many world leaders will attend and has put his trust in the Pentagon General Blaine (Ford Rainey). Blaine, however has sided with the aliens and traps Tressider at an alien secret installation to find out just how much Tressider knows or might have told the President.

Meanwhile Vincent has made friends with Blaine's secretary Ellie (Diana Hyland) to collect his pass to the Summit, supposedly arranged by General Blaine. When Ellie cuts herself at dinner and doesn't bleed, thus alerting David Vincent, David soon realizes that he is up to his neck in invaders, including Ellie, but she informs him about the real purpose of the summit, explaining that not all the aliens are in favour of this mass killing. She tells him that Tressider is lured into a trap, so she and Vincent head to the secret installation, a disused warehouse. Tressider is being tortured, but Vincent manages to shoot an alien, electrocute two more, and drag Tressider out. Blaine is also electrocuted, but Alquist the torturer escapes. Vincent's aim is to now get to the summit, but Ellie makes it clear that she will intervene and destroy Vincent if necessary, even though she may not agree with the alien's plans.