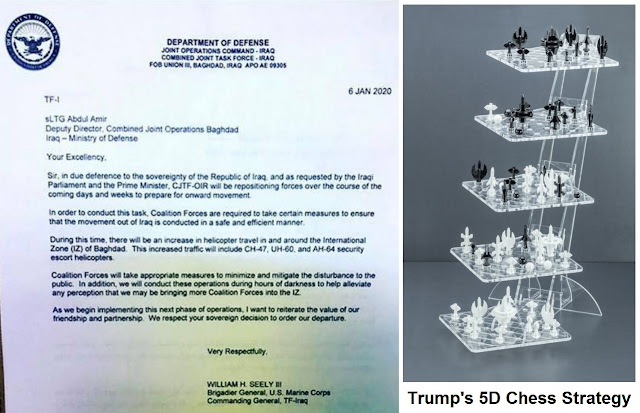 It should be clear, that the consequences of eliminating the Iranian General Qassem Soleimani was a well-considered move by Trump.

Remember that at the UN meeting Trump proclaimed that the U.S. is sovereign and will respect others if they also declare themselves sovereign.

There is no future for globalism but for patriotism.

The reaction to the elimination of Qassem Soleimani was therefore predictable, so Trump could expect a reaction from the Iraqi government to leave the country.

Strangely enough, Trump received support from Merkel, so the deal with Iran is now completely on edge, and we can expect that from Iran the names of corrupt western politicians who have received bribes, from the money that Obama had given to Iran, will be mentioned.

The three European leaders also call on Iran not to use violence. They also insist on de-escalation on both sides.

The Globalists have a good stomach for Trump's action, and have exposed their double agenda.

Sunday evening, Tehran declared that it would no longer abide by the 2015 agreement, which states that Iran will refrain from developing nuclear weapons.

The European heads of government are now calling on Iran to "withdraw measures" that are not in line with the nuclear agreement. The US had previously unilaterally withdrawn from the agreement.

After the liquidation of the Iranian Major General Qassem Soleimani by the United States on Friday, Tehran threatens to retaliate.

Conversely, US President Donald Trump announced on Twitter that when Iran attacks US targets, the US will strike back "quickly, completely and perhaps disproportionately".

Earlier, he had already threatened to attack dozens of Iranian locations, should Tehran retaliate.

Of course, this also has consequences for the NATO, because the NATO is an occupying power established by the bankers to control the countries they have occupied.

America first, and Trump's promise to recognize other countries as sovereign states, is the prelude to GESARA.

This will allow the countries that do not want an American siege to ask for it, so Trump will withdraw the troops, as he shows.

By dismantling the Nato, and the RV/GCR, the Fiat Petrodollar and the Fiat Euro will no longer be a tool to bind sovereign countries to the ECB and EU dictatorship.

Because Saudi Arabia's Oil can no longer be sold with the worthless dollar, but must be paid with Gold, as the Muslim countries have decided.

In this way they circumvent the sanctions imposed on them by the US.

Trump has sold a lot of military equipment to Saudi Arabia, but will not protect them if there is a conflict with Iran.

From my point of view, Trump has lit the fuse to resolve all conflicts in the Middle East quickly and effectively in this way, with no more interference from the FED owners, as they are bankrupt.

All in all, a fine example of 5D chess.

The Deepstate exposes itself and globalism is dying.

Sir, out of respect for the sovereignty of the Republic of Iraq and at the request of the Iraqi Parliament and the Prime Minister, CJTF-OIR will reposition its forces in the coming days and weeks to prepare for further movement.

In order to carry out this task, the Coalition Forces need to take certain measures to ensure that the movement out of Iraq takes place in a secure and efficient manner.

During this time there will be an increase in the number of helicopter movements in and around the International Zone (IZ) of Baghdad. This increase in traffic will consist of CH-47, UH-60 and AH-64 security escort helicopters.

As we begin the implementation of this next phase of operations, I would like to reiterate the value of our friendship and partnership. We respect your sovereign decision to order our departure.