The world has squandered so much time mustering the action necessary to combat climate change that rapid, unprecedented cuts in greenhouse gas emissions offer the only hope of averting an ever-intensifying cascade of consequences, according to new findings from the United Nations.

Already, the past year has brought devastating hurricanes, relentless wildfires and crippling heat waves, prompting millions of protesters to take to the streets to demand more attention to a problem that seems increasingly urgent.

Amid that growing pressure to act, Tuesday’s U.N. report offers a grim assessment of how off-track the world remains. Global temperatures are on pace to rise as much as 3.9 degrees Celsius (7 degrees Fahrenheit) by the end of the century, according to the United Nations’ annual “emissions gap” report, which assesses the difference between the world’s current path and the changes needed to meet the goals of the 2015 Paris climate accord.

As part of that deal, world leaders agreed to hold warming to “well below” 2 degrees Celsius compared with preindustrial levels; the current trajectory is nearly twice that.

Should that pace continue, scientists say, the result could be widespread, catastrophic effects: Coral reefs, already dying in some places, would probably dissolve in increasingly acidic oceans. Some coastal cities, already wrestling with flooding, would be constantly inundated by rising seas. In much of the world, severe heat, already intense, could become unbearable.

Global greenhouse gas emissions must begin falling by 7.6 percent each year beginning 2020 — a rate currently nowhere in sight — to meet the most ambitious aims of the Paris climate accord, the report issued early Tuesday found. Its authors acknowledged that the findings are “bleak.” After all, the world has never demonstrated the ability to cut greenhouse gas emissions on such a scale.

“Our collective failure to act early and hard on climate change means we now must deliver deep cuts to emissions,” Inger Andersen, executive director of the U.N. Environment Program, said in a statement announcing the findings. “We need to catch up on the years in which we procrastinated.”

The sobering report comes at a critical moment, when it remains unclear whether world leaders can summon the political will to take the ambitious action scientists say is essential. So far, the answer has been no. 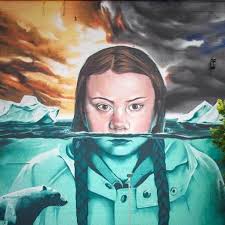 Noah built an ark in his day. The climate emergency was real. In this scam we have to wait 100 years. None of us will be alive then, and no one will really care. If this time is remembered, it may illicit a good belly laugh at how gullible people are.

However, young Greta has wells of tears to share over our extinction. One of the oldest children's tales was Henny Penny or Chicken Little. The sky is falling. People love a good panic. They still do. They just forgot the childhood tale that is listed as Aarne-Thompson-Uther type 20C, which includes international examples of folktales that make light of paranoia and mass hysteria.

In an 1823 Scandinavian version, which is fitting for Greta, had a nut (Greta?) fall on her head. All the world is falling (al Verden falder) So let us run (Saa lad os løbe) Raev Skraev runs with them into the wood and eats them one by one.

This is the moral of the story. They scare us. We run into the 5G forest and are consumed en masse. Sorry Greta. I know how the tale pans out. I'll rewrite These boots by Nancy Sinatra and hope the carbon footprints stomp all over you.