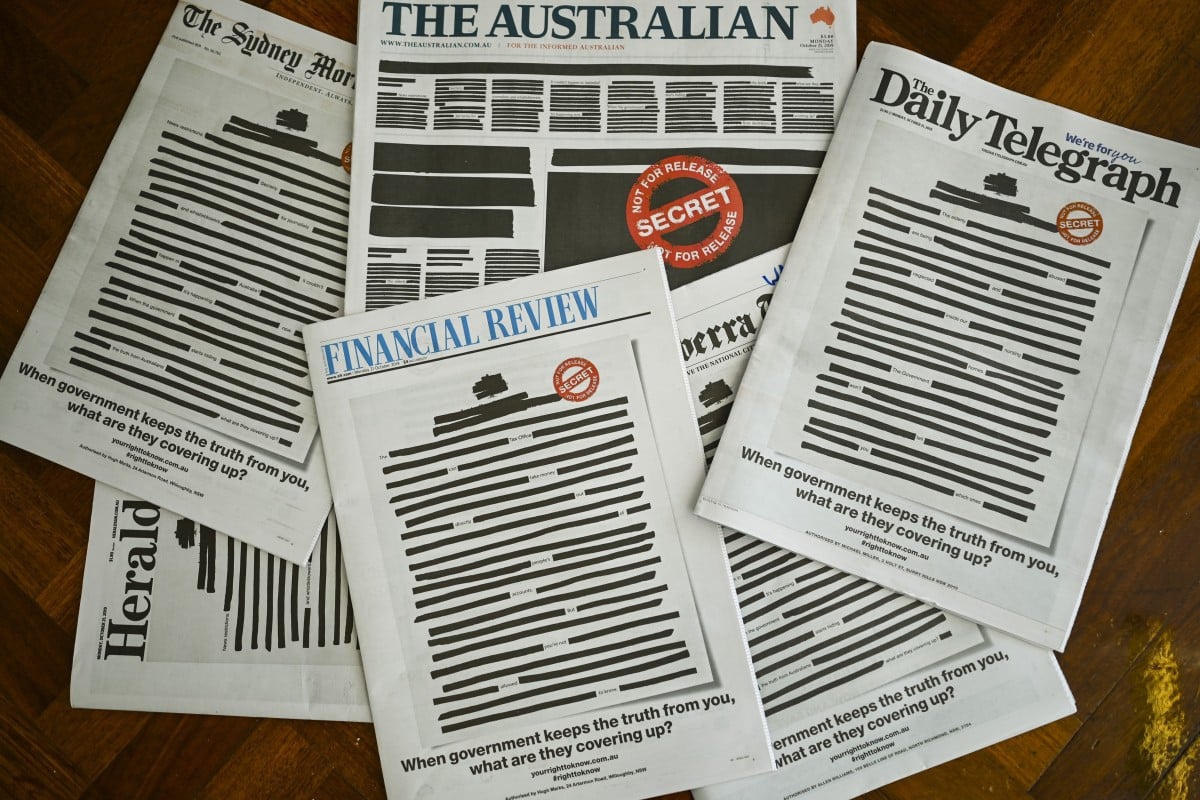 Newspapers across Australia ran heavily redacted front pages on Monday in protest against government secrecy and a crackdown on press freedom, a rare show of unity in a fractious media landscape.

National and regional titles including The Australian, The Sydney Morning Herald and the Australian Financial Review hit news-stands on Monday with most of their front-page news stories blacked out.

Advertisements have also been rolled out across the country’s television networks, asking viewers to consider the question: “When the government hides the truth from you, what are they covering up?”

The campaign by the Right to Know coalition was sparked by federal police raids on the national broadcaster ABC and a News Corp journalist’s home earlier this year over two stories that had proved embarrassing for the government. 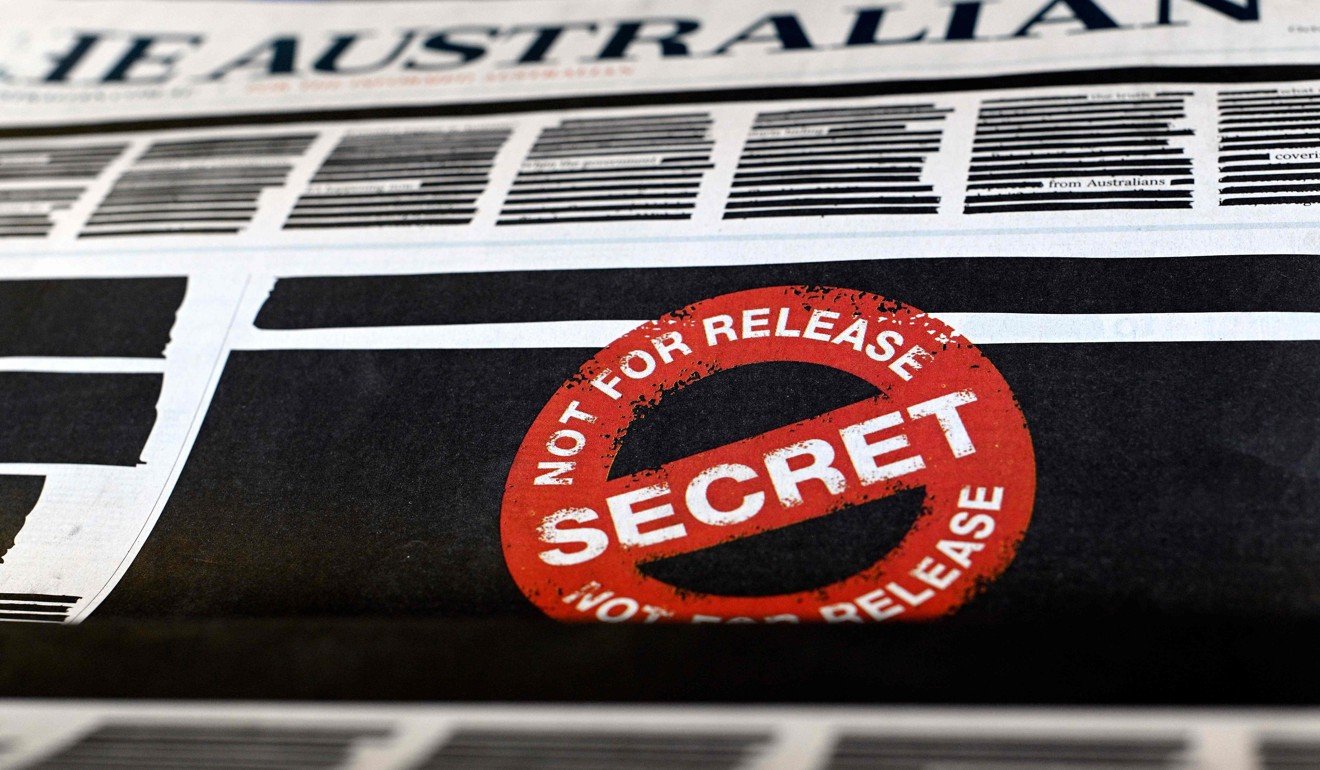 A close-up of ‘The Australian’ newspaper with most of its front page redacted. Photo: AFP

It centres on six demands, including exemptions for journalists from strict national security laws that have created a complex web of provisions critics say too easily ensnare reporters doing their jobs.

“The culture of secrecy that has descended through these legal provisions restricts every Australian’s right to know and goes well beyond the original intent of national security,” Media Entertainment and Arts Alliance union head Paul Murphy said.

“The police raids on the home of News Corp journalist Annika Smethurst and the headquarters of the ABC in Sydney were direct attacks on media freedom in Australia but they are just the tip of the iceberg.”

Three journalists are facing possible criminal charges in the wake of the raids – Smethurst for revealing the government was considering plans to spy on Australians – and two ABC reporters for exposing alleged war crimes by Australian special forces in Afghanistan.

The media groups are also calling for enhanced protections for public sector whistle-blowers – who have also faced charges for leaking to the press – as well as an improved freedom of information regime and defamation law reform.

Australia’s defamation laws are notoriously complex and among the strictest in the world.

And unlike most liberal democracies, Australia does not have a bill of rights or constitutionally enshrined protections for freedom of speech.

Prime Minister Scott Morrison said his government would “always believe in the freedom of the press”, but he also insisted that journalists were not above the law. 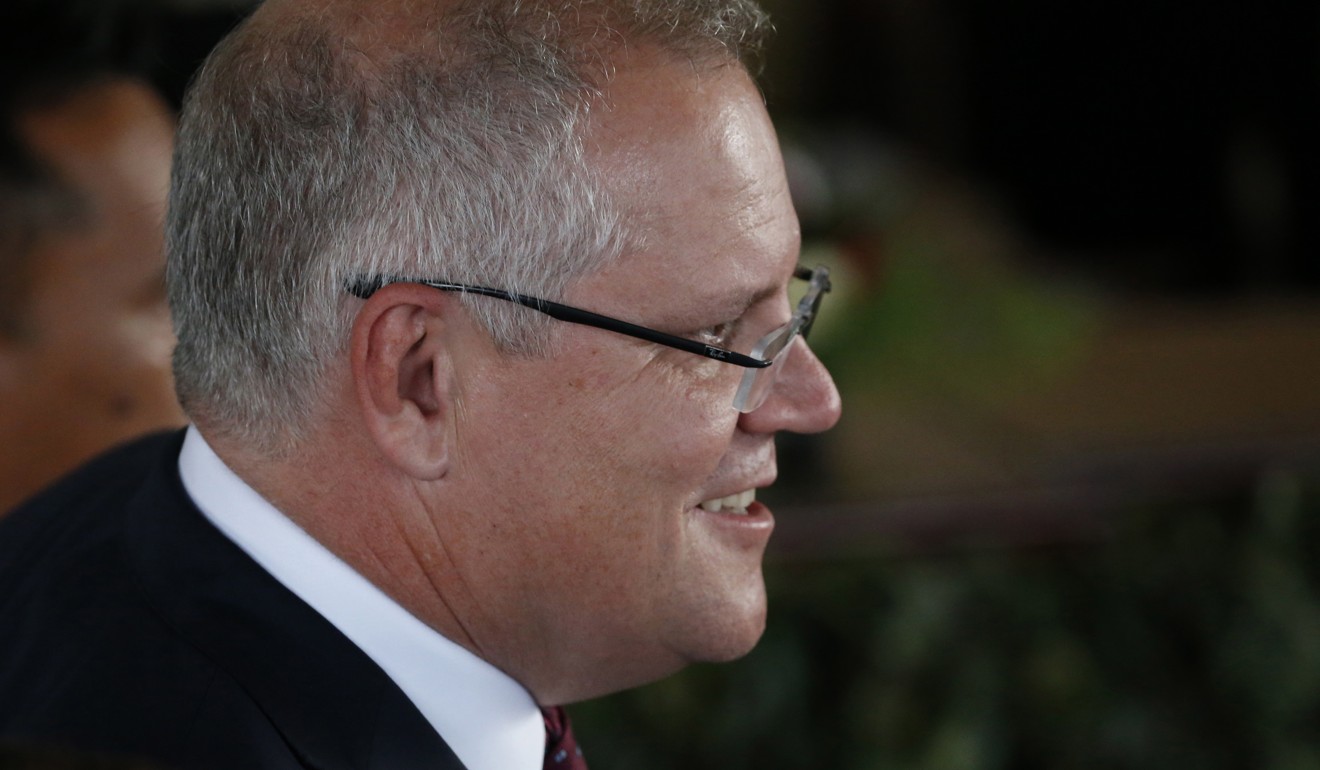 “The rule of law has to be applied evenly and fairly in protection of our broader freedoms, and so I don’t think anyone is, I hope, looking for a leave pass on any of those things,” he told reporters during an official visit to Jakarta.

A press freedom inquiry is due to report its findings to the country’s parliament next year.

Of course, you heard this report on your local news. Enough said.