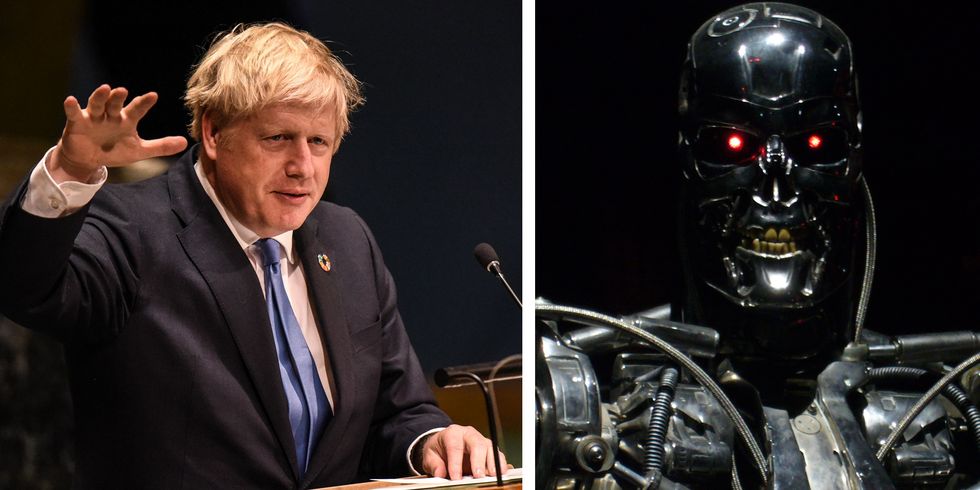 Beyond the fact he has a hairdo that looks like he tumbled overboard from a cruise ship and floated to an island where his head was towel-dried by rambunctious monkeys, I don’t know much about Boris Johnson.

But now I must know more about what he knows.

The main reason I watched his speech in the wee hours — well, the main reason is insomnia — but the secondary reason is I was hoping to glean insights into Brexit. It’s like quantum mechanics. The more I read about Brexit, the less I understand.

But the U.K.’s dishevelled head honcho was not in New York to talk about leaving Europe. He was there to scare the living daylights out of anyone who harbours apocalyptic visions of how technology may ultimately destroy humanity. At one point, I sat bolt upright in bed and stared at my phone, mouth open, like I was trapped inside a horror novel co-written by Stephen King and the Unabomber.

I try not to quote politicians at length, mostly because politicians tend to spit out sound bites that are lethally dull. Nothing lards up an opinion column like an extended block of quotations. But with apologies, I need to break that rule today and regurgitate several verbatim passages from Johnson so you can understand why I’m typing this dispatch from under the basement stairs:

“A future Alexa will pretend to take orders. But this Alexa will be watching you, clucking her tongue and stamping her foot.”

“Voice connectivity will be in every room and almost every object: your mattress will monitor your nightmares.”

“Should the machines — and only the machines — decide whether or not we are eligible for a mortgage or insurance, or what surgery or medicines we should receive?”

“And how do we know that the machines have not been insidiously programmed to fool us or even to cheat us?”

“A.I.: what will it mean? Helpful robots washing and caring for an aging population? Or pink-eyed terminators sent back from the future to cull the human race?” (That’s where I sat up.)

“What will synthetic biology stand for: restoring our livers and our eyes with miracle regeneration of the tissues, like some fantastic hangover cure? Or will it bring terrifying limbless chickens to our tables?”

Now, if I was hearing this stuff from, I don’t know, an NHL player, I might politely smile and slowly back out of the room. If it were Auston Matthews, I’d also cover my eyes and tell him to pull up his pants already. But these chilling prophecies — conniving digital assistants, clairvoyant box springs, tattletale tablets, pink-eyed terminators, poultry amputees — were coming from one of the most powerful leaders in the world, a guy with access to top-secret intelligence.

What does he know?

Are you listening? This is the mark of the beast silicon life system that will enslave us.

There can be no doubt as to why they need to disarm us.

The reporter was scared to death. We must not walk into the trap. We must look to Hong Kong as an example of how to maintain freedoms. To arms. To arms. The AI is coming. But we don't have any arms? The Art of War still works as in the day it was written. Those of us with the means and the voice must be the Paul Revere's of humanity. This is your mattress speaking. Please do not form thoughts and opinions lest the microwave summons the pink eyed terminator to facilitate your slumber.

Any copyright material is used under fair use doctrine for educational non profit discussion of news, trends and film history.

Social – Disclaimer: In accordance with Title 17 U.S.C. Section 107, any copyrighted work is archived here under fair use without profit or payment to those who have expressed a prior interest in reviewing the included information for personal use, non-profit research and educational purposes only. Ref. http://www.law.cornell.edu/uscode/17/107.shtml.