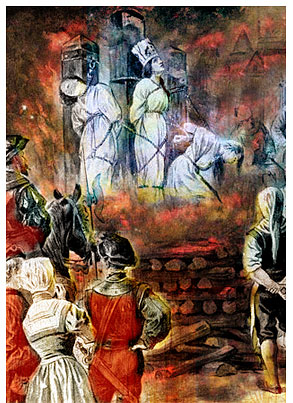 A classic propaganda piece. The reason the right to bear arms was enshrined in the Bill of Rights in 1689 was the Inquisition. However, it was a right given to protestants. Our fearless leader is a Papist by birth. Is there a connection? Are we still fighting these age old battles? If so, we know what happens after disarmament. So the Globe couldn't track down the crime guns. The Saskatchewan gun store theft remains unsolved. As in all crimes, the agents employed and deployed by the state are blameless and protected by secrecy. However, their history was and still is well known. It just is concealed by the corporate news Borg from the dialectic.

By their silence government is god and the harbinger of all fealty to the supreme state as we can create it by the manipulation of facts to create a reality akin to its establishment of power. It has always been that way. The whip has been replaced by the application of words to create the wounds for subservience. To that end we grovel. Even the Maoist axiom of political power grows out of the barrel of a gun would at least reveal that this is not a gun grab but a power grab to entrench a future Google city which is nothing more than a digital concentration camp. Elon Musk desires your intellect if not your very soul uploaded to a device and the cloud. Why indeed would anyone need or require the the right to bear arms protestant of not?

Then an old 'georgism.' Do you know why they don't burn witches anymore? Somebody invented the repeating firearm. Why indeed.

The Bill of Rights 1689, also known as the English Bill of Rights, is an Act of the Parliament of England that sets out certain basic civil rights and clarifies who would be next to inherit the Crown. It received the Royal Assent on 16 December 1689 and is a restatement in statutory form of the Declaration of Right presented by the Convention Parliament to William III and Mary II in February 1689, inviting them to become joint sovereigns of England. The Bill of Rights lays down limits on the powers of the monarch and sets out the rights of Parliament, including the requirement for regular parliaments, free elections, and freedom of speech in Parliament. It sets out certain rights of individuals including the prohibition of cruel and unusual punishment and reestablished the right of Protestants to have arms for their defence within the rule of law. It also includes no right of taxation without Parliament’s agreement. Furthermore, the Bill of Rights described and condemned several misdeeds of James II of England.