One Handgun, 9 Murders: How American Firearms Cause Carnage Abroad 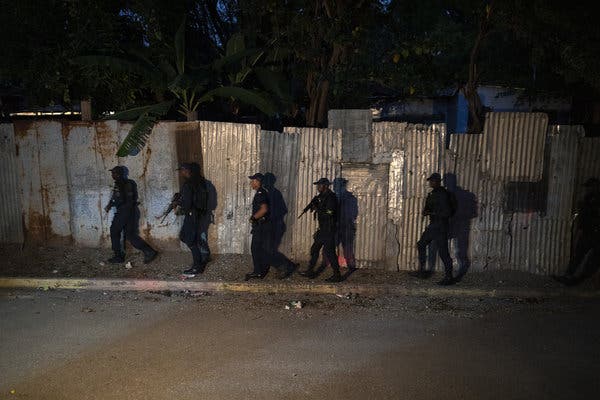 Hundreds of thousands of guns sold in the United States vanish because of loose American gun laws. Many reappear in Jamaica, turning its streets into battlefields.

CLARENDON, Jamaica — She came to Jamaica from the United States about four years ago, sneaking in illegally, stowed away to avoid detection. Within a few short years, she became one of the nation’s most-wanted assassins.

She preyed on the parish of Clarendon, carrying out nine confirmed kills, including a double homicide outside a bar, the killing of a father at a wake and the murder of a single mother of three. Her violence was indiscriminate: She shot and nearly killed a 14-year-old girl getting ready for church.

With few clues to identify her, the police named her Briana. They knew only her country of origin — the United States — where she had been virtually untraceable since 1991. She was a phantom, the eighth-most-wanted killer on an island with no shortage of murder, suffering one of the highest homicide rates in the world. And she was only one of thousands.

An outbreak of violence is afflicting Jamaica, born of small-time gangs, warring criminals and neighborhood feuds that go back generations — hand-me-down hatred fueled by pride. This year, the government called a state of emergency to stop the bloodshed in national hot spots, sending the military into the streets.

Guns like Briana reside at the epicenter of the crisis. Worldwide, 32 percent of homicides are committed with firearms, according to the Igarapé Institute, a research group. In Jamaica, the figure is higher than 80 percent. And most of those guns come from the United States, amassed by exploiting loose American gun laws that facilitate the carnage.

While the gun control debate has flared in the United States for decades — most recently after the mass shootings this month in El Paso and Dayton — American firearms are pouring into neighboring countries and igniting record violence, in part because of federal and state restrictions that make it difficult, or sometimes nearly impossible, to track the weapons and interrupt smuggling networks.

In the United States, the dispute over guns focuses almost exclusively on the policies, consequences and constitutional rights of American citizens, often framed by the assertion “guns don’t kill people, people kill people” — that the reckless acts of a few should not dictate access for all.

But here in Jamaica, there is no such debate. Law enforcement officials, politicians and even gangsters on the street agree: It’s the abundance of guns, typically from the United States, that makes the country so deadly. And while the argument over gun control plays on a continual loop in the United States, Jamaicans say they are dying because of it — at a rate that is nine times the global average.

“Many people in the U.S. see gun control as a purely domestic issue,” said Anthony Clayton, the lead author of Jamaica’s 2014 National Security Policy. But America’s “long-suffering neighbors, whose citizens are being murdered by U.S. weapons, have a very different perspective.”

Firearms play such a central role in Jamaican murders that the authorities keep a list of the nation’s 30 deadliest guns, based on ballistic matches. To keep track of them, they are given names, like Ghost or Ambrogio. 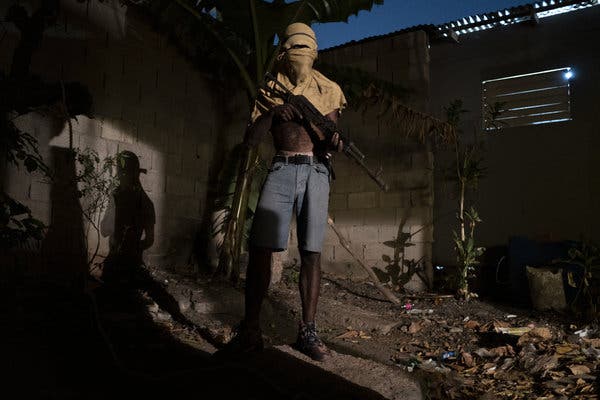 A gang member holding a Kalashnikov rifle at a house in Kingston, Jamaica

(I guess he doesn't know that's against the law.)

Much of the fighting today stems from political conflicts that stretch back long before the shooters were born. In past decades, armed groups loyal to one of the two major parties — the Jamaica Labour Party and the People’s National Party — battled one another for dominance.

But that, too, changed as the government cracked down on the Dons and targeted the drug trade in Jamaica. By 2010, the Dons were all but a thing of the past, with the last major player, Christopher Coke, known locally as Dudus, arrested and extradited to the United States after battles that resulted in the deaths of at least 73 people...

At around 11 p.m. on April 28, an off-duty policeman was having a drink at a local bar in Clarendon when two men showed up to rob it. One of them was Mr. Daley, who flashed the Browning at patrons and demanded money. The officer drew on the two men and announced himself, officials say.

Mr. Daley turned and fired, but the policeman had the drop on both men, killing Mr. Daley on the spot.

And like that, the gun was off the streets. 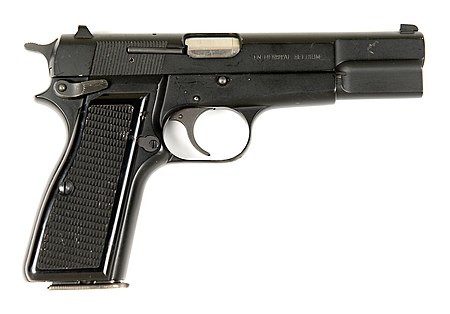 This is quite the tome. Jamaica banned guns in 1963 as I recall. So banning guns had little to no effect on the crisis requiring the army to be deployed. Mexico has done the same and is embroiled in a massive drug war and is awash in guns too. So as the law of supply and demand requires you cannot ban anything not even misery. We have misery because we have a drug war over another banned group of things narcotics. That is the disease. The guns and violence are the symptoms.

You should take note that the drug gangs rose from conflicts among the two main political parties which at some point of time must have formed governments. It would be logical to assume they allowed their various factions to arm themselves. So no law would interfere with the master of the law obfuscating it.

We also see that gun control creates an underground network supply of guns completely out of the control of authority save and except the authority of the gangs. That is the worst case scenario as we can see in the examples presented. It is anarchy at its best. The law of the jungle is the supreme law at that point. So if peace and order are the object of gun laws, the exercise is one of futility.

The other bit of math and science involved here is the path of least resistance. That appears to be the container ship and other conduits bringing in the drugs. Like other failed narco states, the people are trapped between a police state apparatus and a defacto state apparatus of criminal gangs. It sounds like heaven. Thank Satan they removed moral religious instruction from the public schools so there can't be the vaguest hope of redemption from the power of evil.

I take delight in the way the assassin was removed from circulation. An off duty policeman was carrying concealed, and Briana was removed from the cold dead hand of the drug soldier. As the Americans have learned by encoding in their sacred documents, it is the people who are and must remain the government. Had anyone along the sordid line had a concealed weapon perhaps the assassin would have been rendered mute long before as well as any other. However, the people must cower in fear of the gangs forever because they gave up their right to bear arms. It is only fitting the gangs and the political parties are in union. It is my surmise of the situation everywhere. The drug gangs are the tax collectors that ultimately support the political establishment through the organized crime nexus.

As long as we remain in this earthly matrix, there are two overriding forces. One is for good. One is for evil. Disarming any potential for good does not destroy evil. It exacerbates it as clearly observed in Jamaica and Mexico. I cannot wait for the days after gun control to mock our leaders after the situation gets worse and not better. Ban politicians for they have brought this carnage upon us.