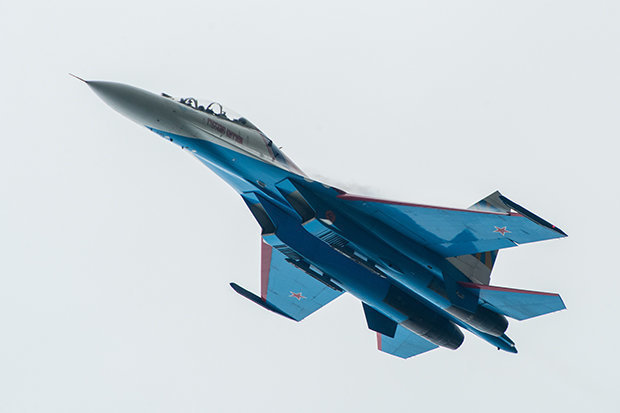 RUSSIAN fighter jets were mobilised five times this week to head off foreign military aircraft flying towards its territory.

The Russian Air Force planes chased away 22 foreign aircraft of unknown nationality during the past week, according to reports.

The foreign planes were escorted away from the border by the Russian jets and there were no territorial “violations”, Krasnaya Zvezda reported, citing defence sources.

The foreign aircraft were performing “reconnaissance missions”, the paper claimed.

The origin of the aircraft was not named in the reports, but the NATO alliance are known to operate reconnaissance missions near Russia’s border.

During the same period, the Russian Air Force carried out 267 training mission flights involving take offs and landings at 75 airfields across the country.

The British fighter jets were rushed to the Russian Su-24 FENCER aircraft, which was operating near airspace over the Black Sea.

The jets were deployed from Mihail Kogalniceanu Air Base near Constanta in Romania, where RAF officers are stationed.

Elsewhere in the Baltic region – another flash point – NATO aircraft were scrambled to escort Russian planes on six separate occasions between July 9-13, according to the Lithuanian Ministry of Defence.

Tensions between US-led NATO and Russian have been particularly acrimonious since the 2014 annexation of Crimea overseen by president Vladimir Putin.

Last month, Estonian authorities lashed out at Russia after Putin’s presidential plane entered NATO airspace without clearance ahead of his summit with US President Donald Trump in Helsinki.

Since the annexation of Crimea in 2014 – a move deemed illegal by the international community – eastern and northern European states have been anxious about Russian militarism.

Amid tensions with NATO, Russia has dramatically increased its military presence in the Baltic region during the past few years.

Kaliningrad – an exclave of Russia – has been called the "most dangerous place in Europe" following reports the Kremlin deployed short-range Iskander ballistic missiles in 2013.

Trump strong-armed European NATO members into paying more towards the collective defence budget at a summit of of leaders in Brussels last month.

Nearly half of Americans believe that the US should not be required to defend NATO allies from attack if they do not spend more on defence, according to a Reuters/Ipsos poll.