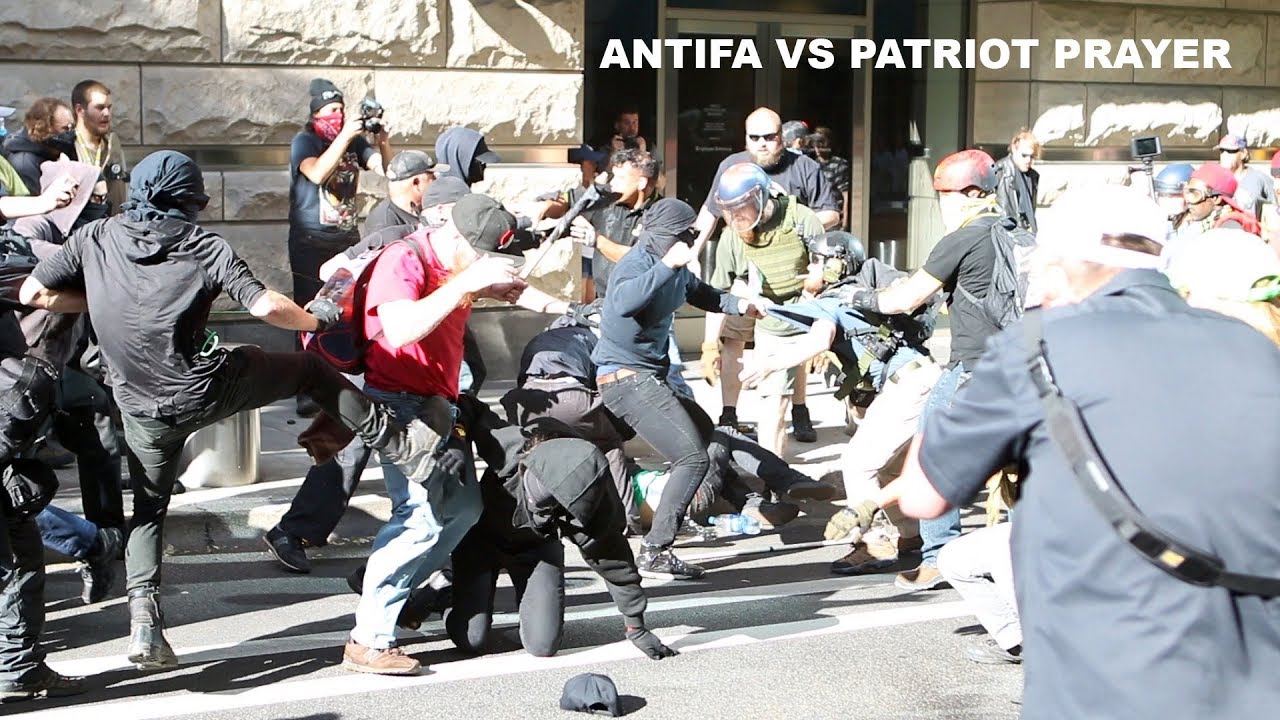 On Friday, Michael Moore went on Bill Maher’s HBO show and suggested that the U.S. military would side with progressives in a civil war against Donald Trump. You can watch Moore make these comments on YouTube right here. The very next day, Antifa thugs violently clashed with pro-Trump conservatives that had gathered for a prayer rally on the streets of Portland, Oregon. Flash-bang grenades were thrown by Antifa activists, the police confiscated “mace, clubs, gloves with reinforced knuckles, batons, knives and handgun clips”, and many were injured and had to be taken to the hospital. The violence was so dramatic that some are actually calling this the first skirmish in America’s next civil war. Last week, a shocking poll found that 31 percent of all Americans believe that there will be a civil war in America within the next five years and that 59 percent of Americans believe that Donald Trump’s opponents will resort to violence. But after the events of this past weekend, we no longer have to wonder if civil unrest is coming to America. Civil unrest is already here, and it is going to get much worse in the months ahead.

The next several months are being billed as a “summer of rage”. Progressive leaders continue to insist that they are “the majority” and that it is time for them to “start acting like the majority”.

Of course they aren’t talking about mobilizing voters and taking the country back at the polls in November.

Instead, they are talking about more direct action.

For example, Michael Moore told Bill Maher that if they don’t act now, Americans are going to deeply regret not rising up against “fascism” while there was still time to do so…

Documentary filmmaker Michael Moore was fired up on Friday night’s “Real Time,” telling host Bill Maher that now is the time to stand together to stop the “madness” in the Trump administration, even comparing it to the dystopian world seen in “The Handmaid’s Tale.”

“We are living ‘The Handmaid’s Tale,’” Moore said. “This is a serious point. The best part of the show is the flashbacks, where she tries to figure out where was the point where it was too late. Where was the point that if we all just had risen up, just done something? But because it happens in little increments. That’s how fascism works.”

And Michael Moore certainly intends to be at the tip of the spear.

In fact, he also told Bill Maher that he plans “to join a million other Americans to surround the United States Capitol” to protest Donald Trump’s nominee for the Supreme Court.

Of course we don’t even know who the nominee will be yet. There are rumblings that it could be Amy Coney Barrett, and if that is the case the left is really going to freak out then.

Chris Matthews of MSNBC is speaking in apocalyptic terms as well. He says that this is a time “to fight”, and he is convinced that “it’s gonna be almost like Spanish Civil War stuff”…

“So I would say I think this is gonna be the fight of the century,” he told MSNBC. “I think the Democrats have to say no way. No one passes this line. I think it’s gonna be almost like Spanish Civil War stuff – you watch!”

“It’s time for Democrats to play Hardball,” he added. “I’m Chris Matthews and I’m urging them to do just that. There are times to fight and this is one of them.”

I don’t think that most conservatives really understand what is happening.

These radical leftists are ready to put their lives on the line. They are entirely convinced that Donald Trump is another version of Hitler and that Trump supporters are all a bunch of fascists, and they truly believe that they need to do whatever is possible to fight “the rising tide of fascism” in this country.

The following excerpt from an opinion piece by Charles M. Blow in the New York Times is a glimpse into how these crazed progressives currently view Donald Trump…

He is a racist who disparages black and brown people, whether they be immigrants, Muslims, people from Haiti and Africa, Barack Obama, the mayor of San Juan or Maxine Waters. People equivocate about it and excuse it.

He is attacking the press in the most aggressive of terms so that what they reveal about him will be viewed with skepticism.

He is attempting to weaken our institutions, our protocols and conventions, our faith in the truth, our sense of honor and our respect for the rule of law.

To these progressives, there is no greater cause then resisting Donald Trump and trying to take America back.

During his conversation with Bill Maher, Michael Moore insisted that the “moment is now” and that this movement is something worth giving your life for…

“What are people willing to commit to? What would you give your life for?” Moore said. “What would you be willing to actually put yourself on the line for? That moment is now. We are going to lose our democracy if we haven’t already. We have no choice, my friends. We all have to rise up.”

When people are ready to die for a cause, suddenly they will do things that they would not normally do.

Normally, Americans do not throw flash-bang grenades at one another, but that is precisely what happened in Portland over the weekend. Trump supporters that had gathered to pray were caught unprepared for the violence that erupted, and one woman was entirely convinced that Antifa had come down there to “try to murder us”…

‘They were throwing rocks, they were throwing bottles, you need to tell the truth,’ one middle-aged woman in a Make America Great Again hat said after the clashes, addressing media in remarks caught on camera.

‘No one on our side did anything violent, everything was self defense,’ she claimed. ‘You guys have to stop it because you’re encouraging these people to come down here and try to murder us.’

You can watch five minutes of footage from the Portland riot here. Even though I have been warning that this is coming for a very long time, even I was greatly shocked by the ferocity of the violence.

The thin veneer of civilization that we all take for granted is rapidly disappearing, and it is going to be exceedingly hard to stop civil unrest from erupting in major cities all over the nation.

As I end this article today, let me leave you with an ominous warning from a progressive that was just published by the Washington Post…

The backlash is coming. It is the deserved consequence of minority-rule government protecting the rich over everybody else, corporations over workers, whites over nonwhites and despots over democracies. It will explode, God willing, at the ballot box and not in the streets.

You can only ignore the will of the people for so long and get away with it.

http://theeconomiccollapseblog.com/archives/civil-unrest-is-here-violence-erupts-
in-american-streets-as-progressive-leaders-urge-their-followers-to-rise-up-and-prepare-for-a-summer-of-rage
It seems like the real traitors to the republic are Michael Moore and company. Antifa was originated in Germany. They ought to know the level of complicity. One of their manuals was found in their previous attempts to seed revolution. They are a paid rent a mob attempting to create the crisis that causes a reaction and brings in a New World Order. They are hard core communists. So technically America isn't exactly facing a civil war but a communist insurrection. Since they executed Christians in the extreme back in 1917 we know what we can expect if they get the levers of power. Don't doubt George Soros isn't involved in this. Evil feeds on evil. They have the means to seed it into the minds of people. They've done it in other countries with color revolutions. The politics of hate is wearing a mask and battling in the street. The prayerful are the hope for a better world.