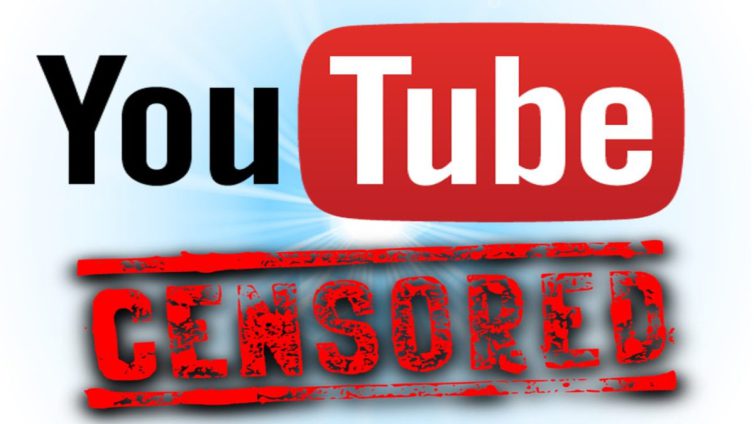 In the last few months YouTube has begun the oppression of free thought and censored yet another independent media channel, The Power Hour.

Google, YouTube, and Facebook have been ramping up it’s censorship and banning of conservative and second amendment groups with points of view they do not agree with like James Fetzer, the Health Ranger, Infowars, and now The Power Hour.

We need you to help us in standing for freedom and the ability to think for yourself. Please Share this post everywhere.

What you can do to fight back:

Help us fight back against YouTube censorship of free speech. Here are some actions you can take:

Tweet @YouTube and @TeamYouTube to denounce their censorship. You can let them know how much you appreciate the valuable information on The Power Hour Channel

Call on your members of Congress to launch a civil rights investigation into YouTube, Facebook, Google and other tech giants. Their tyranny needs to be called out, and YouTube needs to be regulated to halt their out-of-control censorship.

The Video’s in Question:

On May 20, 2018 our video “The Power Hour – James Fetzer – October 3, 2017” was flagged for review. Upon the review, YouTube determined that it violates their guidelines and we received a our third Community Guidelines strike.

YouTubers share their opinions on a wide range of different topics. However, there’s a fine line between passionate debate and personal attacks. As our Community Guidelines outline, YouTube is not a platform for things like predatory behavior, stalking, threats, harassment, bullying, or intimidation. We take this issue seriously and there are no excuses for such behavior. We remove comments, videos, or posts where the main aim is to maliciously harass or attack another user. If you’re not sure whether or not your content crosses the line, we ask that you not post it. 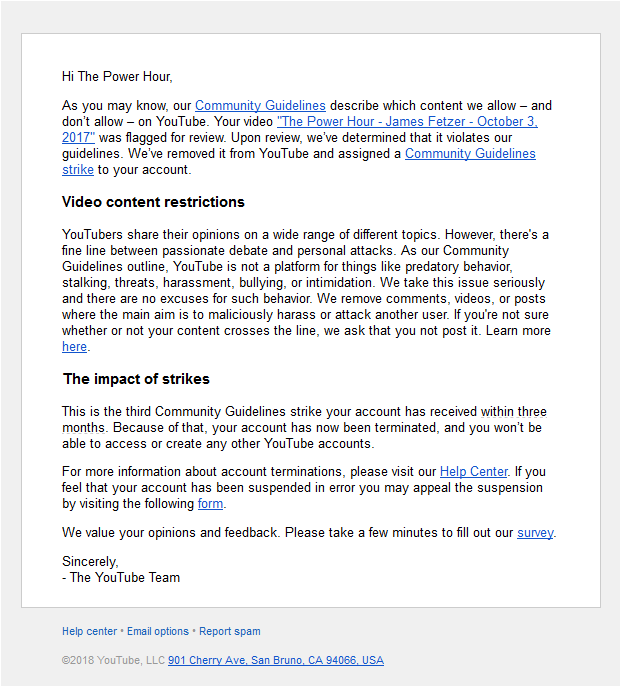 Our video’s determined by YouTube to violate the community guidelines:

The Impact of the Strike’s:

This was the third Community Guidelines strike that our account has received within three months. Because of that, oir account has now been terminated, and we cannot access it to create any other YouTube accounts.

Here are the archives of the interviews that were used to create the YouTube video’s in question:

There are plenty of shills on YouTube. This is the acid test. These are the acrid topics the deep state wishes concealed.

I think we can safely say them's fighting words.