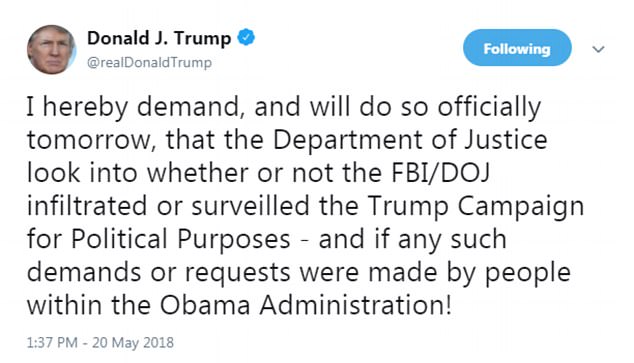 Reports suggest he was Professor Stefan Halper, American working in the UK

Is said to have 'randomly' brought up Russia in meetings, prompting suspicions 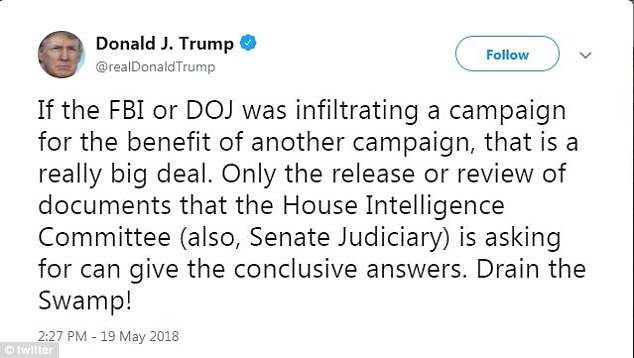 The Department of Justice will hold a potentially explosive probe demanded by Donald Trump into whether the FBI snooped on his campaign.

Following Donald Trump's demand that the DoJ investigate his allegation that the Obama administration's FBI 'infiltrated or surveilled' his 2016 campaign, the agency directed its Office of Inspector General on Sunday to formally probe those claims.

Deputy Attorney General Rod Rosenstein said in a statement that '[i]f anyone did infiltrate or surveil participants in a presidential campaign for inappropriate purposes, we need to know about it and take appropriate action.'

Jeff Sessions, the Trump administration's attorney general, recused himself last year from all matters related to Russian election meddling since he was an adviser to the president's campaign.

The move opens the way for a new and potentially explosive front in the relitigation of the 2016 election: whether President Obama's Justice Department oversaw politically-motivated spying.

President Trump tweeted Sunday afternoon that he planned to 'officially' ask 'that the Department of Justice look into whether or not the FBI/DOJ infiltrated or surveilled the Trump Campaign for Political Purposes.'

The tweet came after multiple reports that the FBI had sent an informant to speak with campaign advisers about matters related to possible Russia ties.