INFORMATION AND COMMUNICATION DEPARTMENT OF THE SECRETARIAT OF THE CMU

Ukraine offers Canada to consolidate efforts in order to implement a number of projects in the aerospace industry, including airplane engineering, satellite construction and creation of platform for space launches. Prime Minister of Ukraine Volodymyr Groysman announced this, while delivering a speech at the Canadian-Ukrainian Round Table on cooperation in the aerospace sector in Montreal. The Head of Government took part in the said event in the framework of an official visit to Canada.

The Prime Minister emphasized that Ukraine has good aviation and space traditions, which should be preserved and multiplied. At the same time he stressed the existing difficulties in preserving the technology sector, especially in the context of the hybrid war and the actual loss of aviation markets that have been traditional for Ukraine. For this very reason, Ukraine is interested in the partnership.

«There are ample opportunities between Ukraine and Canada that we can use in the aerospace sphere. Ukraine is a space state, we have a considerable experience, a science that can be very essential at this level of our cooperation», noted the Head of Government. «Our experience, combined with the experience of Canadian partners, can bring a result. We can open a new page in our relations, and we want to be reliable partners».

Volodymyr Groysman placed a special emphasis on the range of possible areas of cooperation in the aerospace industry: from the development of the Arctic region of Canada, the production of aircraft and flight simulators to the peaceful exploration of space as well as the development of space science.

The Ukrainian aviation industry has unique products. It is not just about famous cargo aircrafts, namely Antonov An-124 «Ruslan» and Antonov An-225 «Mriya».There are also unique short landing and take-off aircrafts created on the An-70 platform.

«The Government is committed to adopting all necessary decisions and creating all favorable conditions forfruitful strategic cooperation. We are ready to guarantee the provision of all instruments that will contribute to such success», the Prime Minister underscored.

Ukraine and Canada are discussing a number of joint projects. In particular, the construction of the An-132 (engines supplied by Pratt & Whitney Canada), as well as the creation of the platform, which is being built, for space launches in Nova Scotia, Canada. The project is planned to be implemented by Maritime Launch Services and the SE "Design Bureau "Yuzhnoye" name after Yangel". At present, the initial concept of the implementation of this project has been agreed upon. Moreover, a project on cooperation between Canadian and Ukrainian enterprises concerning the launch of nanosatellites with the help of the Microspace-2 aerospace launch system is being worked out now.

I don't see this as a good thing. The Ukraine is at war with Russia. The most logical conclusion one could draw would be they are fitting their rockets with nuclear weapons. The Ukraine was a nuclear power not that long ago after the breakup of the Soviet Union. They are establishing a rocket base in Canso, Nova Scotia. I see that as a research and development project under the protection of NORAD and NATO. Canada is totally committed to the Ukrainian cause. I see Emperor Justinian is acting as a Dr. Strangelove character if he thinks he's going to pull a fast one on the Russians. All he is doing is entrenching Canada as an enemy of Russia. We will pay dearly for that when push comes to shove. Our media will stay silent. Our citizens will remain seated on their brains. The Ukraine was moving tactical missiles recently as well.

They gave Justinian Ukrainian socks to square the deal. 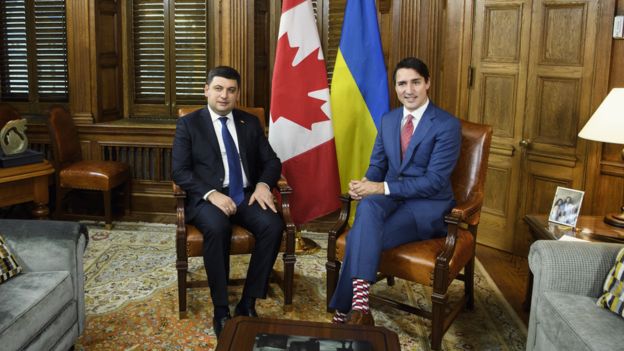