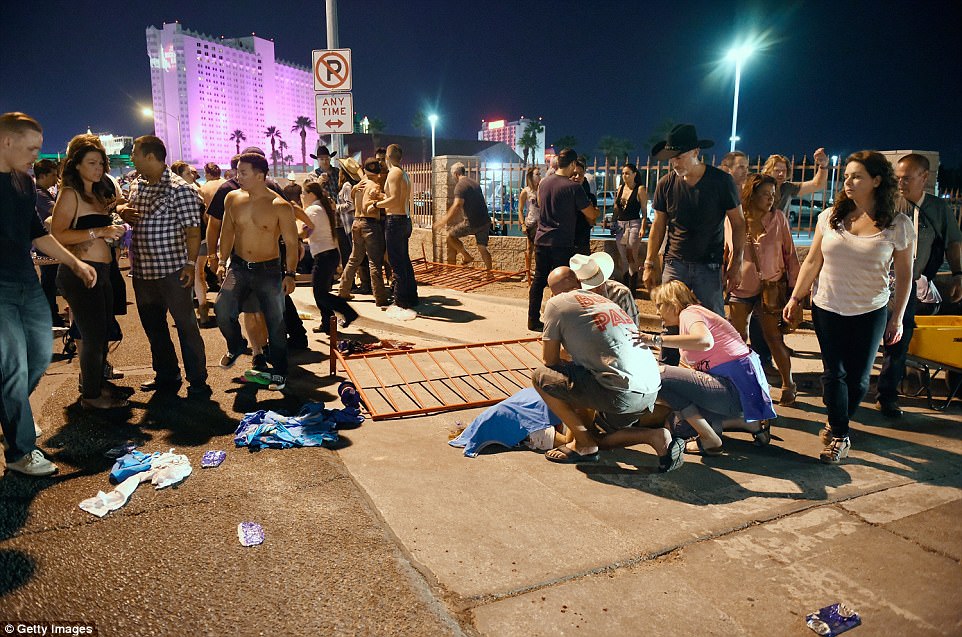 People tend to the wounded outside the festival ground after the shooting. One person can be seen with a shirt draped over their face; it's not clear if they are dead

(There's no blood on the ground or the sheet so that is hardly likey.)

Cops have located Marilou Danley, described as Paddock's 'companion' and roommate, for questioning 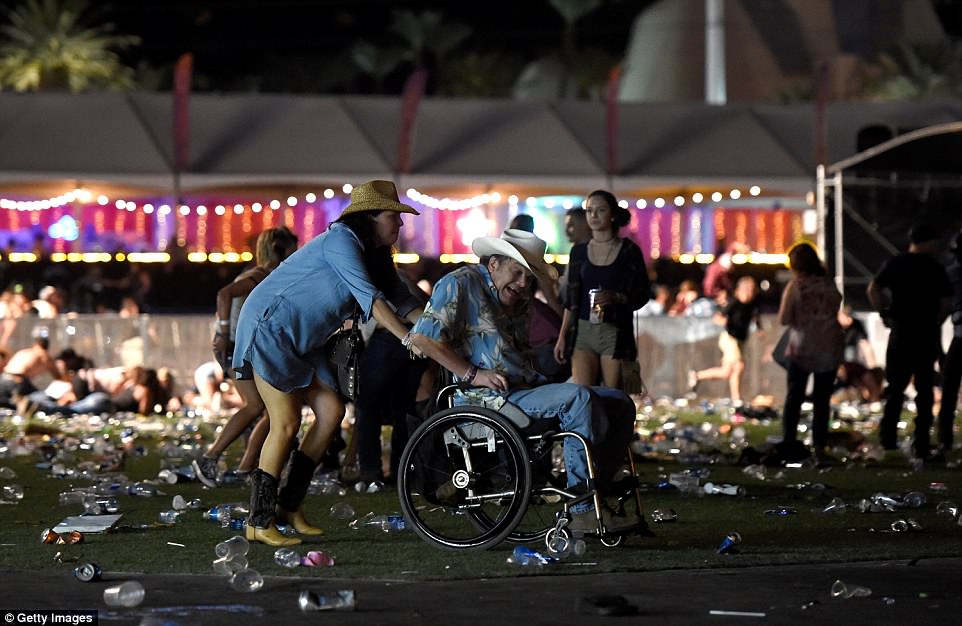 A man in a wheelchair, apparently in distress, is taken away from the festival in the wake of the shooting

(This technique hasn't been in use since the Boston bombing.)

America is reeling from the worst mass shooting in its history after at least 50 people were killed and more than 200 wounded at a country music festival in Las Vegas on Sunday night.

Police say the shooter was 64-year-old Stephen Paddock, a resident of nearby Mesquite, Nevada, who opened fire on the Route 91 Harvest Festival in Las Vegas Village from a room across the street in the Mandalay Bay Hotel shortly after 10pm.

Officers say Paddock was shot and killed after they breached a room in the hotel, where he had stashed an 'arsenal' of weapons used during the massacre.

Investigators are now raiding the Mesquite home he shared with Marilou Danley, described as his 'companion' and a person of interest. Police say they have located Danley, but didn't specify whether she was in custody.

Sheriff Joseph Lombardo, of the Las Vegas Metropolitan Police Department, said investigations are still ongoing and police have not yet determined a motive.

President Donald Trump paid his respects on Monday morning after the shooting, writing on Twitter: 'My warmest condolences and sympathies to the victims and families of the terrible Las Vegas shooting. God bless you!' 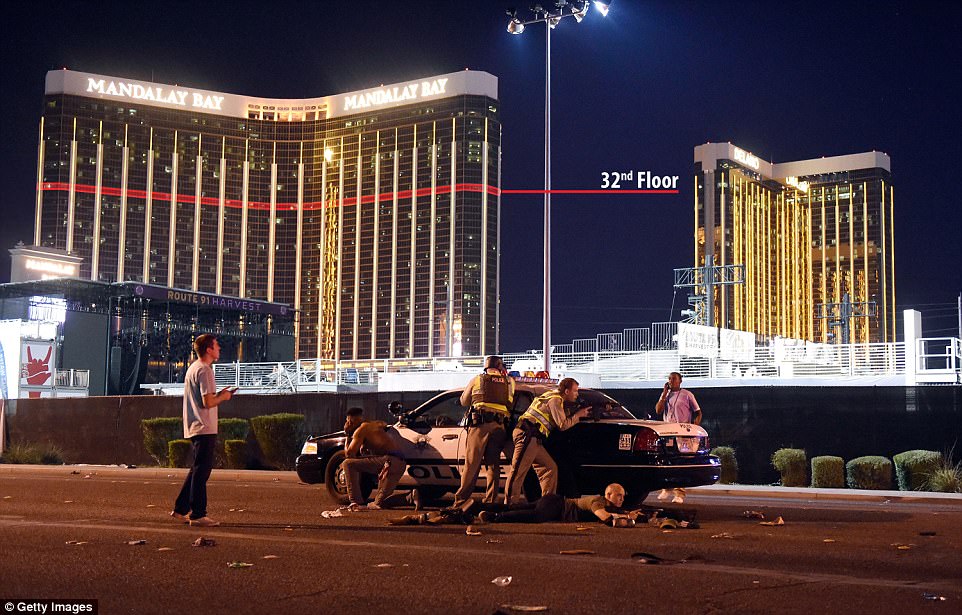 Police on guard on the streets outside the Mandalay Bay. The shooter was killed inside the hotel

(This guy is either stupid or a director for the filming. How is he allowed to get into a police cordon and expose himself to danger?)

The formula for fake in a mass casualty event has knowledge and coverage for mass consumption ready before the blood dries or the opportunity to form thoughts occurs. We are led down the garden path to a created reality. Foremost among these are the Action Jackson poses of the various security forces. They are under cover pointing arms at the mystical assassin while the photographer stands 'heroically' in the open ready to brave hostile fire from forces unknown. The big question a compliant public never asks is how did he get through the security cordon and why did the authorities allow it? 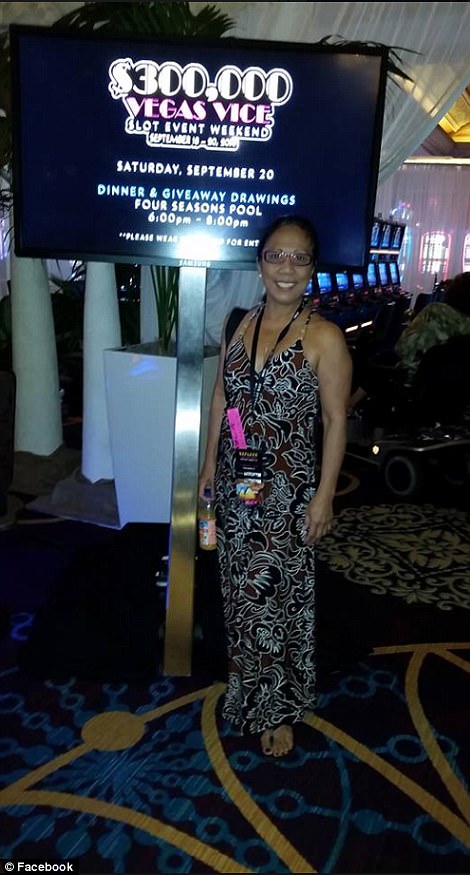 Danley is described as an Asian woman, around four feet 11 inchest tall and weighing 111lbs. Police are also seeking two cars owned by the shooter: a Hyundai Tucson, license plate 114 B40, and a Chrysler Pacfica, license plate 19D 401.

Another facet of the fraud is the story is neatly rounded up in a short period of time. We have identified the shooter who is conveniently killed and his accomplice and their backgrounds. You'd think we had their resumes in advance.

The fraud usually has a bizarre taste of foreknowledge of the event like the woman screaming we're all going to die an hour prior to the event. 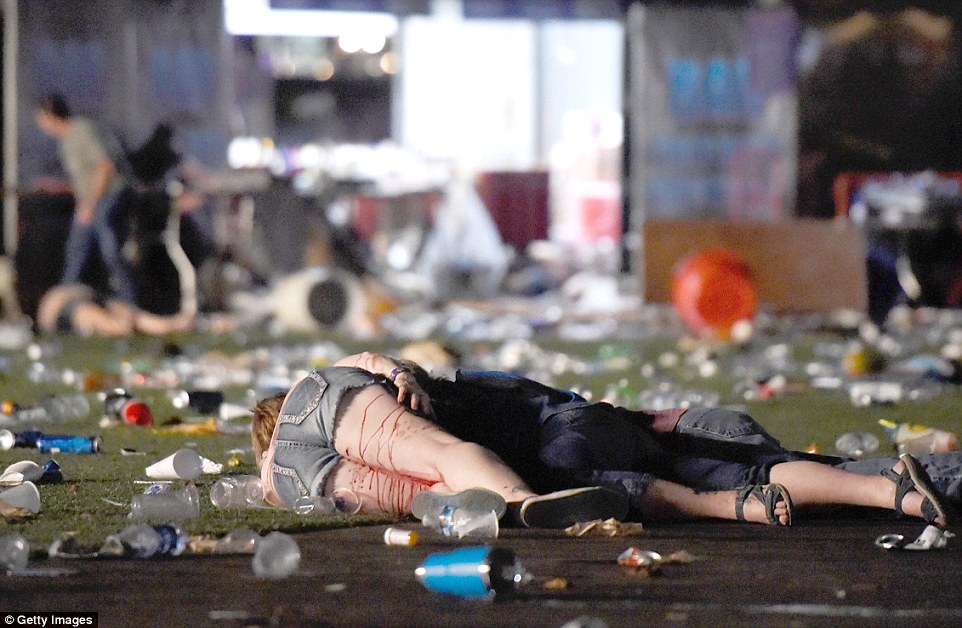 Three people lie on the ground, one covered in blood, after the shooting at the Route 91 Harvest country music festival on Sunday

(They are clearly not dead. There is no cyanosis as described below. If they are wounded, wouldn't first aid be a greater priority rather than photography? Even more poignant, the 'victim' hasn't voided the bladder which is impossible to control post mortum or in trauma.)

Then there's the graphic content. I remember the Vietnam War coverage. There's nothing really graphic here. It looks more like a drill mass casualty event. That is the wooden stake through the heart after all - the fact a drill went live. We'll find that out soon I imagine as the blogosphere comes to life. 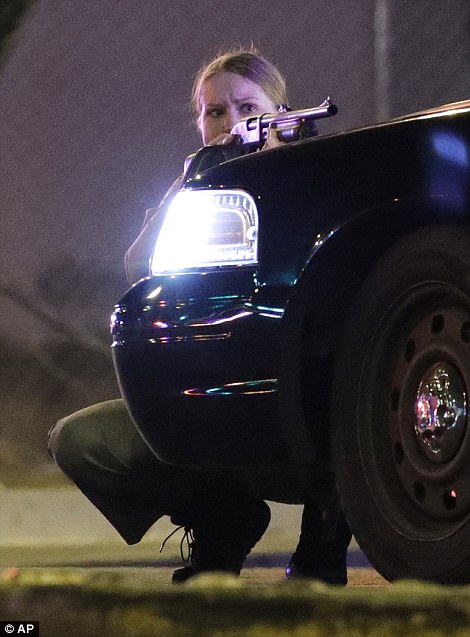 (What cop is going to let someone stand in front of a loaded shotgun while they take cover in shooting event? What idiot would actually do it? A method actor of course.)

With what we are presented with here the wounds do not appear to support the byline. I see no large blood pools from arterial blood loss. In the image with a female with blood trickling on her leg, there is no cyanosis turning blue. It can't be helped or stopped. The body ceases to pump oxygenated blood. If you don't see cyanosis, you are not looking at a dead body. If the flesh is still pink and fully oxygenated, we are being deceived.

(Generally, people look the same upon dying- whether from natural causes or specific cause such as a heart attack.

The skin tends to be ashen- pale or with a blue cast.

After the heart stops, the blood begins to respond to gravity and the person gets what is referred to as "dependent lividity" or livor mortis. This causes the top part of the body to turn pale while the bottom parts turn a mottled, purplish-blue from the pooling of blood.)

The NWO always puts on a good show.

We react accordingly with fear and panic.

Of course we can click our heels and return home by turning off mainstream mass mind control media. Then the man behind the curtain loses his power over you.