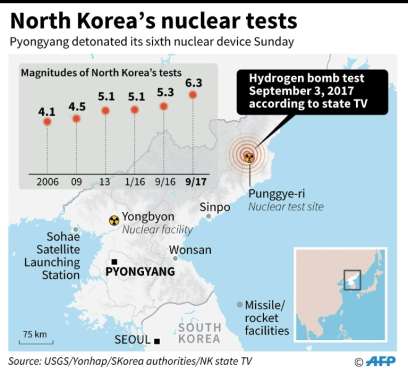 China and Japan said on Monday they had not yet detected any atmospheric radiation from North Korea’s nuclear test, amid fears of a leak from a “cave in” during the underground blast.

Japan’s top government spokesman Yoshihide Suga told reporters there was “nothing special detected from monitoring posts across the country”, nor from air samples taken by the Air Self-Defence Force after Sunday’s blast.

China’s environment ministry said on Monday that radiation levels near its Korean border were also normal.

“Results of monitoring make clear that this North Korean nuclear test as of now has produced no effect on our nation’s environment or the public,” the ministry wrote on its official website.

Fears of a leak from North Korea’s detonation of what it claimed was a hydrogen bomb came after Chinese monitors detected a second tremor soon after the initial earthquake triggered by the blast.

The monitors said the second tremor, of magnitude 4.6, could be due to a “collapse [cave in]”, suggesting the rock over the underground blast had given way.

The resulting explosion was considerably larger than previous tests and was felt by residents in Chinese cities hundreds of kilometres from the North Korean border.

Look for the words of fake news like appears. This isn't the first time there was no radiation detected either. Their first test happened around the time a massive conventional explosion occurred near the test site. That implies they were using the Richter scale to substantiate what never really happened. Their paraded missiles looked fake as well. So without radiation it can be surmised that the tests are a ruse commonly used in the art of war to make an adversary believe you have greater combat abilities than you actually do.

We have been warned are expecting 'The October Surprise'. Speculation hinted that it would be in Iran. However, North Korea was the chosen venue this election year saving the Bush Administration from pulling Osama out of their hat for now.

Right from the very beginning this writer smelled something rotten in Pyongyang. First and foremost there was no radiation detected. Unless North Korea has developed an environmentally friendly bomb, it's a fraud. In a nuclear explosion underground the bomb will vaporize everything around it including rock. The ground will collapse forming a recession crater. The collapsing material allows particulate material to escape. It should have been hot, hot, hot.

There were conflicting stories about the magnitude of the jolt and whether or not it was detected.

The North Korean statement said there was no radioactive leakage from the test site. An official at South Korea's seismic monitoring centre confirmed that a magnitude-3.6 tremor felt at the time North Korea said it conducted the test was not a natural occurrence... 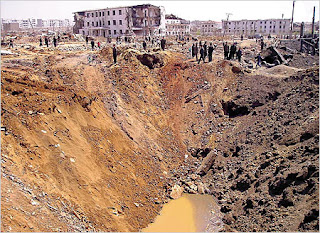 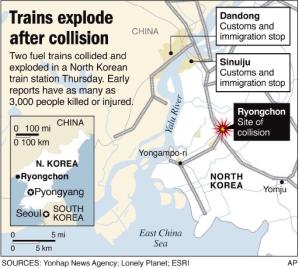 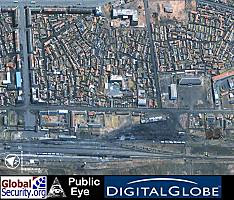 Pre-explosion overview of the area of devastion (Source: DigitalGlobe 13 May 2003) 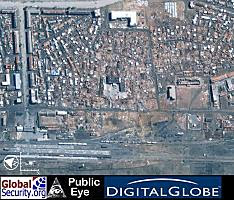 Overview of the area of devastion

This rail station and the test site are both north of the capital Pyongyang. I suspect the trains were heading for the test site. An accident prevented their arrival and almost got the big guy. That could have been the two for one special if an intelligence agency was doing what they should have been doing. Fate made it The October Surprise.

Further pictures at link above: