Planned Chaos In Virginia: Why Did Law Enforcement Stand Down Until Events Spiraled Out Of Control? By Susan Duclos - All News PipeLine

A day before the events that spiraled out of control in Virginia, resulting in one death and dozens of injuries, the Virginia Governor Terry McAuliffe issued a statement warning people to "stay away" from Charlottesville, stating in part "In advance of [Saturday's] rally there have been communications from extremist groups, many of which are located outside of Virginia, who may seek to commit acts of violence against rally participants or law enforcement officials."

EVERYTHING WAS PLANNED IN ADVANCE

The fact that the Governor issued that statement before the planned White Supremacist "Unite The Right" rally even began, tell us a number of things, such as the even was planned, permits were obtained and the state authorities were aware that outside groups were coming in for the specific purpose, in the governor's words, to "commit acts of violence against the rally participants."

Which is exactly what happened.

It is also important to highlight, and hammer the point home, that the media consistently attempted to conflate different groups, misleading their audience by labeling the protesters as "alt-right" and "white nationalists," rather than accurately pointing out they were "white supremacist," which is a very important distinction.

Nationalist, via Merriam Webster: 1) an advocate of or believer in nationalism 2) a member of a political party or group advocating national independence or strong national government.

Supremacist, via Merriam Webster: 1) an advocate or adherent of group supremacy.

Whether one agrees or vehemently disagrees with the "message" espoused at the planned and approved white supremacist rally, the reason they were given the permits is because whether we like their message or hate it, it is their First Amendment right to be able to hold their rally... free speech.

The point here is the rally was planned. The governor supposedly planned for potential violence as his statement before the event also said "In the event that such violent or unlawful conduct occurs, I have instructed state public safety officials to act quickly and decisively in order to keep the public and themselves safe," and the "outside groups" planned to commit violence against the rally participants. WAS LAW ENFORCEMENT TOLD TO STAND DOWN?

If law enforcement was ready, aware of all these plans, as was the governor of Virginia, how did things spiral out of control to the point where one person was killed, and 19 were injured when a car plowed through counter-protesters?

According to Seattle.PI, police are being criticized for the slow response to the violence that started even before the rally began, for failing to keep the rally participants and counter protesters apart:

Anger over the how police responded came from all directions and intensified after the deaths of a woman struck by a car that plowed into a group of counter protesters. Experts said police appeared outnumbered, ill-prepared and inexperienced.

"The worst part is that people got hurt and the police stood by and didn't do a godd---- thing," said David Copper, 70, of Staunton, Va., after an initial morning melee at a park that when unchecked by police for several minutes.

Fourteen people were injured in clashes; nine others were hurt in the car crash. Later, two Virginia State Police troopers were killed when their helicopter smashed into trees at the edge of town and burst into flames. The loss of police officers only compounded the calamity on a day that pushed police, city officials and residents to their limits.

Cable news replayed a seemingly endless loop of the early violence at Emancipation Park, where police in riot gear had surrounded the expanse on three sides, though seemed to watch as groups beat each other with sticks and bludgeoned one another with shields. Many on both sides came dressed for battle, with helmets and chemical irritants.

Police appeared at one point to retreat and then watch the beatings before eventually moving in to end the free-for-all, make arrests and tend the injured.

The governor claimed beforehand that he "instructed state public safety officials to act quickly and decisively," yet multiple reports and witnesses say the police watched the events spiraling out of control and did nothing until it was too late? One has to be wondering right about now, what McAuliffe's definition of "quick" and "decisive" really is.

Were police told to stand down, allow a free-for-all and only step in after the media got their "violent images" in order to cast blame? WHO IS REALLY TO BLAME?

The DOJ is investigating what occurred that resulted in the death of one and injury of nineteen others in the incident with the car, and politicians are playing up the whole ordeal for political points, calling it domestic terrorism, President Trump has condemned "hatred, bigotry and violence on many sides," and reporters are busy spinning all of the events and pointing fingers at the rally itself and their participants, and while we at ANP do not espouse white supremacy rhetoric, the event was planned, and the authorities were informed beforehand, again, according to the governor, that "outside" agitators were coming for the specific purpose of committing violence against the rally participants, so really who is to blame here for the chaos that ensued?

Make no mistake, if the man being accused of ramming into counter-protesters did so with the intent to harm people, he should be held accountable for his own actions, but who should be held accountable for the events leading up to that? The people that obtained a permit to utilize their free speech rights, whether that speech is offensive to others or not, or the groups that came from the outside with violent intent? Or the governor himself for knowing what was going to occur beforehand and allowing it to play out?

Another aspect we haven't seen discussed is whether any of those outside groups were "paid actors," as we have noted from previous riots and protests that many supposedly grassroots activists were hired by companies to attend events.

For example, a Craigslist advertisement, six days ago was looking for Actors and photographers for Charlotte, NC, stating in the ad from Crowds on Demand, that their events "include everything from rallies to protests," showing that not all rallies, protests and counter-protests are activism driven, but many times people are paid to attend and even start trouble. 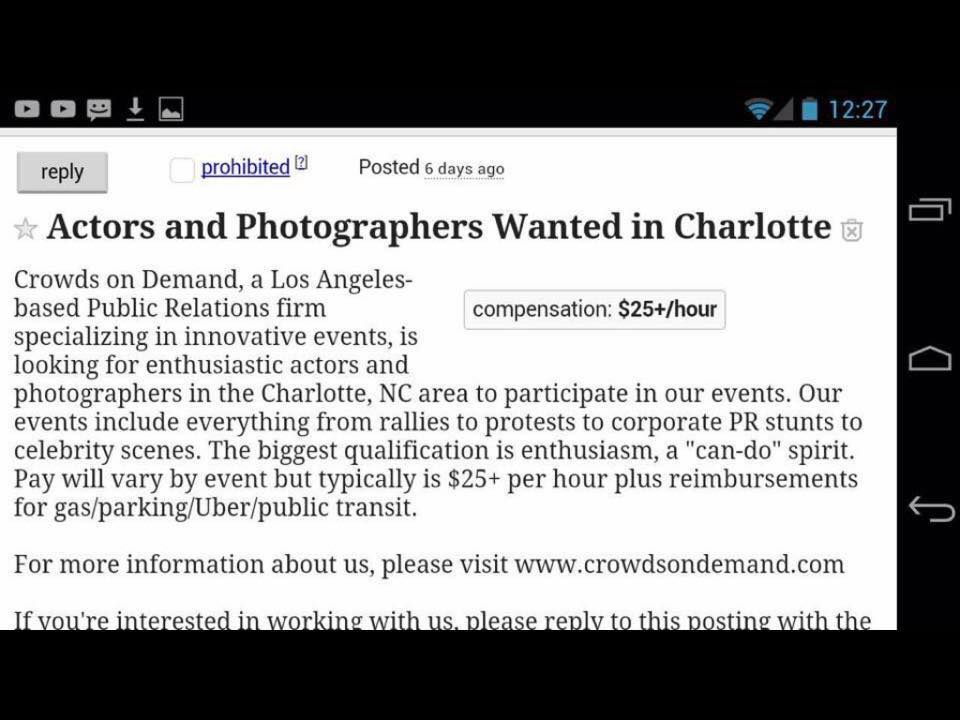 Maybe we should keep our eye on Charlotte, NC. next to see if anything pops there.

Until the investigation has been completed, removing all speculation and spin from the narrative, what we know as a fact is that everything that occurred was planned, or planned for, and still was allowed to play out so the media and politicians could promote their agenda messaging, which resulted in the death of one and the injury of dozens of others.

That is the story the MSM isn't reporting.

In this case, President Trump seems to be the only one calling it as it is, an agenda of violence and hatred, from many sides, to divide the nation even more.