Woman, 32, mowed down and killed while protesting hate-fueled white supremacist march in Virginia 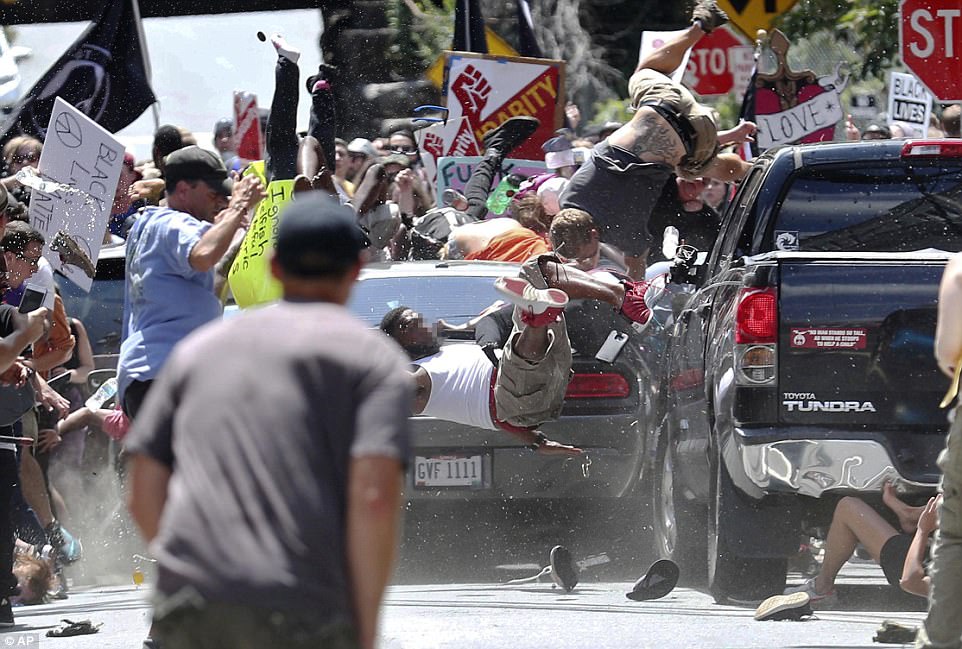 The Dodge Challenger (pictured), which is registered to Fields, plowed into counter protesters, killing one woman and hospitalizing 19 others, as violence erupted at a rally where thousands of white nationalists gathered for an alt-right event in Charlottesville, Virginia, on Saturday. Police said a total of 35 people were treated for injuries

Heather Heyer, 32, was protesting hate-fueled white supremacist march in Charlottesville on Saturday when James Alex Fields Jr, of Maumee, Ohio, allegedly plowed his vehicle into the crowd, killing her

'She died doing what was right. My heart is broken, but I am forever proud of her,' Heyer's mother said

Heyer, a paralegal and native of Greene County was passionate about social justice and her final public Facebook post, dated from 2016, read: 'If you're not outraged, you're not paying attention'

The Dodge Challenger was filmed ramming into a line of people, then reversing quickly away from the scene 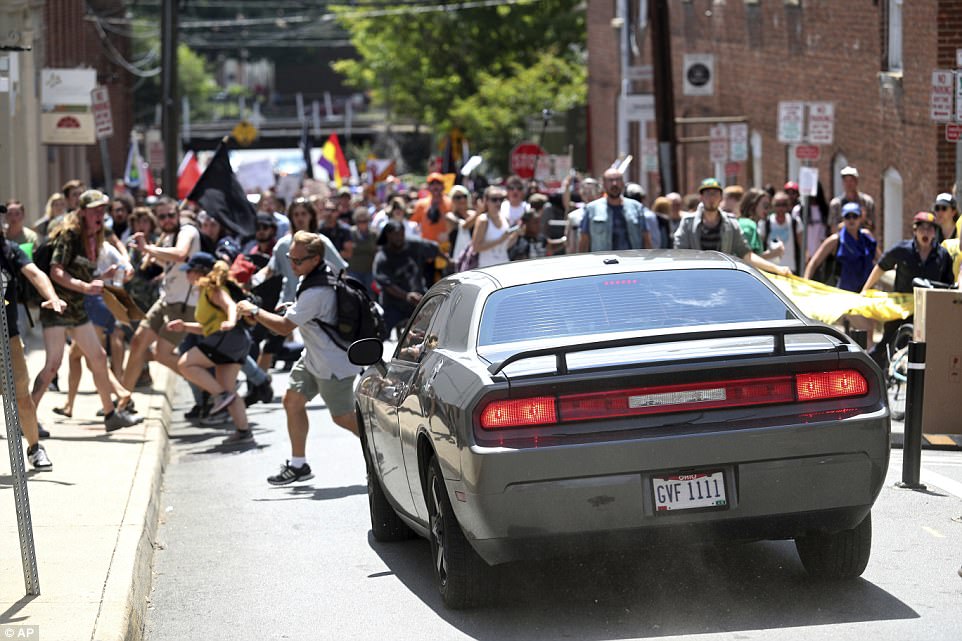 (Notice the brake lights are on. I don't think the car is even moving at this point. The black truck in the upper photo hasn't graced the stage either.)

The woman who was mowed down and killed at an anti-fascist rally in Virginia has been identified as Heather Heyer.

Heyer, 32, was protesting hate-fueled white supremacist march in Charlottesville on Saturday when James Alex Fields Jr, of Maumee, Ohio, allegedly plowed his vehicle into the crowd, killing her and injuring 19 others.

Fields Jr, who is being held at the Albemarle-Charlottesville Regional Jail, has since been charged with second-degree murder. 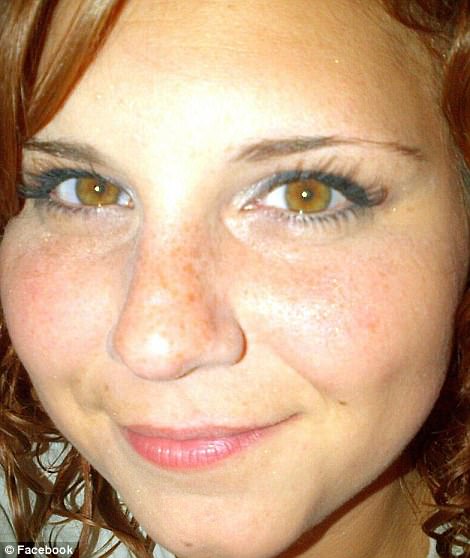 'She died doing what was right. My heart is broken, but I am forever proud of her,' Heyer's mother, who has not been named, wrote on a GoFundMe Page set up for the family.

Heyer has been hailed as a 'hero' online after she was killed standing up to racism.

There's something not quite right with this event. The car appears in different positions in different conditions. The man in the air in the top photo has his face obscured. There are lots of shoes and few bare feet. The man tossed in the air doesn't appear to be in front of the car in the preceeding image. 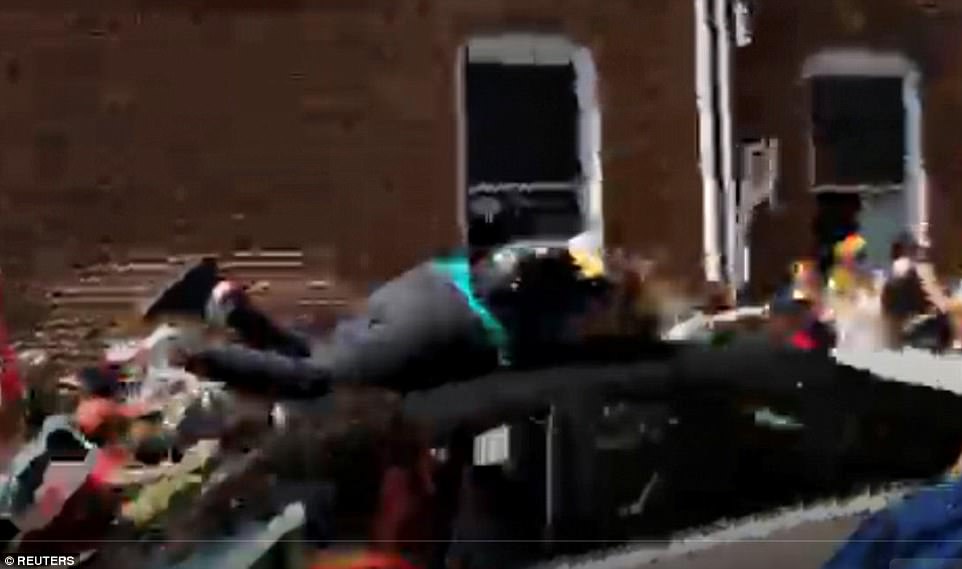 A witness claimed the act was intentional. He said : 'Yeah, it was intentional.About 40 miles an hour, hit about 15-20 people, crashed into the two cars in front of it, and then backed up and sped away while cops were standing on the side of the road and didn't do anything' 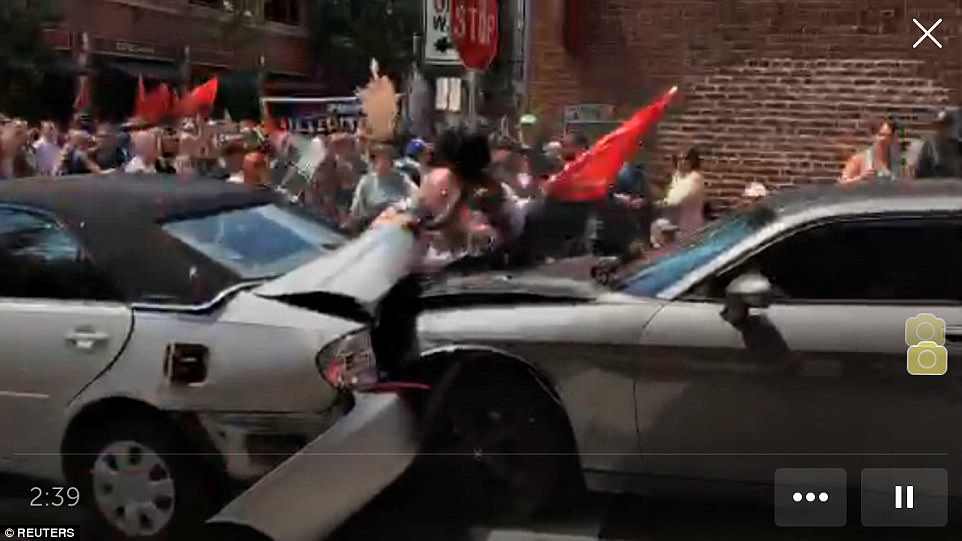 The wheel on the car appears to be bent to the left. I'd say that vehicle was no longer driveable. 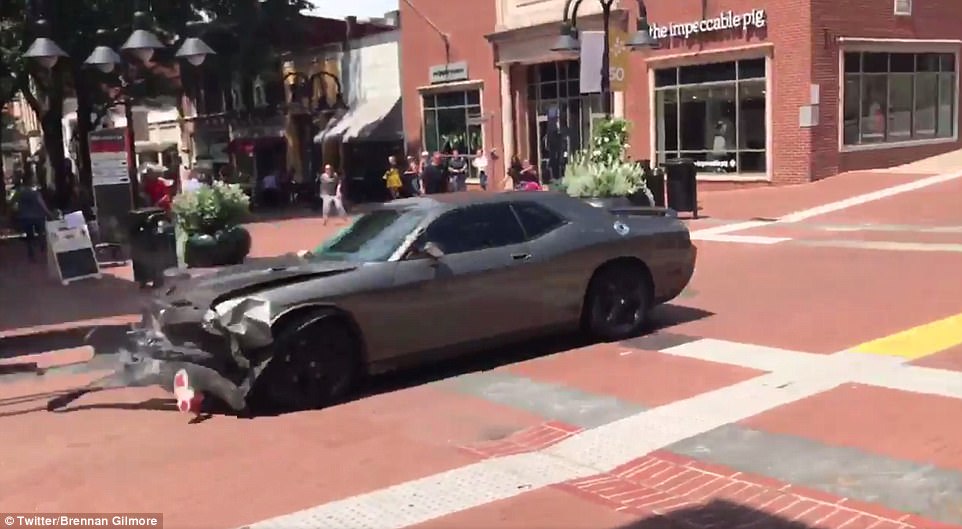 The shoe stuck to the bumper appears to be a prop to me. It's the one from the actor tossed over the car above. 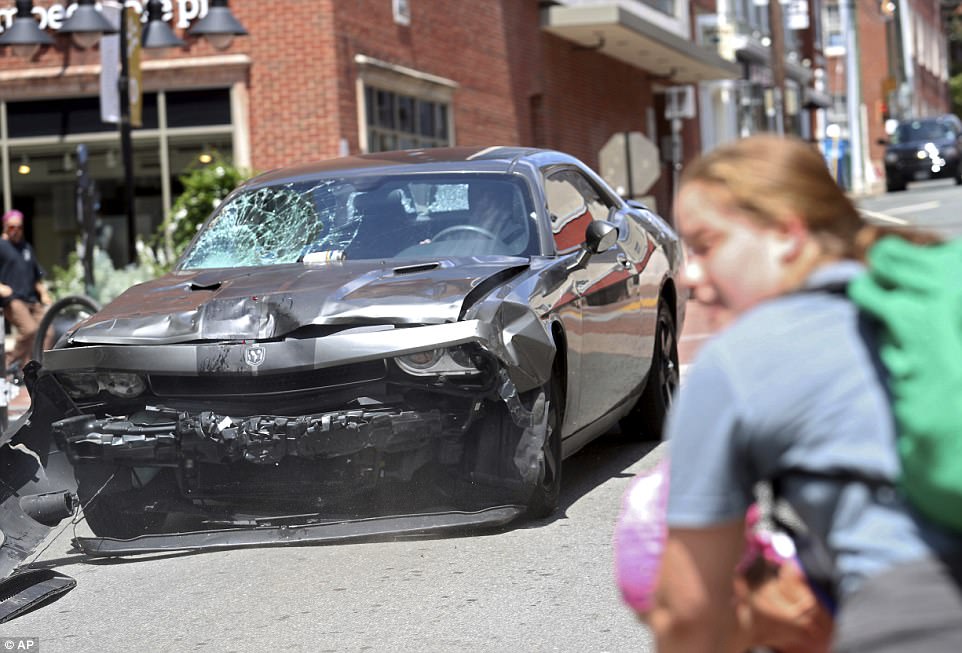 The street cleared rather quickly. 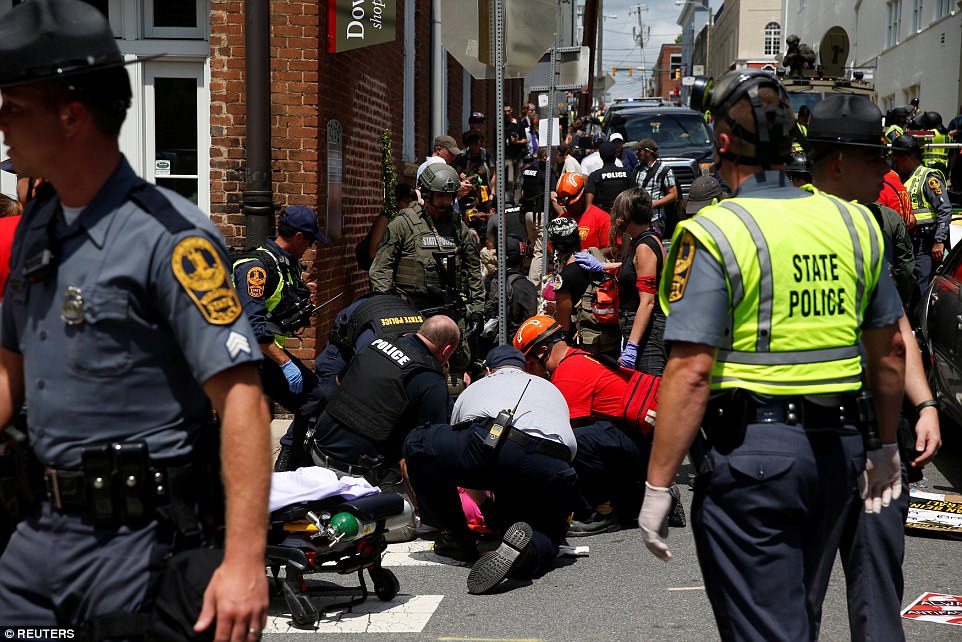 People were heard screaming and crying in the aftermath of the smash, as blood was splattered on a car's windshield and victims were desperately calling out for medical help 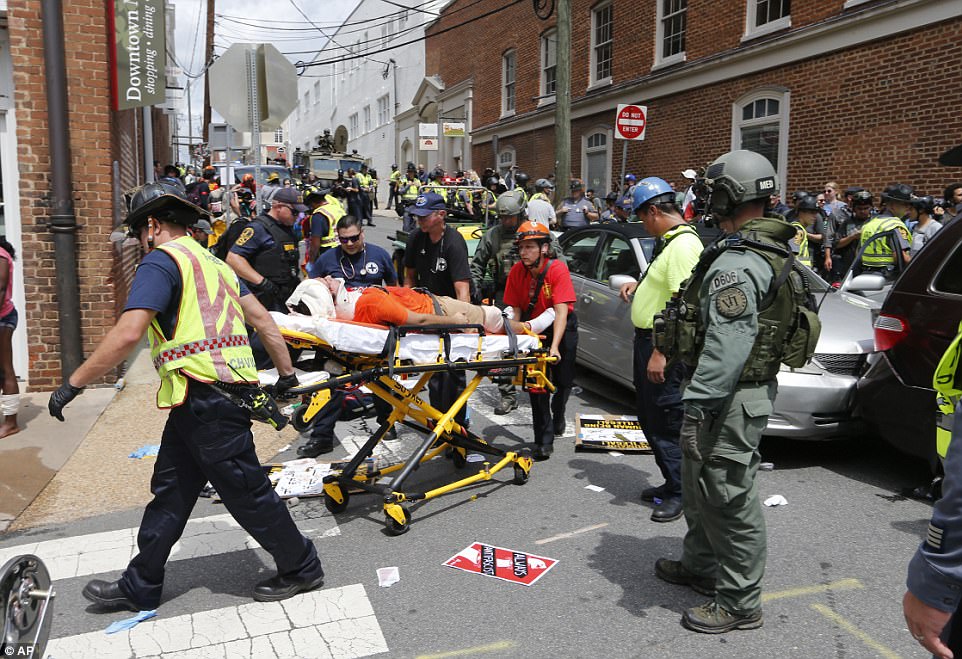 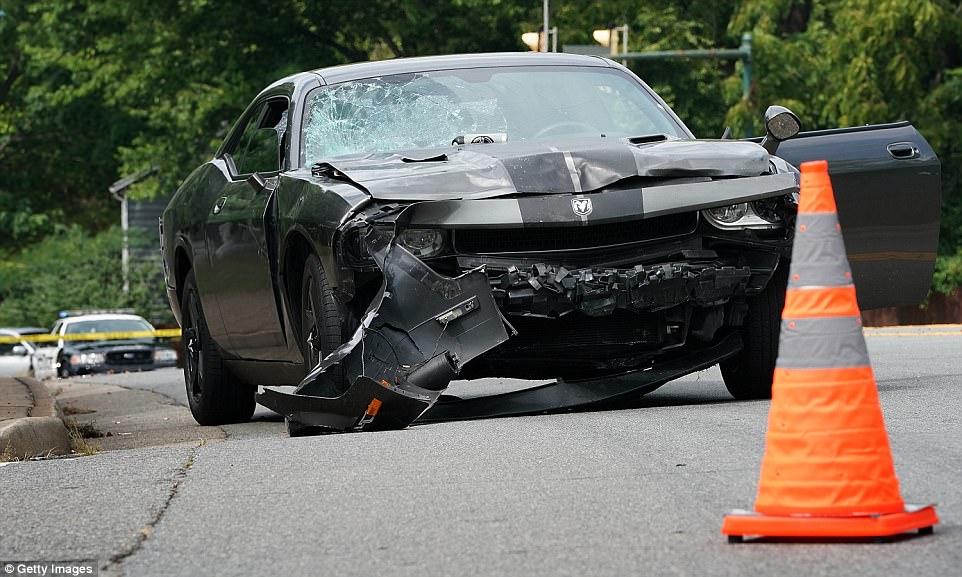 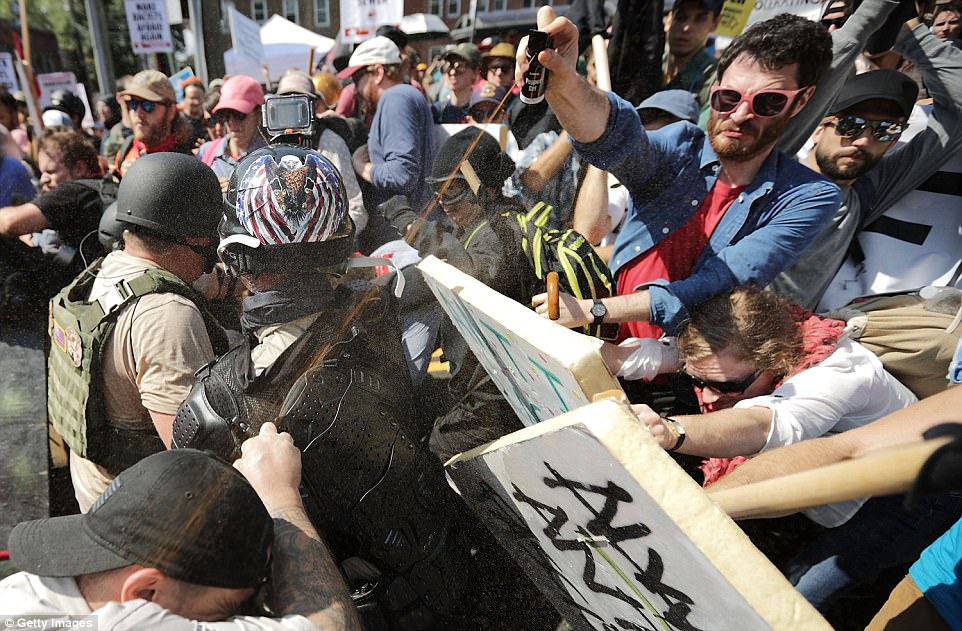 Where have all the buildings gone? Now we are in a rural setting. There is a shot above with the bumper completely off. How did it get to another location? How did the wheel straighten itself out? I guess the shoe gave it a kick. I see enough evidence of a manipulated staged event here to call it a fake. Don't get fussed enough to react to it. Buy a stars and bars flag or a statue of General Lee, open up some Southern Comfort and have a good laugh at the crisis actors screwing up the set again. So as they sang in the day look away when they try to manipulate a race war in the United States. It's most likely a deep state trick.

Freedom of speech and assembly means just that. If you don't like it, it doesn't mean you get violent and start street battles. After one protest or assembly another can take place. There is no right side in this. Both sides used the same tactics. If there is anyone to blame it isn't the president. I'd say it's the media for inflaming the situation for partisan political purposes. That's never a responsibility they'd ever admit to. We all have very divergent opinions embedded in our minds by the propaganda we were exposed to. It has taken over our minds and become our thought rationale. However, there are errors in all of them yet we fight over it.

The statue is a representative of living history that will never change and should be meant to educate us. However, our schools are left wing indoctrination centers and large segments of the population are fed up with that. They feel disenfranchised because their right to an opinion is being repressed. They went on a torch march. So what? The next day the pigeons might stain the monument and settle the matter for the left.

Violence begets violence. Unrestrained the ultimate lesson of the civil war might have to be learned again. After we have slain millions of our brothers, we may have even forgot why we fought in the first place and feel a national pain that will take many generations to heal again.

The north and the south found a way to live in harmony after that brutal war. They built statues as opposed to digging graves. It was a reasonable compromise then. It should be now as well. In conflict Satan grows wings. In peace and true tolerance his wings fall off. It is the better thing.

Enjoy the statue or walk by it. It is your choice. Destroy the statue and destroy your future of peace. Art is what it was. Art is therapy from a terrible war. Destroying it opens the festering wound to consume us again, but of course the media won't say that. They make money fanning the flames of intolerance for profit. You pay the piper by supporting it.

For those unfamiliar with Gone with the Wind the dear is Charlotte. Don't you give a damn about it either.