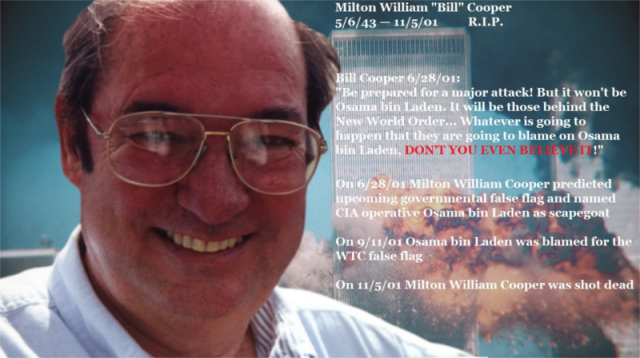 The unclassified documentspaint Cooper’s controversial actions as “hosting a talk show by means of short-wave radio,” as well as “frequently condemning the federal government, Justice Department and the FBI for the ‘atrocities’ at Waco and Ruby Ridge”. The records punctuate the point that Bill was, “convinced there is a government sponsored socialist conspiracy to establish a ‘new world order’” multiple times throughout the FBI’s investigations.

Cooper, best known for his underground best seller, “Behold a Pale Horse”, caught the FBI’s attention in 1997 over controversial allegations surrounding the Oklahoma City (OKC) bombing and Timothy McVeigh, the FOIA shows. In his broadcast, Hour of the Time, he often called the tragic incident a false flag attack by criminal elements of our government.

Shortly after the bombing of the Alfred P. Murrah federal building, Rush Limbaugh read a White House memo on the air during his broadcast which named William Cooper, “…the most dangerous radio host in America”.

This contributed to Cooper believing that he was personally targeted by President Bill Clinton and the IRS for tax evasion. He often addressed his concerns over his daily broadcast, Hour of the Time, and Project VERITAS publications.

An unnamed Deputy Marshall had attempted to serve Cooper with a summons on 06/19/1998, but Cooper threw the Deputy Marshal off his property without receiving the summons. Eventually, a bench warrant for his arrest was issued for not appearing in court on a summons which was NEVER served, leading to an intense surveillance operation and a barrage of informants that would help push Cooper into constant paranoia.

The intense FBI surveillance of Cooper’s household included multiple FBI meetings, undercover agents posing as journalists, monitoring of his internet publishing, as well as testimonies from personal acquaintances and local store owners. Aerial photos were taken of his ranch.

Apache County Sheriff Arthur Lee was concerned that federal agents were preparing for a siege on Cooper’s home in order to bring him in. When asked if Lee thought Cooper represented a threat to the community, the sheriff responded that he believed, “Cooper could live in that community for the next 50 years and never receive a traffic ticket”. He went on to tell the FBI he does not want a Ruby Ridge Scenario to develop in his county.

After an anonymous tip came into local law enforcement which claimed Cooper chased two individuals off of nearby property using a firearm, they decided to take action and raid Cooper’s home in plain clothes, leading to his controversial death.

Ultimately there would be no federal prosecution. The FBI closed their investigation after Milton William Cooper’s death during the resulting shootout with Apache County Sheriff’s Deputies.

As an old colleague said to me years ago, just because everybody is out to get you doesn't mean your paranoid. I had a file generated for asking a question about the possible theft of the gun registry money in a letter to the Minister of Justice in my allegedly free and democratic country. A criminal cabal runs most nations and agencies. That is a given really. What happened to William Cooper proves it.