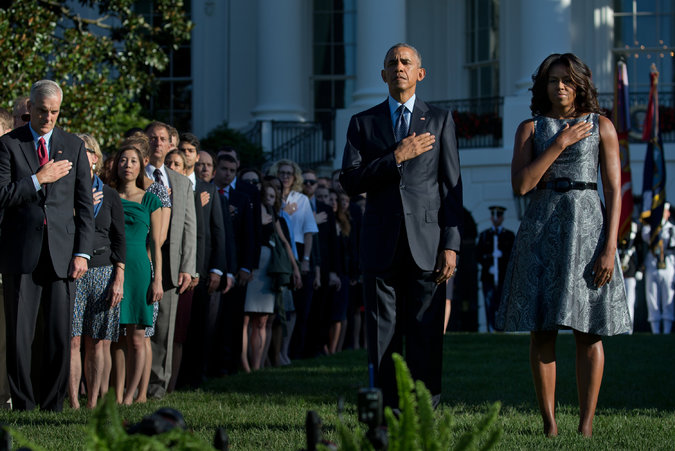 President Obama at a Sept. 11 ceremony in 2015. The Obama administration argues that the bill would put Americans at legal risk overseas.

WASHINGTON — Saudi Arabia has told the Obama administration and members of Congress that it will sell off hundreds of billions of dollars’ worth of American assets held by the kingdom if Congress passes a bill that would allow the Saudi government to be held responsible in American courts for any role in the Sept. 11, 2001, attacks.

The Obama administration has lobbied Congress to block the bill’s passage, according to administration officials and congressional aides from both parties, and the Saudi threats have been the subject of intense discussions in recent weeks between lawmakers and officials from the State Department and the Pentagon. The officials have warned senators of diplomatic and economic fallout from the legislation.

Adel al-Jubeir, the Saudi foreign minister, delivered the kingdom’s message personally last month during a trip to Washington, telling lawmakers that Saudi Arabia would be forced to sell up to $750 billion in treasury securities and other assets in the United States before they could be in danger of being frozen by American courts.

Several outside economists are skeptical that the Saudis will follow through, saying that such a sell-off would be difficult to execute and would end up crippling the kingdom’s economy. But the threat is another sign of the escalating tensions between Saudi Arabia and the United States.

The administration, which argues that the legislation would put Americans at legal risk overseas, has been lobbying so intently against the bill that some lawmakers and families of Sept. 11 victims are infuriated. In their view, the Obama administration has consistently sided with the kingdom and has thwarted their efforts to learn what they believe to be the truth about the role some Saudi officials played in the terrorist plot.

“It’s stunning to think that our government would back the Saudis over its own citizens,” said Mindy Kleinberg, whose husband died in the World Trade Center on Sept. 11 and who is part of a group of victims’ family members pushing for the legislation.

President Obama will arrive in Riyadh on Wednesday for meetings with King Salman and other Saudi officials. It is unclear whether the dispute over the Sept. 11 legislation will be on the agenda for the talks.

A spokesman for the Saudi Embassy did not respond to a message seeking comment.

Saudi officials have long denied that the kingdom had any role in the Sept. 11 plot, and the 9/11 Commission found “no evidence that the Saudi government as an institution or senior Saudi officials individually funded the organization.” But critics have noted that the commission’s narrow wording left open the possibility that less senior officials or parts of the Saudi government could have played a role. Suspicions have lingered, partly because of the conclusions of a 2002 congressional inquiry into the attacks that cited some evidence that Saudi officials living in the United States at the time had a hand in the plot.

Those conclusions, contained in 28 pages of the report, still have not been released publicly.

The dispute comes as bipartisan criticism is growing in Congress about Washington’s alliance with Saudi Arabia, for decades a crucial American ally in the Middle East and half of a partnership that once received little scrutiny from lawmakers. Last week, two senators introduced a resolution that would put restrictions on American arms sales to Saudi Arabia, which have expanded during the Obama administration.

Families of the Sept. 11 victims have used the courts to try to hold members of the Saudi royal family, Saudi banks and charities liable because of what the plaintiffs charged was Saudi financial support for terrorism. These efforts have largely been stymied, in part because of a 1976 law that gives foreign nations some immunity from lawsuits in American courts.

The Senate bill is intended to make clear that the immunity given to foreign nations under the law should not apply in cases where nations are found culpable for terrorist attacks that kill Americans on United States soil. If the bill were to pass both houses of Congress and be signed by the president, it could clear a path for the role of the Saudi government to be examined in the Sept. 11 lawsuits.

Obama administration officials counter that weakening the sovereign immunity provisions would put the American government, along with its citizens and corporations, in legal risk abroad because other nations might retaliate with their own legislation. Secretary of State John Kerry told a Senate panel in February that the bill, in its current form, would “expose the United States of America to lawsuits and take away our sovereign immunity and create a terrible precedent.”

The bill’s sponsors have said that the legislation is purposely drawn very narrowly — involving only attacks on American soil — to reduce the prospect that other nations might try to fight back.

In a closed-door briefing on Capitol Hill on March 4, Anne W. Patterson, an assistant secretary of state, and Andrew Exum, a top Pentagon official on Middle East policy, told staff members of the Senate Armed Services Committee that American troops and civilians could be in legal jeopardy if other nations decide to retaliate and strip Americans of immunity abroad. They also discussed the Saudi threats specifically, laying out the impacts if Saudi Arabia made good on its economic threats.

John Kirby, a State Department spokesman, said in a statement that the administration stands by the victims of terrorism, “especially those who suffered and sacrificed so much on 9/11.”

Edwin M. Truman, a fellow at the Peterson Institute for International Economics, said he thought the Saudis were most likely making an “empty threat.” Selling hundreds of billions of dollars in American assets would not only be technically difficult to pull off, he said, but would also very likely cause global market turmoil for which the Saudis would be blamed.

Moreover, he said, it could destabilize the American dollar — the currency to which the Saudi riyal is pegged.

“The only way they could punish us is by punishing themselves,” Mr. Truman said.

The bill is an anomaly in a Congress fractured by bitter partisanship, especially during an election year. It is sponsored by Senator John Cornyn, Republican of Texas, and Senator Chuck Schumer, Democrat of New York. It has the support of an unlikely coalition of liberal and conservative senators, including Al Franken, Democrat of Minnesota, and Ted Cruz, Republican of Texas. It passed through the Judiciary Committee in January without dissent.

“As our nation confronts new and expanding terror networks that are targeting our citizens, stopping the funding source for terrorists becomes even more important,” Mr. Cornyn said last month.

The alliance with Saudi Arabia has frayed in recent years as the White House has tried to thaw ties with Iran — Saudi Arabia’s bitter enemy— in the midst of recriminations between American and Saudi officials about the role that both countries should play in the stability of the Middle East.

But the administration has supported Saudi Arabia on other fronts, including providing the country with targeting intelligence and logistical support for its war in Yemen. The Saudi military is flying jets and dropping bombs it bought from the United States — part of the billions of dollars in arms deals that have been negotiated with Saudi Arabia and other Persian Gulf nations during the Obama administration.

The war has been a humanitarian disaster and fueled a resurgence of Al Qaeda in Yemen, leading to the resolution in Congress to put new restrictions on arms deals to the kingdom. Senator Christopher S. Murphy, Democrat of Connecticut, one of the resolution’s sponsors and a member of the Senate Foreign Relations Committee, said that Congress has been “feckless” in conducting oversight of arms sales, especially those destined for Saudi Arabia.

“My first desire is for our relationship with Saudi Arabia to come with a greater degree of conditionality than it currently does,” he said.