The planets are about to align 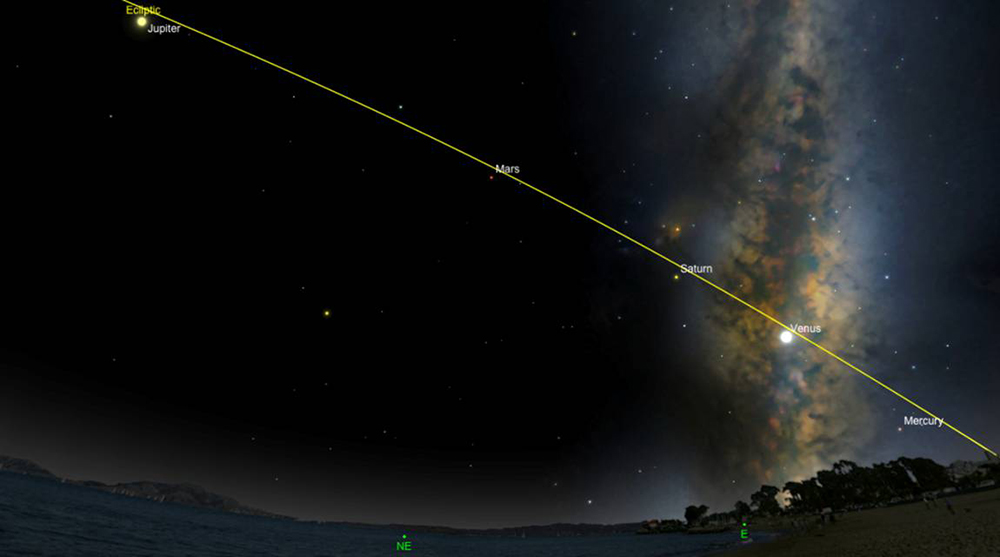 On 20 January, all five bright planets – Mercury, Venus, Mars, Jupiter and Saturn – will appear in a line, visible to the naked eye.

FROM 20 JANUARY to 20 February, all five visible planets will sit in a line from the horizon to the moon - for the first time since 2005.

Dr Alan Duffy, research fellow at Swinburne University in Melbourne, said that this reasonably rare alignment is “essentially a quirk” of the universe. All the planets sit on a flat plane but have different yearly cycles – so for all five visible planets to happen to line up is “something well worth seeing,” he said.

According to Dr Tanya Hill, senior curator at the Melbourne Planetarium, there will be another chance to view the planets lined up in August, but then not again until October 2018.

Photography from the final frontier

What colour is the moon?

What to look out for

From Wednesday 20 January, star gazers will have a 5.30am-5.40am AEDT (Australian Eastern Daylight Time) window to get the best view of the alignment.

Venus and Jupiter will be easiest to see and Mars, while a little harder, will have a distinctive red glow to look out for.

“The big challenge will be Mercury,” said Alan. Because Mercury is so close to the horizon, there is only a small time period when it has appeared before the sun comes up. Tall buildings and trees could also block your view of the final planet.

Alan’s advice is to find as clear a horizon as possible and, most importantly, a dark sky. While it isn’t impossible in the city, light pollution and sky scrapers will make the viewing much harder.

The alignment will be visible from 20 January until 20 Feburary and Alan suggests to go out on more than one day to watch the event if you don’t quite catch it the first time.

“There are only a few amazing things in the night sky that can be seen without any equipment,” Alan said, adding that it is worth the early morning rise.

Hold your arm up in a straight line from the horizon to the moon and the planets should fall along that line.

Try to find a flat horizon and a dark sky.

Don’t give up! It may take more than one early morning to see the full alignment.

Alan said Northern Hemisphere planet-gazers should look towards the south anytime before sunrise (by about 6.30am at the latest in New York, for example). "From where the Sun will soon be rising in the east all the way to the other side in the west you’ll see the five planets stretched out above you in the sky," he said.