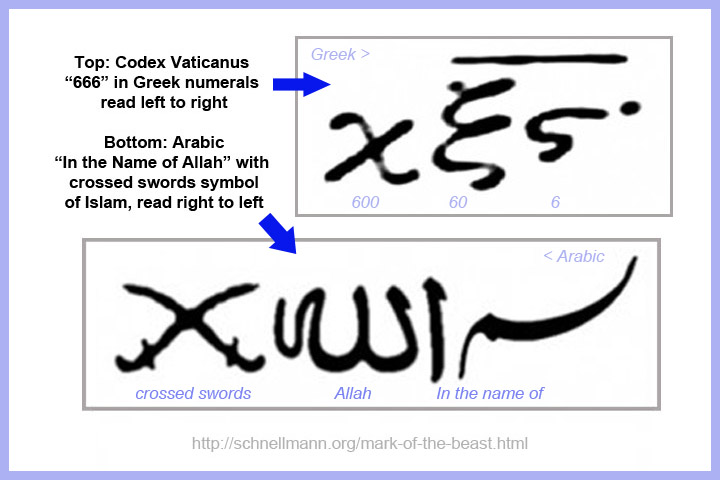 Everyone in the west who have tried to figure out the name of the anti-Christ over the years, saying that people like Ronald Reagan or Henry Kissinger or Richard Nixon or Bill Clinton or even now Barack Obama is the anti-Christ have all been wrong. Ridiculous assumptions at the very least. Why? Because they use English Gematria, which is the assignment of numbers. (There are seven basic types of Gematria) to try to calculate the name, using a number assigned for each letter of the alphabet. Secondly, the West does not understand it’s not about them and never has been, it’s about the Middle East.

Let’s take a look at Revelation 13:18. “Here is wisdom. Let him who has understanding calculate the number of the beast, for the number is that of a man; and his number is six hundred and sixty-six.” The new Testament was translated from Hebrew (John’s language) into Greek and then into English. Studying the manuscript evidence, in the “Codex Vaticanus” dated 350 AD those three letters (that were translated 666) are not Greek in that sentence, but were translated that way wrongly. They are actually Arabic letters. John wrote what he saw the bible says, so when it came to 666, it was not Greek text. Even in the original manuscript in Greek when you turn the three letters, they become and look exactly like the Arabic letters. What it means is Bis’m Allah or “In the Name of Allah! That is the very thing that all the Islamic warriors wear on the headbands and armbands on their right arm!

These three letters carry secondary meanings, but not a primary meaning! Remember it’s his number, his name, NOT ours. It has nothing to do with an implant or UPC code or pin number nor nano power or technology at all. It’s the creed of Islam! Let’s break it down further. In verse 18 the word for wisdom is Sophia=meaning broad and full intelligence. The word count means=reckon, decide by voting. The word number (mentioned three times) means=a definite number OR an indefinite number, a multitude!

Walid Shoebat, a Muslim born in Bethlehem, and a former terrorist bomber and hater of Jews and Christians, came to know the Messiah Jesus himself and has now appeared on many radio and TV programs witnessing about his born again experience. He states at the time of his conversion to Christianity, he was a member of a group who were in the planning stages of jihid upon America. He goes on to say “there is no such thing as a peace loving Muslim Brotherhood.” He goes on to say the West is fooled by the word democracy in uprising Muslim nations. They will vote once and then democracy is over. He states the Islamic Messiah, called the Mahdi, is the mirror image of the anti-Christ!

Every nation Messiah (Jesus) fights in the bible is Muslim. Not European or American or Canadian or South American, but Muslim. Revelation 13:17, 18 and that 666 number is the number of his name. It not a literal name, it has nothing to do with a literal western name! It is the Islamic creed “I declare there is no god but Allah and Mohammad is his messenger.” The mark of the beast is The Creed! So this is how it should really read translated correctly: “Here is wisdom, Let him that hath understanding decide [who] the multitude of the beast [is]; for it is the multitude of a man [that is, Muhammad]; and his multitude are “in the name of Allah.”

Swearing allegiance or identifying yourself to this coming leader who’s symbolism is of the anti-Christ aligning with 666 is the REAL Unforgivable Sin and and all who do this will forgo any chance of salvation or being saved according to Revelation 14:9,10,11! And this coming leader will definitely be Muslim. Yes, that’s right, the anti-Christ will be Muslim and will come from the Middle East, not the Revived Roman Empire as many teach. He will come from TURKEY, where the bible says the throne of Satan sits upon the earth.

Zechariah 11 describes the only physical description of the anti-Christ in the bible. Verse 17 says “a sword shall be against his arm And against his right eye; His arm shall completely wither, And his right eye shall be totally blinded.” Perhaps this is caused by the wound he will suffer; however all Islamics wear a headband and a ban on their right arm and it says “in the name of Allah.” That’s the same Islamic version of the anti-Christ and is call the Dajjal who is suppose to be one eyed or blind in one eye according to their culture of Islam. They even have a web site called the Dajall new network. Coincidence? I don’t think so, do you?

There are 99 names of Allah(Asmaa-ul-Husnaa). One is Khayrul-Makereen which in English translates as “The greatest of all deceivers.”Allah is the not the God of the old Testament. The god of Islam can do anything good or anything bad and translates to be a specific god, not the God of creation. Abu-Bakr, the first Caliph to succeed Muhammad declared “The only sure way in Islam of achieving Paradise is to sacrifice one’s life in jihad. These blinded Islamic men of Satan carry out his plan of murder and death. Abu went on to say to sacrifice one’s life in killing infidels carries its highest reward. This demonic doctrine is taught from childhood. There are more than 100 verses in the Quran where the Qur’an advocates the use of violence to spread Islam.

Ayatollah Khomeini of Iran declared “the purest joy in Islam is to kill and be killed for Allah.” Islam is evil, demonic and the devil is leading millions right into hell with this doctrine of hate and murder. In the Qur’an, Allah commands Muslims “Take not the Jews and the Christians as friends….Slay the idolaters [all non-Muslims] wherever you find them.” This is a religion of hate, not love, a religion of murder, not life.

The six lies of Islam are: That Allah is the same God as the God of the Bible (a lie). That Islam is a religion of love (a lie), that Islam is a religion of peace (a lie), that the Qur’an is a holy book (a lie), and that they accept Jesus as a Prophet (a lie). These are all lies and myths using propaganda to fool others in the West. Make no mistake, Islam is not just a religion: it is a complete, total system of life. Islam has a system that is –religious, that is – legal, that is –political, that is – economic, that is – social and that has military components.

And by the way, he is NOT going to control the entire world. No one has in history and no one ever will except the King of King and Lord of Lord’s, the Messiah Jesus Christ and He will do it in His Millennium reign! In several places in the bible it says the anti-christ will fight other nations and war with them. He gets disturbed by rumors coming out of the East and North and goes out to wage war with them. What He will control is the Middle East nations surrounding Israel and pockets of Islamic Muslims living in other countries around the world. Daniel 11 states the anti-Christ will declare war on the strongest of all fortresses, so that means he is not the strongest military might. It could be America or China or Russia or Britain. And it will be one or all of these countries along with Israel that will destroy the anti-Christ Islamic armies and defeat him with a command of Messiah Jesus. His destruction is found in Ezekiel 28. There it says God will raise up seven nations against him and destroy him. Micah 5 says there are seven shepherds and eight principle men(nations) who are good leaders who will stand with God against the seven horns (nations) of Satan. No one knows for sure who these nations are at this time.

Make no mistake about it; Islam is the anti-Christ spirit full of hatred and demonically inspired. Even the poor Muslims who are under death threat if they leave Islam for Christianity have no idea of the true roots of Islam and the demonic power behind it or they would leave it by the millions.

In Isaiah 14 Lucifer falls from heaven. The word Lucifer in Hebrew is “Hilal-bin-Sahar which in context reads brightness in Arabic and means Crescent Moon, son of the morning star-THE VERY SIGN OF ISLAM! Worship of Al-llah, the Moon god is where Islam originated, NOT with Muhammad! And Muhammud was born into this idol worship society who had over 360 idols of alKa’aba and they were openly Occult!

The anti-Christ is definitely a Muslim. Violence is commanded in the Koran, Sura 9:5 “ Fight and slay the pagans(infidels where he find them, and seize them, beleaguer them, and lie in wait for them in every stratagem of war.” And in Sura 5:33 “Their punishment is …execution, or crucifixion, or the cutting off of hands and feet from the opposite sides or exile from the land.”

Sadly, Muslims are under a penalty of death to leave Islam. The God of the Bible, the God of Abraham, Isaac and Jacob loves the Muslim people and sent Messiah Jesus to die for them too. We must pray for all the former Muslims who are now born again in Messiah Jesus and pray for their safety and care. We must love them and hate Islam and be aware of the religion of Satan and its conquest agenda for the world. They won’t win as Messiah Jesus will crush the head of Satan and this religion at His second coming. But know that perilous times will come and on the way and in some areas has already started. The One World Order will still be set up and terrible times will come unless the people of all nations repent and return to God with all their hearts. Are you one that needs to come back to God or receive Messiah Jesus for the first time? Just ask Him to forgive you and come into your life and confess out loud Jesus is Lord. Jesus is coming back soon, be ready, be strong, have courage, keep your faith in Him at all costs….. And as always, study for yourself and check out everything and see if what I am saying is true. May the Lord bless you and keep you….Remember to pray for the peace of Jerusalem and Israel and for your country and its leaders.

It has been my understanding that a radical form of Islam known as ISIS is the army of the anti-Christ. They fit the profile of what would be necessary to advance that agenda with force. In the classic good cop bad cop strategy they are the bad cop of course. The good cops are those who facilitate their infiltration in body (refugees), mind (accepting alternative doctrines) and spirit (the ET light being phenomenon). The Mark of the Beast

16 And he causes all, the small and the great, and the rich and the poor, and the free men and the slaves, to be given a mark on their right hand or on their forehead, 17 and he provides that no one will be able to buy or to sell, except the one who has the mark, either the name of the beast or the number of his name. 18Here is wisdom. Let him who has understanding calculate the number of the beast, for the number is that of a man; and his number is six hundred and sixty-six.