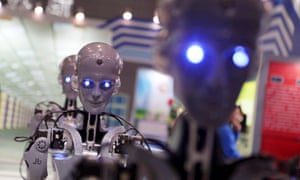 If you wanted relief from stories about tyre factories and steel plants closing, you could try relaxing with a new 300-page report from Bank of America Merrill Lynch which looks at the likely effects of a robot revolution.

But you might not end up reassured. Though it promises robot carers for an ageing population, it also forecasts huge numbers of jobs being wiped out: up to 35% of all workers in the UK and 47% of those in the US, including white-collar jobs, seeing their livelihoods taken away by machines.

Haven’t we heard all this before, though? From the luddites of the 19th century to print unions protesting in the 1980s about computers, there have always been people fearful about the march of mechanisation. And yet we keep on creating new job categories.

However, there are still concerns that the combination of artificial intelligence (AI) – which is able to make logical inferences about its surroundings and experience – married to ever-improving robotics, will wipe away entire swaths of work and radically reshape society.

“The poster child for automation is agriculture,” says Calum Chace, author ofSurviving AI and the novel Pandora’s Brain. “In 1900, 40% of the US labour force worked in agriculture. By 1960, the figure was a few per cent. And yet people had jobs; the nature of the jobs had changed.

“But then again, there were 21 million horses in the US in 1900. By 1960, there were just three million. The difference was that humans have cognitive skills – we could learn to do new things. But that might not always be the case as machines get smarter and smarter.”

What if we’re the horses to AI’s humans? To those who don’t watch the industry closely, it’s hard to see how quickly the combination of robotics and artificial intelligence is advancing. Last week a team from the Massachusetts Institute of Technology released a video showing a tiny drone flying through a lightly forested area at 30mph, avoiding the trees – all without a pilot, using only its onboard processors. Of course it can outrun a human-piloted one.

MIT has also built a “robot cheetah” which can jump over obstacles of up to 40cm without help. Add to that the standard progress of computing, where processing power doubles roughly every 18 months (or, equally, prices for capability halve), and you can see why people like Chace are getting worried.

But the incursion of AI into our daily life won’t begin with robot cheetahs. In fact, it began long ago; the edge is thin, but the wedge is long. Cooking systems with vision processors can decide whether burgers are properly cooked. Restaurants can give customers access to tablets with the menu and let people choose without needing service staff.

Further afield, Foxconn, the Taiwanese company which assembles devices for Apple and others, aims to replace much of its workforce with automated systems. The AP news agency gets news stories written automatically about sports and business by a system developed by Automated Insights. The longer you look, the more you find computers displacing simple work. And the harder it becomes to find jobs for everyone.Lawyers who used to slog through giant files for the “discovery” phase of a trial can turn it over to a computer.An “intelligent assistant” called Amy will, via email, set up meetings autonomously. Google announced last week that you can get Gmail to write appropriate responses to incoming emails. (You still have to act on your responses, of course.)

So how much impact will robotics and AI have on jobs, and on society? Carl Benedikt Frey, who with Michael Osborne in 2013 published the seminal paper The Future of Employment: How Susceptible Are Jobs to Computerisation? – on which the BoA report draws heavily – says that he doesn’t like to be labelled a “doomsday predictor”.

He points out that even while some jobs are replaced, new ones spring up that focus more on services and interaction with and between people. “The fastest-growing occupations in the past five years are all related to services,” he tells the Observer. “The two biggest are Zumba instructor and personal trainer.”

Frey observes that technology is leading to a rarification of leading-edge employment, where fewer and fewer people have the necessary skills to work in the frontline of its advances. “In the 1980s, 8.2% of the US workforce were employed in new technologies introduced in that decade,” he notes. “By the 1990s, it was 4.2%. For the 2000s, our estimate is that it’s just 0.5%. That tells me that, on the one hand, the potential for automation is expanding – but also that technology doesn’t create that many new jobs now compared to the past.”

“I think our best hope going forward is figuring out how to live in an economy of radical abundance, where machines do all the work, and we basically play.”This worries Chace. “There will be people who own the AI, and therefore own everything else,” he says. “Which means homo sapiens will be split into a handful of ‘gods’, and then the rest of us.

Arguably, we might be part of the way there already; is a dance fitness programme like Zumba anything more than adult play? But, as Chace says, a workless lifestyle also means “you have to think about a universal income” – a basic, unconditional level of state support.

Perhaps the biggest problem is that there has been so little examination of the social effects of AI. Frey and Osborne are contributing to Oxford University’s programme on the future impacts of technology; at Cambridge, Observer columnist John Naughton and David Runciman are leading a project to map the social impacts of such change. But technology moves fast; it’s hard enough figuring out what happened in the past, let alone what the future will bring.

But some jobs probably won’t be vulnerable. Does Frey, now 31, think that he will still have a job in 20 years’ time? There’s a brief laugh. “Yes.” Academia, at least, looks safe for now – at least in the view of the academics. 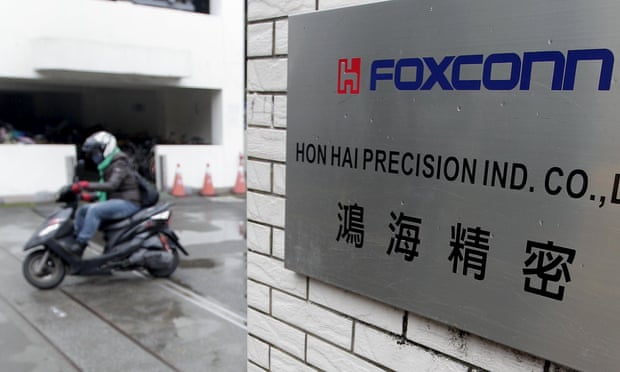 Smartphone manufacturer Foxconn is aiming to automate much of its production facility. Photograph: Pichi Chuang/Reuters

The danger of change is not destitution, but inequality

Productivity is the secret ingredient in economic growth. In the late 18th century, the cleric and scholar Thomas Malthus notoriously predicted that a rapidly rising human population would result in misery and starvation.

But Malthus failed to anticipate the drastic technological changes - from the steam-powered loom to the combine harvester - that would allow the production of food and the other necessities of life to expand even more rapidly than the number of hungry mouths. The key to economic progress is this ability to do more with the same investment of capital and labour.

The latest round of rapid innovation, driven by the advance of robots and AI, is likely to power continued improvements.

Recent research led by Guy Michaels at the London School of Economics looked at detailed data across 14 industries and 17 countries over more than a decade, and found that the adoption of robots boosted productivity and wages without significantly undermining jobs.

Robotisation has reduced the number of working hours needed to make things; but at the same time as workers have been laid off from production lines, new jobs have been created elsewhere, many of them more creative and less dirty. So far, fears of mass layoffs as the machines take over have proven almost as unfounded as those that have always accompanied other great technological leaps forward.

There is an important caveat to this reassuring picture, however. The relatively low-skilled factory workers who have been displaced by robots are rarely the same people who land up as app developers or analysts, and technological progress is already being blamed for exacerbating inequality, a trend Bank of America Merrill Lynch believes may continue in future.

So the rise of the machines may generate huge economic benefits; but unless it is carefully managed, those gains may be captured by shareholders and highly educated knowledge workers, exacerbating inequality and leaving some groups out in the cold. Heather Stewart