HURRICANE PATRICIA: THEY FAKED IT?

They made it perfectly clear that they got video from the worst hit areas. I was taking pictures of the TV and the camera batteries died so I only got a few photos. Here is what it was like:

The first photo to the left here, which was a "worst case scenario" in the "peak damage zone" shown right at the beginning of the broadcast proves that the worst of the worst of the worst shoddy structures survived this "hurricane". Mexico is built out of brick. I don't know how they came up with a photo of something like that, I have never seen anything that poor in Mexico. I guess this is what they mean when they said it hit a "remote village". And it strips the lies bare - THAT shack could not possibly survive even a real category 1.

In subsequent scenes (after the batteries died) there were thatch roof beach huts many people have seen (the type where palm fronds make the roof) and they stand on tall poles and are totally open underneath. They showed one in the primary damage zone, right on the beach, and the roof was missing approximately 2 square feet of fronds but it was still standing straight, and beside it was a really crappy 2x4 framed beach hut with tarps for the roof. The tarps were torn somewhat, but were mostly still in place.

This second photo to the left here shows more obviously weak structures that got through the hurricane just fine, in the worst damage zone. Note how all the palm trees in the background are still there, right in the middle of the worst damage zone, where even a direct hit from a category 2 would have ripped them clean out. Yet these were presented as an example of "how bad it was".

They showed a shoreline resort that suffered a collapsed seawall, and had significant damage to wooden vendor shelters by the seawall. All were standing. That was the worst damage they showed. The only roofs that failed were thatch roofs or tin roofs. Almost all trees were still standing, right in the middle of the worst damage zone.

A gas station roof (the type that is over the pumps) was blown over. A large shipping vessel was pushed against the rocks, stranded.

This third photo here was the last thing the camera got when the batteries died. And these were sequential photos, I only got 3 photos before the batteries died, I did not cherry pick stupidity here. Look at that fine construction. DISASTER: The tin/palm frond/whatever roof blew off this first class construction. If this type of thing is all they have to show, this was a scam cane and that is all there is to it. Where are the shredded shopping malls? Where are the cars smashed to tin foil? where are the countless destroyed brick and concrete structures? If this hurricane could not even rip out Hondo's beer shack, it proves "climate change" fraud of the highest order.

VERDICT: The peak winds were no greater than 80 mph. And even that is a stretch, it probably was not even that high. Too many totally shoddy structures suffered too little damage for anything more. This was not a category 5 hurricane. It has been confirmed there were zero deaths. The damage was consistent with a sub hurricane tropical storm. They are trying to classify it as a category 7, all the while the only significant damage was to wooden thatch roof stick built shacks which had only the palm fronds blown out of the driftwood stick roofs, with food and glasses still on the tables inside, and a few brick structures that were damaged from trees falling on them. Patricia is a serious weather fraud.

NEVER FORGET: TWO DAYS BEFORE THIS FAKE HURRICANE, GAG ORDERS WERE PLACED ON ALL EMPLOYEES OF THE USGS AND OTHER WEATHER REPORTING AGENCIES, STATING THAT IF EMPLOYEES OF THESE AGENCIES SAID ANYTHING OTHER THAN THE OFFICIALLY RELEASED STORY FOR ANYTHING (in other words, if they blew the whistle) THEY WOULD BE PROSECUTED AND JAILED. This was flatly illegal action by the federal government, but it did happen, and NOW WE KNOW WHY.

"Hurricane" Patricia will now no doubt be used as a dreadful political weapon to take away rights and body slam a huge carbon tax on the world.

Category 5 Hurricane out of the news, because it DID NOT HAPPEN. There was not even a category 1 hurricane in Mexico ANYWHERE, and the lack of news proves it. Hurricanes cannot just hit an "unpopulated section of coastline" anywhere on earth, they are so huge that no matter what, there is notable damage from even a category 1 every time, no matter where it makes landfall. Scammers want you to believe Mexico is just a bunch of bush wackers totally out of touch with no roads to them and no way to get in to inspect damage. FOR THE RECORD: Mexico has a coastal highway and TOTAL ACCESS to all possible landfall zones for this hurricane. Lack of photos proves it did not happen.

Why would they fake a hurricane? Because even though this hurricane is certifiably fake, it will hit the record books as real so records kept by the U.S. will say there was a "category 6" to accomplish a political agenda. These fake records will now be used to push the climate change scam and they WILL affect policy that will have a major impact on the way the world handles energy.

They can't get their carbon tax and climate tyranny in place legitimately, and this hurricane proves that if they have to lie to get it, they will.

FOR THE RECORD: The pictures that were posted everywhere for this hurricane that showed it swallowing half of Mexico were FAKE. The Mexican TV showed a true time lapse of the real hurricane, which at it's peak had a tiny weak eye and clouds which barely extended inland a short distance. It then totally dissipated 100 miles out over the ocean and the so-called "hurricane" was nothing but a cloud bank when it hit shore. The mega cane pictures we all saw, pictures which even got published in a few Mexican papers were a hoax someone drafted on a computer. The real hurricane never looked like that, EVER.

If anything could give people ammo to question the legitimacy of American information gatekeepers such as the USGS and NOAA, this fake hurricane is it, anyone can drive down to that region of Mexico and call foul. Any category 5 hurricane of even a small size would have smashed both Manzanillo and Puerto Vallarta in one whack, hurricanes are not thunder heads or tiny little weather systems that can selectively target a small village and die when they hit a lonely mountain in the middle of nowhere with no consequence anywhere else. The stupidity of the scammers fronting this hurricane lie is beyond the casual and well into the realm of insult.

FOR THE RECORD, FINAL WORD: THIS HURRICANE HIT NEAR MANZANILLO, WHICH IS AN ABSOLUTELY GIANT PORT, THE ENTIRE PACIFIC INTAKE / OUTPUT FOR MEXICO. THIS PORT IS WELL CONNECTED, WITH ROADS GOING NORTH SOUTH AND EAST, TO CONNECT THIS PORT WITH THE REST OF MEXICO VIA TRUCKING. THERE WAS NO "REMOTE REGION" FOR THIS HURRICANE TO BASH INTO AND VANISH. God, the "remote stretch of shoreline village victim" lies are pathetic, a major road goes right up the coast with uber rich mansions and resorts dotting a huge portion of the coast between Manzanillo and Puerto Vallarta!

Don't bet on it. Here is what I think is far more probable:

There is war on the horizon. And any time there is a war, information control is key. The truth can kill a war in seconds flat. It is far more probable that America is fronting a line about Russia cutting cables, so that if America decides to pocket itself off from the rest of the world to control information and keep Americans in the war game, a few routers can be switched off and then called a "cable break" blamed on Russia. This would villainize Russia and keep Americans desirably in the dark in one whack, a win win for the war mongers.

I would not buy ANY line about "cables being cut", you know, at least China is honest and will state when they censor, why can't America be at least that?

This is an interesting submission to say the least. However, the 'damage' was consistent with the claim. 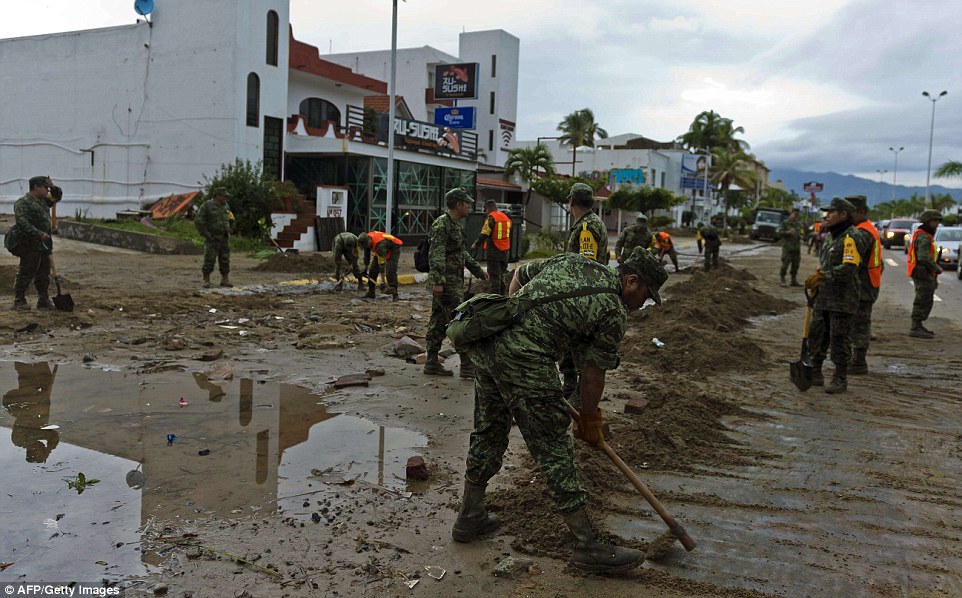 A force of tens of thousands was dispatched by the Mexican government to deal with the storm. Above, soldiers remove sand from the street in Manzanillo, a port just south of where Patricia made landfall

If submarine cables were the target, these are the potential targets.