Washington (CNN)Russian involvement in the 4½-year-old Syrian civil war seems to be escalating, with NATO's secretary general confirming Tuesday a second incursion by Russian planes into Turkish airspace and saying Russian ground troops were in Syria as well. 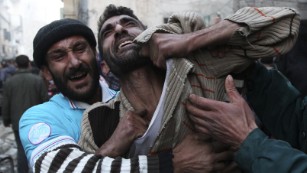 "It's unacceptable, it's dangerous, and it's reckless behavior and it adds to the tensions," Secretary General Jens Stoltenberg told CNN about the incursions into Turkish airspace.

"We see the violation of the Turkish airspace becomes more important, more dangerous, because it happens in a context where we see more fighting, more Russian military presence in Syria."

Stoltenberg expressed alarm over how the Russian military grows on several fronts in Syria.

"So we have seen a substantial military buildup by Russia in Syria, both in the air with the combat planes and air defense systems, but also an increasing number of ground troops," he said. "In addition to that, they have deployed naval assets, a large number of naval assets close to the Syrian shores. And they continue to do so."

The first violation of Turkey's airspace is reported to have happened Saturday. The second was Sunday, officials said.

Turkey's President Recep Tayyip Erdogan had a warning for Moscow, according to the nation's semiofficial news agency, Anadolu.

"If Russia loses a friend like Turkey, with which it has conducted many businesses, it will lose a lot," he said. 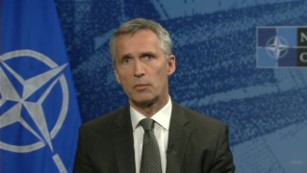 In addition to the incursion reports, the Turkish air force said a MiG-29 fighter jet of an unidentified nationality had interfered Monday with eight Turkish F-16s on the Turkey-Syria border. The Turkish air force reported the jet put its planes under a radar lock for four minutes and 30 seconds.

"We also have seen two of them, two violations of Turkish airspace," he said at a news conference. "Intelligence that we have received provides me with reason to say it doesn't look like an accident."

Turkey has been a member of NATO since 1952, and alliance rules say that an attack on any of the 28 member states should be treated as an attack on all.

Stoltenberg said the "substantial buildup of Russian forces in Syria" includes "ground troops in connection with the air base they have."

Stoltenberg said he doubted that Russia, which has been conducting airstrikes in Syria, was interested primarily in fighting the terrorist group ISIS, also known as ISIL.

"I'm also concerned that Russia is not targeting ISIL but instead attacking the Syrian opposition and civilians," he said.

The Pentagon also is worried about Russia's military activity in Syria.

The latest U.S. assessment indicates that Russia has moved ground combat weapons and troops to operate them into areas of western Syria where anti-regime forces are, according to two American defense officials. The United States sees the move as Russia "stepping up its ground activity" in Syria to attack those forces, rather than ISIS elements, according to one of the officials.

But Russian officials deny ramping up military activity. Officials quoted by state media said there would be no ground operation in Syria and -- in contrast to what officials had said earlier -- Russia would try to prevent any "volunteers" from going to Syria.

The tension between Russia and Turkey, however, appears to be escalating. The two countries are at odds over the civil war in Syria, with Russia backing Syrian President Bashar al-Assad.

"I discussed the situation in Syria with Foreign Minister Lavrov in New York last week," Stoltenberg said, referring to Russian Foreign Minister Sergey Lavrov. "I urge Russia to play a constructive and cooperative role in the fight against ISIL. And to strive for a negotiated political solution to the conflict in Syria."

Conflicting reports on strikes in Syria

As diplomats talked, the violence in Syria continued unabated.

The London-based Syrian Observatory for Human Rights reported that Russian strikes in and around Palmyra killed at least 15 ISIS militants and destroyed vehicles, posts and ammunition dumps there. Four more members of the terrorist group died in strikes in Raqqa, the Syrian city that has been referred to as ISIS' de facto capital.

"We don't rule out that terrorists may be preparing provocations in this and other settlements — to blast mosques and then demonstrate fake photo and video materials with accusations against Russian aircraft on the territory of the Syrian Arab Republic," the general said in the Tass report.

On Monday, U.S. President Barack Obama authorized the resupply of Syrian Kurds and the Arab-Syrian opposition as part of a strategy to put pressure on ISIS from the north and strengthen the border, according to two senior administration officials.

The approval came at a National Security Council meeting Thursday.

CNN reported over the weekend that Obama emphasized to his team that the United States would continue to support the Syrian opposition as Russia enters the war-torn country.

"President Obama was clear that we intend to continue our efforts to degrade and ultimately destroy ISIL in Syria and to keep supporting the moderate Syrian opposition," an official said.

Why are Russian airstrikes in Syria a big deal?

Russia has said it is conducting military operations to wipe out ISIS and other extremist groups. U.S. officials have seen the effort primarily as a move to bolster al-Assad, a close ally -- a goal Russian President Vladimir Putin does not deny.

It's believed the Russians are positioning weapons to support a Syrian ground offensive, officials said.

The equipment includes artillery as well as four BM-30 multiple-launch rocket systems -- all considered to be highly accurate. The latter is capable of rapid-fire rocket launches.

Putin's playbook in Syria draws on Ukraine and loathing for revolution

Several weeks ago, Russia moved about half a dozen artillery pieces into the port of Latakia.

The United States originally thought the move might be for defense of the port, but the latest action is an indication of potential ground attacks in the coming days, an official said.

The weapons have been spotted between Homs and Idlib and west of Idlib.

It is not clear if they're now in final position for possible artillery strikes.

The officials also said Russia has moved electronic jamming equipment into Syria. Both a truck-mounted system and a number of pods that can go on aircraft have been observed. The equipment could potentially give the Russians the ability to jam electronics of U.S-backed coalition aircraft.

6 graphics that explain the latest with the war in Syria