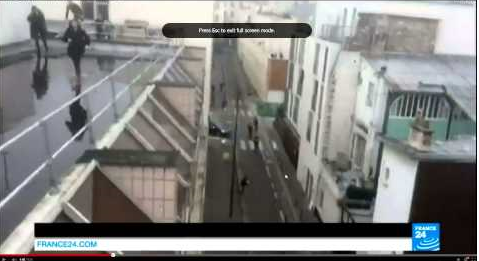 The above video shows that the security services did the false flag attack in Paris.

(THE LIVE FILM WAS EDITED)

The Paris Attack is a psy-op.

Indications that the Paris Attack was an inside job, involving Mossad and the French security services:

The journalists from Charlie Hebdo only gather in their Paris office once per week.
"A Charlie Hebdo reporter told the French newspaper Le Monde that the attackers had to have been informed that the editorial meeting was taking place, otherwise there are not many people on the premises."

Who would have informed the shooters about the meeting on that day?
2. There were police INSIDE the Charlie Hebdo offices BEFORE the attack took place.

"Two officers who had been assigned to protect editor and cartoonist Stephane Charbonnier for the past several years came down from an upper floor and intercepted the gunmen."

Confusion as French hunt magazine attack suspects
How is it that the police seemed so useless?
A journalist at Charlie Hebdo let the gunmen into the heavily protected offices.

Srangely, there were no armed police outside the offices.

3. There were heavily armed police in the vicinity and all over the centre of Paris.

"Outside the building, as the gunmen tried to flee in their Citroën van, three officers in a police patrol car intercepted them.

"Two suspects got out of the van...

"An officer ...ran toward the suspects. But the officer was shot and wounded by the suspects. He was executed with a shot to the head as he lay on the sidewalk."
Confusion as French hunt magazine attack suspects

After this policeman was 'shot' in the head with blanks, there is no sign of blood.

There are 3 different accounts of who this policeman was.

In one account he an officer who emerged from a police car.

In another account he is a policeman who came out of a police station.

And in a third account he is a policeman who was on a bicycle.

CanSpeccy alerted us to this video. Google keeps on censoring this affair, so here it is on LiveLeak.com - Charlie Hebdo police officer shooting zoomed in ...

(VERY CLEARLY THE POLICEMAN WAS NOT SHOT. THERE IS A PUFF OF SMOKE OR DUST FROM THE GROUND. THERE WAS NO MUZZLE FLASH OR RECOIL. THE WEAPON WAS NOT FIRED WITH LIVE AMMUNITION)
Google has been removing the videos that show this fake shot.
4. "After killing the officer, the gunmen returned to their car, shouting, 'We avenged the Prophet Muhammad,' the source said."
Confusion as French hunt magazine attack suspects
The purpose of this source would appear to be to label the gunmen as Moslems, rather than assets of Mossad and the French government.

5. Mossad and the French security services appear to have had their posters printed in advance?

Sasha Reingewirtz, 28, president of the Jewish Students Union, said of the killers:

"They want to scare French citizens."

Amchai Stein, the deputy editor of Israeli IBA Channel 1, just happened to be at the scene and has been posting photos of the shooting.

The whole purpose of the CIA-Mossad-NATO Operation Gladio was to scare the citizens of France and Europe.

7. In false flag attacks, the authorities often give conflicting evidence.

"Two senior U.S. counter-terrorism officials told NBC News that one of the suspects in the attack had been killed and that two others were in custody."

The 'patsies' were probably in custody before the attack.

The French authorities have named the 'patsies' as Said Kouachi, Cherif Kouachi and Hamyd Mourad.

Several of Hamyd's school friends have taken to Twitter saying he was in class with them at the time of the attack.

Said Kouachi, 34, and his brother Cherif, 32, were orphans who were brought up in a care home in Rennes in northern France.

The CIA and its friends like to mind-control orphans from children's homes to turn them into useful patsies.

The brothers had menial jobs such as pizza delivery man, and shop assistant.

What was the purpose of the 7 January 2015 attack on the offices of the satirical weekly Charlie Hebdo by assets of Mossad?

French MPs voting in favour of a Palestinian state.

France voting against Israel at the UN.

The objective of the attack is to turn public opinion in favour of Israel.

CanSpeccy alerted us to this video which apparently shows the fake shooting of the policeman.

Does the shooting of the policeman look totally fake?

Amchai Stein, the deputy editor of Israeli IBA Channel 1, just happened to be at the scene and has been posting photos of the shooting.

"Two black-hooded men entered the building with Kalashnikovs. A few minutes later we heard lots of shots," a witness told local TV station iTele, adding that the men were then seen fleeing the building.

Charlie Hebdo's editor-in-chief Gerard Biard escaped the attack because he was in London.

QuoteThe gunmen who killed 12 people in and around the office of Charlie Hebdo magazine in Paris acted with a skill and calmness that bears all the hallmarks of advanced military training."