A reincarnated Che Guevera has holed up in his lair in the last region of freedom. With his last loyal confreres, they fight the forces of evil. Guests are famous characters in history captured by Che's guards and brought to the camp for interrogation. Guests explain their roles in history and how they affect today's news. The cast provides a tongue and cheek backdrop. The show is geared to be a reality TV format geared to teaching younger viewers to be interested in and understand international relations, history, and the ultimate reality: today's news.

El Commandante Gringo George: A CHE loyalist forced to the fringes of civilization to keep fighting the revolution. Holed up in a camp in the wilderness with his last few revolutionaries, they take famous personages prisoner and get them to explain why the world is as it is today.

Captain Ron: A Green Beret officer who went missing in action in Vietnam in 1971. Capt. Ron was left behind when the U.S. forces evacuated. Left to his own resources, he fraternized with the Vietnamese and made his way to Central America only to see his country fighting more covert wars. He finds shelter with CHE's brigands and tries to right his country's wrongs.

Bill the CIA guy: Bill was flying planes for the CIA in the arms for Contras scandal. Left to fend for himself in the jungle after the mission was exposed to the media, Bill too joins forces with CHE and his revolutionaries. Feeling somewhat dejected at being left to die at the hands of the Contras, Bill decides to lend his expertise at the quest for truth.

The Bastille Chick: At the time of the storming of the Bastille, Bastille Chick carried the tri-colours over the ramparts with the men. Breast exposed in a famous painting and immortalized in eternity, Bastille Chick tries to convey to disaffected youth the eternity of class struggle. Stranded by time in the jungles of Central America, Bastille Chick joins forces with CHE to complete the revolution in the 21st century.

Comrade Lenin: The original October surprise. The man to completely change the course of history in the 20th century has had a change of heart. This time the revolution must be done right. No longer a vassal of sinister forces, Comrade Lenin joins forces with CHE and his followers to set the world on course away from perpetual conflict.

Guard Mike: A young battle hardened revolutionary, Mike provides security at the camp and rounds up the prisoners for interrogation.

Guard Gary: A former British soldier who saw the evil of his country's ways, Gary goes AWOL in Belize and elopes with a revolutionary woman. He provides security at the base and rounds up prisoners with Guard Mike.

Guard Sarah: Another young battle hardened revolutionary. Sarah was orphaned at an early age after her parents were killed by security forces in the endless Central American wars of the latter 20th century. She has thrown her lot in with CHE.

The camera starts filming in the tent. CHE and his guerillas are seated around a guest playing the guitar. It is a classical piece. The cast is cleaning their weapons. They appear somber and reflective having ended the previous show with a gunfight. The tent flap abruptly opening interrupts the scene.

The guards enter with a distinguished woman in a long dress.

Evita: "I am the wife of El Presidante. I demand that you release me immediately. There will be dire consequences to your actions."

CHE: "And who will orchestrate these dire consequences madam?"

Evita: "My husband of course."

CHE: "Pray tell dear woman. Who is your husband?"

Evita: "Yes I am Evita Peron. Now unhand me you lechers."

Guard Sarah: "Make sure you save the dress before she is executed. It would be a sin to ruin it."

CHE: "Now, now no one is going to be executed quite yet."

Guard 2: "But El Commandante, the Peron's looted their country and oppressed their people. They have no right to fair or decent treatment."

CHE: "We are revolutionaries; that is true, but we will not adopt the ways of the fascists. Come Mrs. Peron. Have a seat."

Capt. Ron: "You are a dynamic personage in history. Popular culture has made you into an icon without the stigma of an Imelda Marcos."

Bill the CIA guy: "Evita was akin to royalty."

Bill the CIA guy: "Don't thank me. I mean you had style but in a despotic sort of way. Few people know what role you really played in history. Tin pot dictators routinely loot their treasuries. You, however, have partaken in some of the greatest crimes of the century."

Evita: "I have no idea of what you mean."

Bill the CIA guy: "Really. I have been an intelligence operative for some time and my father before me."

Capt. Ron: "Surely you understand the significance of war. You must be aware of the wholesale looting that accompanies the slaughter."

Evita: "We came across our fortunes earnestly."

Guard Sarah: "The hell you did."

Capt. Ron: "Confession is good for the soul. Aiding in confessions is my specialty."

Evita: "I have nothing to confess."

Bill the CIA guy: "At the end of the war didn't you help safeguard assets from Germany?"

Evita: Stares off to the left 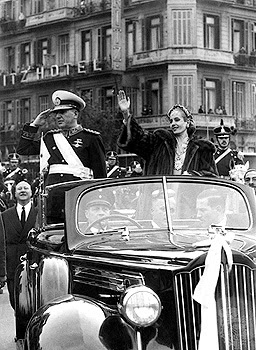 Bill the CIA guy: "My father was with the Counter Intelligence Corps during WWII. He explained the Underground Railroad of escaping Nazis. They fled to Rome and were given Vatican passports. Then they traveled to many South American countries. Argentina was a major thoroughfare. Wasn't it?"

Evita: "Many people fled Europe after the war. I could not keep track of all the refugees. Their motives are a mystery to me."

Guard 1: "What significance does this have?"

Capt. Ron: "A great deal of significance my young friend. You fight for ideals. Leaders usually allow you to fight so that they can abscond with the wealth. Germany profited handsomely from the war. Think of it as the ultimate bank robbery. Central Bank gold and currency reserves for the taking."

CHE: "The last thing a defeated army will surrender is what it has taken. I have read on the subject. The Nazis sent U-Boats filled with loot to Argentina. There were many shipments. Dear sweet Eva received them."

CHE: "Of course dear sweet Eva wasn't satisfied with a mere commission on the greatest thefts in history, she stole the money from the thieves. Once Germany was defeated, there was no force behind the conspiracy."

Bill the CIA guy: "You whacked the Germans and kept most of the money for yourselves. War criminals couldn't take you to court. Shall I go through the list of names. Then the money was sent to the Swiss for safety. You set up a charitable foundation to masquerade the money laundering."

Evita: "That is all conjecture."

Evita: "I have never heard of these people. Who are they?"

Bill the CIA guy: "They were your fellow trustees. Now they are all dead."

Guards: "What became of the money?"

CHE: "That is not known precisely. I think we can be certain it doesn't help the poor. but Swiss banking laws preclude our finding out I'm afraid. The American occupation forces are said to have run the most corrupt administration known in human history. There were fights between the Counter Intelligence Corps and the O.S.S. Men died. Gold does terrible things to men."

Evita: "They get to wear nice dresses."

CHE: "There is no justification. At least there is no earthly explanation. Demons possess these people. It explains much however."

Bill the CIA guy: "Exactly. The High Commissioner for occupied Europe was John J. McCloy. The Swiss O.S.S. man was Allen Dulles. Champions of Justice allowed to sit on the Warren Commission. The battle of the century was the battle to control these funds. The people see the bodies fall and never understand the reason why."

Capt. Ron: "I learned the reason why. That is why they left me in Vietnam. Isn't it funny that so many authors perished trying to write the history of the Counter Intelligence Corps. Their history became a State secret. Robber barons control government that make the laws that control information."

Guard 2: "All for the common good no doubt."

Guard Sarah: "Nice dress. We'll bury her in it."

CHE: "Comrades, the truth is our objective. Once the masses understand the nuances of history, they will be better about to decide their destiny. They won't be so easily manipulated. The whole raison d'etre of these intelligence agencies has been to use national security to masquerade the crimes of their members and their respective masters."

Evita: "You have quite interesting insights for filthy subversives."

Guard Sarah: "Filthy? We haven't stolen the teeth from helpless people. There are crimes that transcend any evil that could be imagined by the masses. I am only starting to comprehend the depth of this."

Bill the CIA guy: "Yes Sarah, they took everything, and then they killed anyone who got in their way. No matter who they were."

Capt. Ron: "This will be a blight on humanity until it is made right. Her execution couldn't do it. A revelation of Biblical proportions would be necessary if the masses would even listen to it now."

CHE: "They must listen. Even if we have to force them to. Take her away. It is too difficult to be near her and restrain oneself. That such a terrible war could have been fought for so long at such cost only to have the loot taken again disgusts me. We will never cry for you Argentina. You received your penance. All the gold in the world couldn't stop you from passing away. Did you succumb to blind ambition or did you get your just reward from your cohorts like many that have preceded you."

Guard Sarah: "No Eva, they loved their gold, and they needed to protect their secret. You were expendable. You came from the dirt just like us. They use your kind. We understand. That is why the revolution is so precious. The struggle can never end."

Guard Sarah: "We will never forget. We will learn what ever it takes. We will defeat them."

The scene ends with the guitarist playing 'Don't cry for me Argentina.' The camera fades away.