HOW THEY FAKED THE WORLD'S GREATEST WAR PHOTO

In a way this is the story of Time Catalysts as well. It is a timely snippet of history reserved for the aficionados of mind control and programming because none of the details surrounding the picture were true, and none of the details concerning the photographer were real. Yet he was developed as one of the greatest war photographers of all time. The masters of illusion control the debate. They set the stage even today with the moving pictures on the telescreen. We, as partakers of the venom, accept the illusion as fact and succumb to the effect. What has fallen in this image is not the soldier. He did truly fall but not in the manner stated. It has always been alleged he was shot in the Spanish Civil War. Though he was a Republican, he was not shot. The photos were taken during maneuvers miles from the actual fighting. The title of the picture was The Falling Soldier. The photographer was Robert Capa, but that is a long story because there was no Robert Capa. His persona was a creation that was eventually adopted by the man who may very well have acquired the image from his deceased former love flame killed in the war in a Stalinist purge. 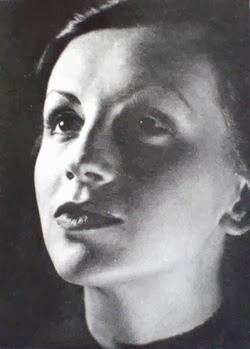 The story is deep and complex and starts as a love story. Two star crossed idealists born Jewish in a rising spectre of intolerance come together with a passion for politics and photography. They traverse the road of the left in resistance to the right rabidly sweeping Europe. They form union in Paris the eternal city of love and romance. Who could blame them. The female half of the equation was born Gerta Pohorylle in Stuttgart, Germany in 1910. She fell out of favour with the Nazis and fled after an arrest. In 1935 she met the other real person Endre Friedman born a Hungarian Jew. They fell in love and formed a photographic union. In order to better market their pictures they created the persona of Robert Capa an American.

An epic struggle was on the horizon. The war drums were beating in Spain. The age old battle between the left and the right was in progress. Europe was the prize. Who should win? All the great thinkers, writers and artists were united in the cause of a socialist paradise. The likes of Orwell, Hemingway, Waugh, Yeats, and Eliot were the calibre of intellectual flocking to the cause. Some were for the Nationalists. Some were for the Republicans who were socialist by philosophy. The movie greats, too, were united in the fight. The all time movie epoch Casablanca was based on the anti fascist struggle. In fact Ingrid Bergman fell to the charms of the great Robert Capa. How could we not be motivated to the struggle? There was one mistake made by these great pillars of wisdom. We exist in a quantum universe. All were right and all were wrong, and they killed for it. Both the left and the right are part of the same body politic Satan masquerading as an angel of light. That is why the Christ of the great celebration left us with one final Commandment to love one another. It was the simplest way to offer protection to a very complex universe. 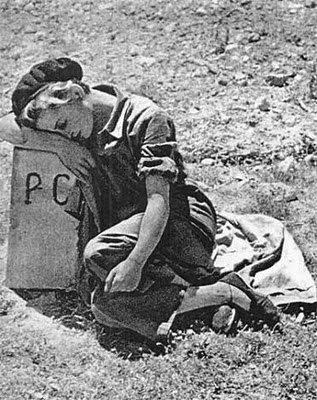 One of Gerda's masterpieces

Gerta adopted a new name as well Gerda Taro from the Japanese artist Taro Okamoto. In times of great social upheaval another identity may be a safe harbor. The eve of a rapidly approaching world war was such a time. Our lovers went to Spain and covered the war as photographers on the Republican side. The great deceiver Satan loosed his tentacles. Socialism like fascism has little use of the great faiths and their teachings. Gerda fell to the affections of others in the cause the likes of Hemingway and Orwell. Endre fully enveloped in the role of Robert proposed marriage. He was rebuffed. Gerda started her own company. She passionately photographed the war. Robert withdrew to Paris like Humphrey Bogart in Casablanca perhaps in despair. Only this time there was no Captain Renault played by Claude Rains to round up the usual suspects while our lovers fled. Gerda followed the Republicans after their retreat at the Battle of Brunete. Unknown to all the idealists were conducting a Stalinist purge of those not left enough. Gerda fell under the treads of a Republican tank. She died later in hospital. There were stories she fell off a running board of the vehicle she was riding on. There were witnesses stating the tank drove into the car. Willy Brandt the future Chancellor of Germany was one of the witnesses and knew of the purge. Robert gained possession of her photographs. There is a body of opinion The Falling Soldier was hers. Much of Robert's work was lost in Mexico only recently coming back to view. Gerda's negatives were included. 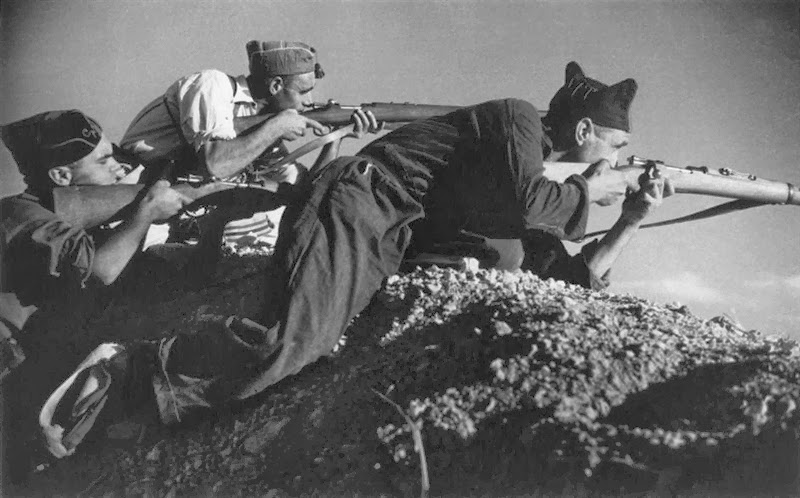 The picture was published as Robert's. It was said to be the anarchist militiaman Federico Borrell García. The difficulty lies in the fact they do not look alike. Garcia died at Cerro Muriano where the picture is alleged to have been taken. However, the location is really Espejo 30 miles distant. José Manuel Susperregui of the University of País Vasco published a book on the photo and determined the real location. The Barcelona newspaper El Periódico de Catalunya found the lay of the land as well. Richard Whelan, in This Is War! Robert Capa at Work posited the opinion that the photo was staged. From other negatives there were a series of photos the 6th and 7th showing another man falling. The published one was the 5th in the sequence. Other photographs of the man show him alive and well. It has been said they were snapped after the 'event' which may have been maneuvers. Robert was lost in the Viet Nam War on May 25, 1954 after he stepped on a land mine. 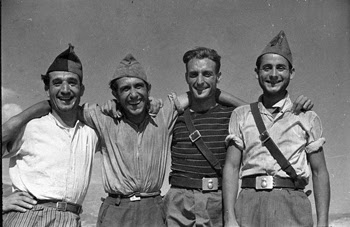 So you see there is nothing new under the sun. There are people in the shadow factory that play the game of Plato's Cave very well. They deceive us at crucial junctures to advance an ideology of both the left or the right. The truth that sets us free is their mortal enemy. Today many years later photographs and actors adorn the stage in Plato's Cave to manipulate our thoughts with false paradigms in the age old attempt at setting the world in the hands of evil. One of the latest was, of course, the Sandy Hook shooting. An actor was presented as a bereaved father. A dead victim mistakenly was photographed with the President another man who assumed an identity of an imaginary figure. They have come a long way. We have let them by not being critical. We are slaves to our emotions and the projections of Plato's Cave. I guess that's just LIFE until we change the channel. I believe the truth will set us free. All you have to do is embrace it.

They still fake everything. They are releasing Sandy Hook images on this first anniversary. Something noticeably absent is the blood on the floors. There is no point of impact in the falling soldier's body. There is no blood either. Nothing has changed with faking except maybe the audacity of the fakers.