CAPTAIN PETTIGREW, SS BEAVERFORD AND THE BATTLE FOR CONVOY HX84 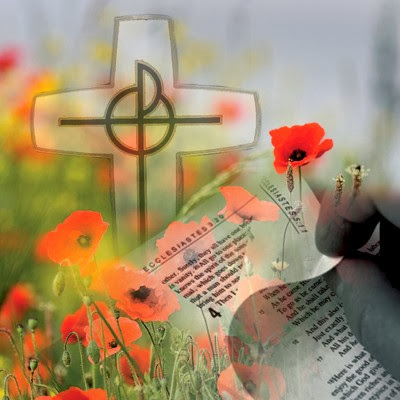 November 11th is the anniversary of Armistice Day marking the end of WWI the war to end all wars at least until the next WWII. At the 11th hour of the 11th day of the 11th month, we pause to remember the men and women who died in the greatest calamity created by man - WAR! As time fades, so do the memories. The greater battles and events may linger longer, but they too, slowly subside. One I found while researching the Canadian Pacific Line which brought my grandparents to Canada was the story of the SS Beaverford a cargo ship in convoy HX84. It was attacked by a German pocket battleship. The rest is forgotten history. Lest we forget; let us remember.

On November 5th 1940 an epic and one sided battle occurred in the Atlantic around Convoy HX84. Though a footnote in history after 73 years, one of the greatest acts of courage in Canadian naval history took place on the SS Beaverford under the command of Captain Pettigrew a veteran of the Gallipoli campaign. 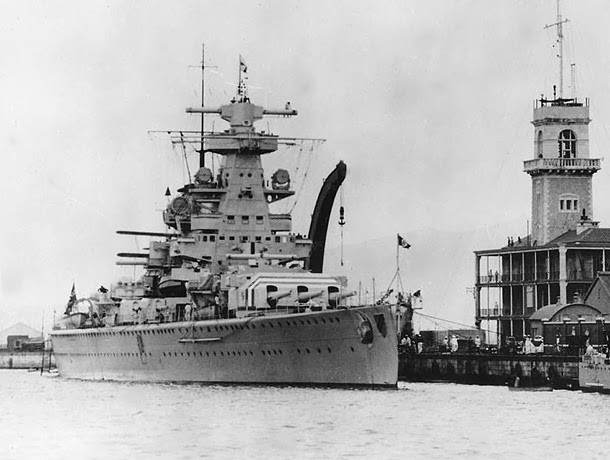 Convoy HX84 was attacked that day by a German pocket battleship. The Admiral Scheer was armed with six-11 inch guns, eight-5.9 inch guns and torpedoes. In another epic battle its sister ship the Graf Spee, fought three British cruisers to a draw in the Battle of the River Plate. 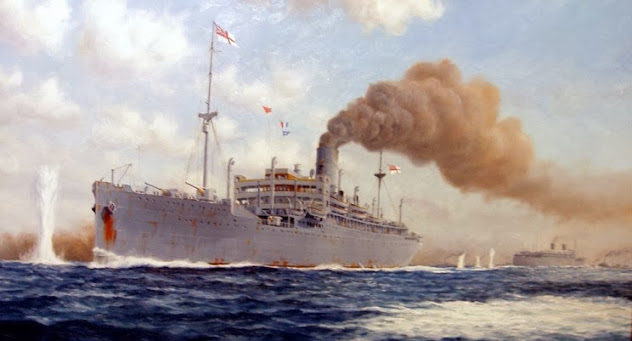 This time, however, the only escort vessel would be the Armed Merchant Cruiser HMS Jervis Bay. This vessel was a converted passenger ship armed with antiquated 6-inch guns from the First World War. To the uninitiated that isn't much protection because passenger ships have no armour plate and are very vulnerable to shellfire. Admiral Scheer's cannon would easily penetrate into the Jervis Bay while she stayed well outside of the British ship's guns.

HMS Jervis Bay did her duty. She positioned herself in the path of the battleship while the convoy scattered. It did not last long. She succumbed to her wounds in about 20 minutes and foundered. Her crew received medals including the Victoria Cross and the Distinguished Service Order. The Swedish ship Stureholm moved in to rescue survivors. This story has been immortalized in books and a movie. 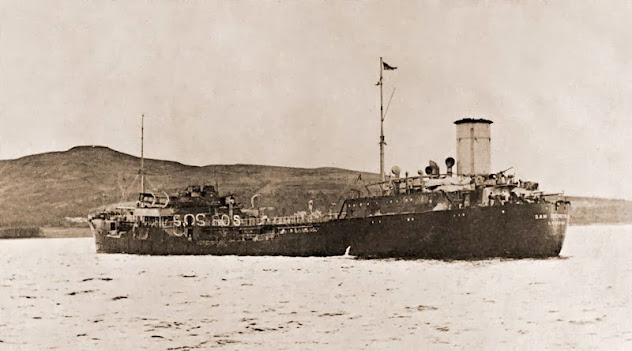 Admiral Scheer moved in among the fleeing ships. Another remarkable action was her attack on the San Demetrio. This ship was a tanker carrying 12,000 tons of aviation gasoline. She was set ablaze and the crew took to the boats. One of the lifeboats was rescued. The other wasn't. The men of that boat returned to the still burning vessel after two days in the water. It was a miracle that the San Demetrio didn't explode. The crew put out the fire and sailed their ship back to England through U-Boat infested waters. A movie was made about their exploits. In the battle for convoy HX84 legends were made. 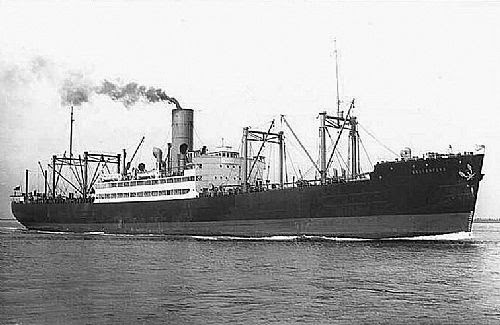 BUILT IN GLASGOW BY BARCLAY CURLE & CO, AND LAUNCHED IN 1927. SHE WAS MANAGED BY THE CANADIAN PACIFIC STEAMSHIP COMPANY, BUT ACTUALLY OWNED BY CANADIAN PACIFIC RAILWAY CO. IN 1940 SHE WAS REQUISITIONED TO CARRY WAR SUPPLIES, THE REASON SHE WAS PART OF CONVOY HX84. SHE WAS SUNK BY THE ADMIRAL SCHEER AFTER ENGAGING THE GERMAN RAIDER, IN AN ATTEMPT TO ALLOW THE REST OF THE CONVOY TO ESCAPE, ALL 77 CREW MEMBERS WERE LOST.

Captain Pettigrew made a decision to turn his ship around and face the German head on. The Beaverford was armed with one 4-inch gun and one 3-inch gun. It had no armour plate either. It never got within range to hit the battleship. However, he skillfully manoeuvred his ship dodging shells for four and one half hours. Admiral Scheer fired twelve 11-inch shells with three hitting Beaverford and seventy-one 5.9-inch shells with 16 striking their target. It wasn't until 10:35 p.m. that Admiral Scheer destroyed the Beaverford with torpedoes. The ship was lost with all hands. There were 77 crew members aboard.

Captain Pettigrew and the men of the Beaverford bought valuable time allowing the other ships to scatter in the darkness. Thirty-two vessels made good their escape out of the thirty-eight ship convoy. The actions of these men were another legend, but one that is not too well remembered. There was no book. There was no movie. There was just the legend.

Captain Pettigrew had a strange foreboding before he sailed. He broke tradition by not dining aboard ship with his friends telling them it would be their last time together. A school in England adopted every ship. It surprises me that after 73 long years, they still remember. A plaque is mounted in the school to the men of the Beaverford. They have posted details of the action, the ship, and the casualties on a website. They are remembered. I, too, remember. Years ago while researching my grandparents' journey to Canada; I found interesting history on the Canadian Pacific ships of which the Beaverford was a part. Legends should never be forgotten. A Canadian freighter fought a German battleship and even though David did not slay Goliath, he did save his shipmates. We should be thankful and proud. 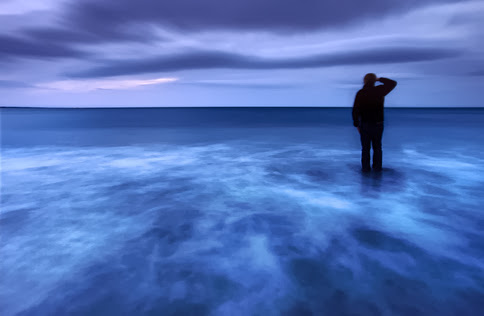