Traffic on the Merritt Parkway sits at a standstill following an accident Friday evening between extis 35 and 36 northbound. Photo: Contributed Photo

STAMFORD -- A 46-year-old Newtown man who worked behind the scenes on numerous blockbuster films was killed in a head-on accident on the Merritt Parkway Friday evening.

Scott Getzinger, a property master who provided props for more than 25 films, including "Spider-Man," "Independence Day," "The Truman Show" and the upcoming "Men in Black III" and "The Dark Knight Rises," died at Stamford Hospital after sustaining severe injuries.

Getzinger suffered multiple broken bones, but was described as conscious and alert after being cut out of the 2002 Ford F-150 pickup truck he was driving. State police initially characterized his injuries as non-life threatening.

The accident was reported at 7:02 p.m. when a 1999 Lexus RX300 driven by Alexandra Orteig, 18, of New Canaan lost control while traveling south on the parkway near Exit 36 and spun around, striking the center median guardrail and crossing over the highway into the northbound lanes.

Getzinger was driving northbound in the right-hand lane when the Lexus SUV slammed head-on crushing the front-end of his truck.

Orteig and a 17-year-old passenger also from New Canaan were also taken to Stamford Hospital. Orteig was admitted overnight and released Saturday. The passenger was not admitted to the hospital.

The accident shut down both sides of the parkway in Stamford for about 90 minutes as volunteer firefighters from Turn of River Fire Department worked to cut Getzinger out of the truck and paramedics attended to all three victims.

State police said the accident is under investigation and no charges have been filed. Scott Getzinger, 46, of Newtown was killed in a head-on collision on the Merritt Parkway Friday evening. Getzinger was known for his behind-the-scenes work on a number of blockbuster films and well-known television shows

The scene of infamy from The Dark Knight Rises. 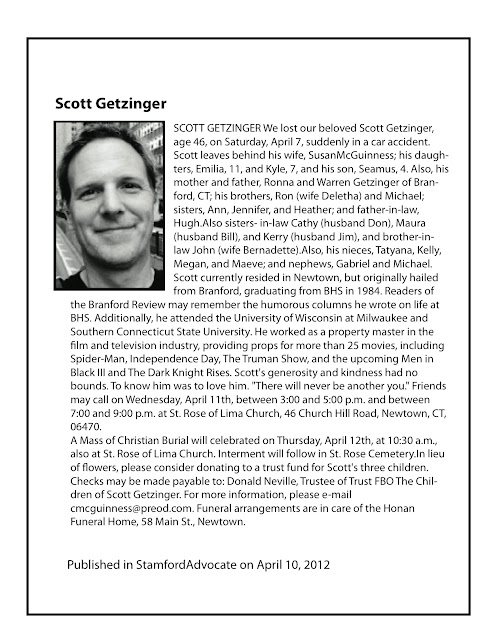 Confessions of a Shopaholic - 2009

Indiana Jones and the Kingdom of the Crystal Skull - 2008

Master and Commander: The Far Side of the World - 2003