There were two stories that caught my attention last week. Nuclear weapons errantly ended up on a B-52 and were shipped across the United States, and adventurer Steve Fossett went missing. In this modern era of universal deception and deceit both attracted my attention as highly unlikely to have occurred, but since they have, I have concern that they're linked. That would seem to be a stretch unless one is familiar with the territory around where Mr, Fossett went 'missing'.

Mr. Fossett was visiting The Flying M Ranch owned by Barron Hilton. This mammoth property of a million acres is leased from the U.S. federal government. It is a sanctuary to the rich and famous especially those gifted in aeronautical skills. Mr. Fossett is an accomplished pilot and adventurer who holds many records. On Monday September 3rd, he took off in a small single engine Citabria Super Decathlon aircraft. It has a range of about 4-5 hours of flying time, and is very airworthy as a stunt capable plane able to handle 4-5 G's. The aircraft was also equipped with a locator beacon that automatically activates during a 'hard' landing. At noon Mr. Fossett was overdue from his three hour flight that was ostensibly to be exploring for flat lands to break the land speed record. 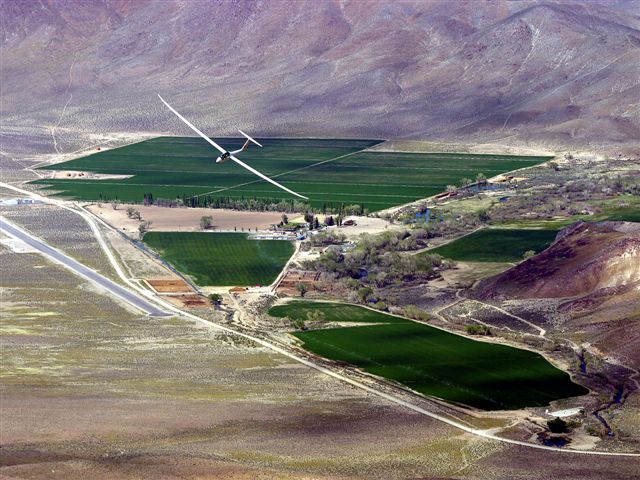 The private airstrip, where aviator Steve Fossett took off from Monday, located at the ranch of hotel magnate William Baron Hilton, near Yerington, Nev. is seen, Wednesday, September 5, 2007. A search, by several agencies, for Fossett continued Wednesday after he was reported missing Tuesday morning.

A quick examination of the terrain reveals that Mr. Fossett could very well have travelled southeast. He was looking for flat land to race in. He had little time. Yet the search is including mountainous areas. Of note the FAA says he did not file a flight plan. In this age of overt security that borders on paranoia, that would seem to be unusual. Some of the most restricted airspace in America is nearby. Nellis Air Force Base is an enormous complex that operates in the grey and the black. It includes the Tonopah Test Range, Area 51, and Groom Dry Lake, and Desert Rock Airstrip. These pieces of real estate are very grey and frequently black. Trespassers are put on notice that they will be shot if they enter onto these properties. Tonopah has a concrete runway of 12,000 feet. It was the home to the Stealth fighter when it was a secret entity. Groom Lake handled research and tests of nuclear weapons. Area 51 is extremely secret. Desert Rock was a field that handled the black flights. 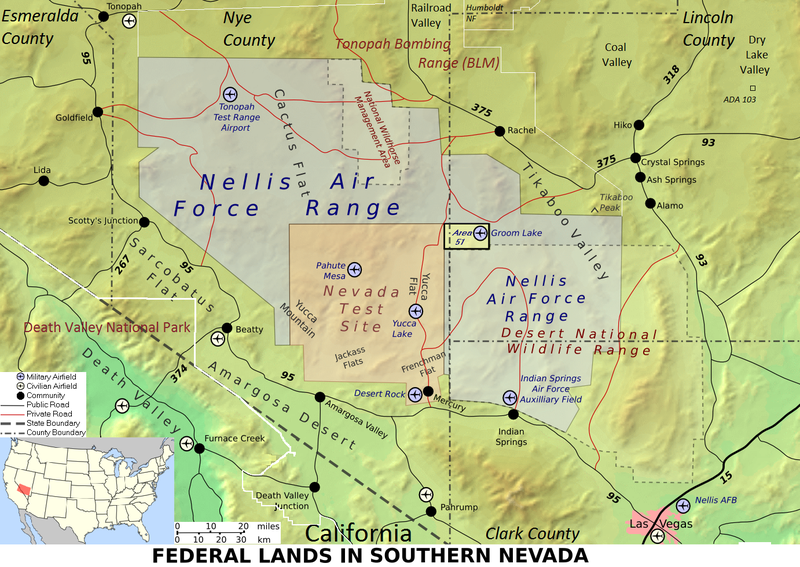 For the unfamiliar, flights that travel 'under the radar' so to speak are called JANETS. These aircraft keep in touch with Flight Control Centres, but as they approach Nellis, they are handed off to military control. They have pre-arranged frequencies and are excused from following normal flight protocols. Tonopah Test Range Airport has the FAA designation of TNX. There is a little known 'tie in facility' designated TKM. Even more off the radar is the Desert Rock Airstrip DRA. That one isn't in the FAA file. There is flat terrain in the area. It is within range of Mr. Fossett's aircraft. There are also numerous abandoned landing strips in the area that are available for the shadow services. 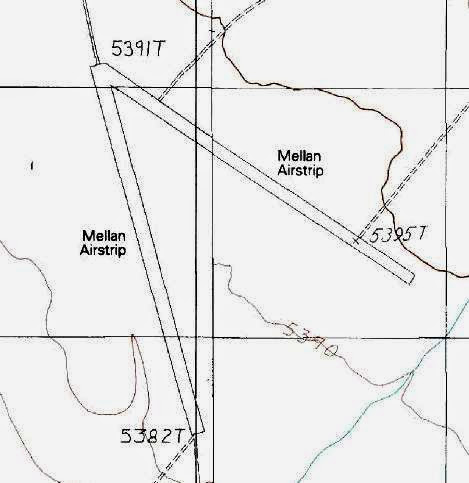 It was labeled as "Mellan Airstrip" on the 1987 USGS topo map, which depicted the airfield as consisting of 2 paved 5,300' runways. 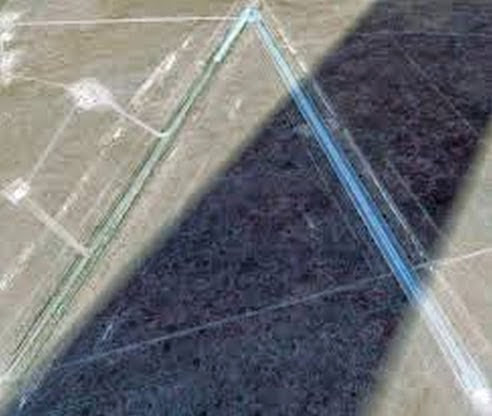 Mr. Fossett has been virtually everywhere and done everything that could be expected of an adventurer. He carries a satellite phone and has always called his wife whether it be from the Coral Sea, Mount Kilimanjaro, dog sledding in Alaska, or Calais, Le Mans, and Boston. This time there is no word. Worse yet the emergency beacon hasn't gone off. That is supposed to also be highly unusual.

The other highly unusual event commenced on August 28th. A B-52 bomber was loaded with what was originally stated to be 5 nuclear armed Advanced Cruise Missiles. They were sent from Minot, North Dakota to Barksdale Air Force Base in Louisiana. To the uninitiated this may seem relatively routine. Let me assure you. It is not.

In 1991 the Strategic Arms Reduction Treaty was signed under President Bush (41)'s administration. It mandated that all bombers cease loading nuclear weapons as a reassurance that attacks were not being prepared. Nuclear weapons are supposed to transported in cargo planes like the C-17 or the C-130. Furthermore, and this is most important, nuclear weapons are not to be moved without specific approval from the Squadron Commander in charge of munitions. The U.S. Air Force uses a computerized tracking system to keep track of the weapons. They are much heavier than other weapons and clearly marked in red. In fact the ground crew at Minot were the recipients of two safety awards during 2006.

So how did this happen? Obviously it wasn't a mistake. The source of the story were unnamed Air Force officers who saw something very nasty going down. Barksdale Air Force Base is the transfer point for shipments to the Middle East. They leaked the story to the media and turned the grey and the black into white. The story suddenly corrected itself. There weren't five ACM's on the B-52; there were in fact six. A further ambiguity were reports that the 3 1/2 hour flight actually took 5 hours. That left plenty of time for a diversion if necessary.

We are being told repeatedly that Al Qaeda has nuclear weapons which they don't, and that they're going to attack America. The Director of the CIA was alluding to this this morning on Coast To Coast AM. If the whistle wasn't blown, I believe at least one or possibly all of those weapons would have disappeared and become available for covert use. The only place secure enough to deal with such a diversion is. in the Nellis Air Force Base vicinity. Tonopah Test Range Airport is actually registered to the U.S. Air Force in Langley, Virginia. That place sure sounds familiar being the home of the CIA. Desert Rock Airstrip has been regularly used for covert flights to Groom Lake and Area 51. We have to speculate about the tie in facility to Tonopah known as TKM.

What if the switch was made and an unsuspecting adventurer got a little too close to the covert action of the century - the acquisition of a nuclear weapon scheduled for destruction to the CIA's agents provocateur Al Qaeda. Even though he's rich. Even though he's well connected. No one walks away from a black ops of this magnitude. These landing strips are the most protected ground on Earth. Fossett's little plane wouldn't have stood a chance. It would have been short work to jam his communications equipment and force him down. Great pilots like Fossett shouldn't fall off the face of the Earth. He's been in some of the most hostile territory known to man under the worst conditions. Yet this little jaunt from The Flying M Ranch was the trip into oblivion.

Blue Shaded area is the Nellis Air Force Base complex south and east of the Flying M Ranch. It's 260 miles to Tonopah. A regular Dacathlon has a range of 563 miles.

Of course since then the wreckage was found with the properly planted pieces arranged just so a year after the event. The search was so extensive wrecks were found from as far back as the 1920's. I did this material on an American alternative media program. It grew legs of course. The pilfered weapon was NOT used for a nuclear 9/11. That's good value for your money. Nobody smells out the rats like me. They can only fold their tent and wait to try again.