THE MOBY DICK GOOGLE DOODLE The Sign of Jonah

"There she blows!" is the classic line from the novel Moby Dick. Today Google is celebrating the 161st anniversary of Herman Melville's classic novel. It was the story of the madness of obsession. It is the story of a leader possessed with an insatiable desire to overwhelm and destroy his imagined enemy even at the cost of his life, his ship and his crew. It is the story in the style of the Google doodle of the events shaping the world stage today. It is the tale of the potential conflict with Iran (Moby Dick) and the King of the North the next possible President of the United States Mitt Romney (Captain Ahab). 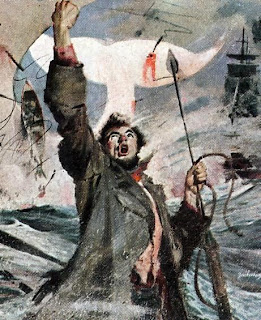 Moby Dick was published in October of 1851. In those years the Mormon church was quite active as it is now. There was an intense struggle for the control of thought and mind as it was decided by their prophet Joseph Smith who may very well have been a British agent sent to destroy America and return it to Britain. The main character Captain Ahab is in the style of the time like Brigham Young. His modern era counterpart, Mitt Romney, is obsessed with a whale (Iran). He invents every manner of word to invoke great evil upon it. However, the evil is manifested most in Ahab.

Moby Dick seeks thee not. It is thou, thou, that madly seekest him!

Towards thee I roll, thou all destroying but unconquering whale; to the last I grapple with thee; from Hell's heart I stab at thee; for hate's sake I spit my last breath at thee.

Thus I give up my spear.

The time is fast approaching where the monolithic struggle will commence. Ahab will wait with his spear to thrust it into Moby Dick as he claims his rightful claim to the air we all breathe. In the modern era Iran is claiming its rights under the Nuclear Non-proliferation Treaty most nations have signed. Like the whale as she lays claim to the technology Ahab will be waiting with the harpoon to stab the whale to death. It is ironic, a major component of the naval arsenal is the harpoon missile. It would seem conceivable than it will be fired in the start of the titanic battle that awaits. The beginning of the novel starts with, "Call me Ishmael." And who is Ishmael if not perhaps a supreme authority. Is it not the Mormon doctrine that their 'prophet' is the living supreme authority the Ishmael of the Earth? Cannot he summon the powers of hell to shoot the harpoon at the King of the South (Iran) to invoke the Armageddon to bring the return of Christ? This has been a plan or 'conspiracy' if you will for some time. The Middle East was designed by prophecy to set the stage for the demise of the human race for Christ's sake. The weapons of mass destruction were issued to the belligerents to fulfill a bizarre destiny.

Talk not to me of blasphemy man; I'd strike the sun if it insults me.

There is a wisdom that is woe; but there is a woe that is madness.

We see in these words that Captain Ahab the King of the North will strike the sun. The sun in this era can be the power of the atom the ultimate weapon carried upon the harpoon of the mad man. His wisdom of the King of the South Moby Dick being his enemy is woe. That woe is madness. Herman Melville codes the King of the North in his works on the South Pacific. After extensive travels he returned aboard the frigate USS United States. The media waged jihad against him claiming he was 'CRAZY'. He travelled the Holy Land and wrote an epic poem Clarel. The books were burned by his publisher over lack of payment. He spoke of a faint rainbow over the Dead Sea fading away with hope. He spoke of John's city over Sodom and Gomorrah. In scripture we are told there will be no sign except Jonah. Who was Jonah? He was the man sent to warn Nineveh. Jonah tried to escape his duty and was swallowed by a great fish or whale. He was spit out after three days. Captain Ahab tried to kill the whale to prevent Jonah from warning Nineveh in his madness perhaps.

A wicked and adulterous generation seeketh after a sign; and there shall no sign be given unto it, but the sign of the prophet Jonas. And he left them, and departed. 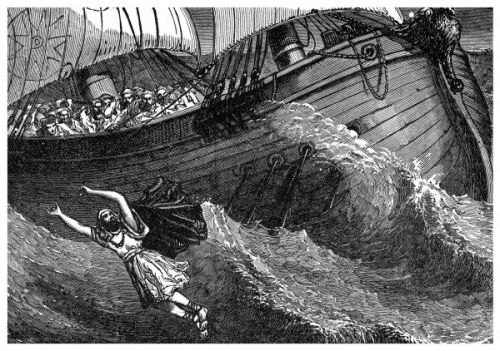 There will be no sign except the prophet Jonah. Google shows us the whale. We are a wicked and adulterous generation. The whale of the doodle is the sign. In the twilight language we are being told to amend our ways lest the rainbow fade. The harpoon of Ahab can be nuclear tipped. The USS United States has faded from history or has it? The USS Harry S.Truman a modern aircraft carrier was laid down as the USS United States. It received a name change in 1995.

There will be no sign except the sign of Jonah. There are signs everywhere. You just have to open your eyes to look. You have to allow your ears to hear. Google whether they understand it or not have given the sign. All we have to do is heed it. I'm George Freund. This is Conspiracy Cafe. There is nothing else like it anywhere on Earth.

All that most maddens and torments; all that stirs up the lees of things; all truth with malice in it; all that cracks the sinews and cakes the brain; all the subtle demonisms of life and thought; all evil, to crazy Ahab, were visibly personified, and made practically assailable in Moby Dick.