THE DARK PRINCE WAS A MANCHURIAN

-
The more things change the more they remain the same. All you have to do is clear your mind and openly consider the facts of the matter. That is inherently difficult to do because our minds have already been conditioned by the media borg and thought control establishment. There has been another mass shooting. This one can vie for the worst of the genre in North America. It was another sick and degenerate attempt to usher acceptance of 'change' to the human condition. We are like cattle to the effect that when the pistol is discharged, we stampede. We care not about the rhyme or reason. We just stampede. The news media will then operate a conditioned response to lead us in the direction the guiding hand wished us to take. You would almost think an obscure arms control treaty was languishing in the wings which it is. The United Nations arms control treaty needs American and Canadian support. A mass shooting or two would grease the wheels well. We only disarm you because you desired it. We only created the police state because you asked us too. Welcome to the theatre of the mind. We hold the cards and play them at our will to direct your reaction to the stimulus of the mass shooting. That George guy says the world moves at the speed of the predator. They know. They are the predators.
-
Of course there are legions of facts that are concealed from you. You can find out about them, but that takes work. Generally very few will be inspired to labour. Those that do quickly realise they are swimming up stream. In the struggle for domination of the planet and its people that is a minor nuisance. We know where they want to go world dictatorial government. As an old cowboy of yore we can head them off at the pass. The pass is control of the world's firearms. Their stratagem is to create crises that lead us to beg to be disarmed so that when the new order is established resistance will be futile. I learned that trick before. It usually occurs before war. Great dictators disarm their citizens before the steel hand is deployed.
- 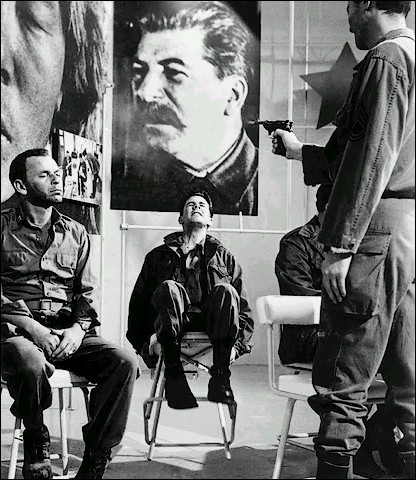 -
Of course the film industry reported the technique twice in versions of The Manchurian Candidate from the novel of the same name
-
The stage is set, the cameras are rolling; but it is the special effects that win the Academy Award for this picture unfolding. The major screen tool for altering your mind and opinion is the tool of altering other peoples minds. It is MK Ultra. It involves the use of drugs, hypnosis, electroshock and flat out torture to brainwash someone. It is no secret. President Ford appointed Vice President Nelson Rockefeller to head a commission to report on same. He was a wise choice because his forefather John D. Rockefeller started the modern version of the program way back in 1909 with a $300 million funding from Standard Oil to the Rockefeller Foundation. In fact Nelson worked so hard it is said the progeny lead to a Satanic cult called The Process-Church of Final Judgement. It's most popular member was undoubtedly Charles Manson. An assassin of note was David Berkowitz the 'Son of Sam' killer. However, it was the lesser known Lynette 'Squeaky' Fromme and Sara Jane Moore who tried to assassinate President Ford. I dare say we're starting to see a definite pattern. It's the history of American politics. Vice Presidents get to be Presidents. The heads of commissions looking into the assassination of a President can be removed from the body politic. It's been going on forever. We just aren't taught the technique.
- -
Few if any media sources will provide this sort of background material. It is still going on. It is not debated all the much, but let me assure you it is fought over greatly. I surmise the main function of Guantanamo Bay is to screen candidates and 'Manchurianize' them for covert action roles. I would tend to expect the recent Bulgarian bus bomber, Mehdi Ghezali, a Guantanamo alumnus was so created. Of course the reason is obvious; it fits the pattern. You create the crisis to have the solution in this case a war with Iran. We fall for it every time because they know as humans we will react emotionally to extreme stimulus.
-
The battle was fought out in the mass shooting event at Fort Hood, Texas. Everyone knows the alleged shooter Major Nidal Nasan, but do they delve into the fact he was a psychiatrist? One of the victims was a GITMO psychiatrist Major L. Eduardo Caraveo. He falls off the table as the focus is lead to Hasan. After viewing the film The Killing Room, I could see a doctor losing it. However, Major Hasan has connections with the development of the beltway sniper. I view the incident as the two for one special. Both have become liabilities to the machine and were eliminated. The mass public lets the mass media write the script and returns to a deep sleep.
-

-
So you see you have 90% of the circumstance behind mass shooting events like the one in Aurora already well understood. You were never diverted down a false trail like gun control to get bush whacked. You see if guns were the issue, the murder rate in the United States before 1905 wouldn't rival Prince Edward Island in Canada around 0.8 to 1.2 per 100,000. You could have any sort of gun then. The rate rose after the money trust collapse and then went off the scale after 1909 when the Rockefeller Foundation went to work. Hmmm?
-
You see the MK Ultra trail leads to something rather pertinent. The CIA study and use of hypnosis experiments conducted by Alden Sears at the University of Minnesota was to receive a change of venue. Where on God's green Earth would they move it to? You probably guessed already. I expect that of you. It was transferred to the University of Colorado, Denver. Our shooter was a medical student at University of Colorado Anschutz Medical Campus in Aurora. OOPS! OUTED! That's the big secret you're not supposed to ever learn. The police searched the campus even though he wasn't attending. I would suspect it was to put on a show or retrieve evidence of the mind control work for the CIA.
-
“Could a hypnotist induce a totally separate personality?" CIA counterintelligence chief {{James Jesus Angleton,}} a leader of the British intelligence faction in the American intelligence community, established three goals for the hypnosis program: 1) to induce hypnosis very rapidly in unwitting subjects; 2) to create durable amnesia; and 3) to implant durable and operationally useful post-hypnotic suggestion. A test of rapid hypnosis took place in July 1963. The counterintelligence staff in Washington, D.C. asked the CIA station in Mexico City to find a suitable candidate for a rapid induction experiment.
-

-
I think we know who they're talking about in 1963, but the point is hypnosis is a primary part of the creation of the Manchurian. Drugs and or electroshocks were used in conjunction. Please note they required unwitting subjects like a loner Ph. D. student struggling at school. What suggestion do you think they made on John Holmes? In the Manchurian Candidate the Queen of Diamonds was the trigger. Today with Batman the Dark Knight, it's the JOKER. The card, the concept and the fictional killing machine were planted deep into James Holmes' mind. Without an expert knowledge of these techniques standard psychiatrists could never find the source.
-
There is a report there were three military men in the theatre. Two were shot, and one is missing. Someone had to open the rear door to allow Holmes to enter. I doubt it was staff. If this was a military operation, there's no stretch in the military participating. Since Holmes was wearing a gas mask, can we assume Holmes fired the weapons? He was in the dark and gas was deployed. He didn't buy gas and smoke grenades at the sporting goods store. Media will concentrate on the guns. They are police or military issue. The Buckley Air Base at Aurora hosts the 566th Intelligence Squadron.
- 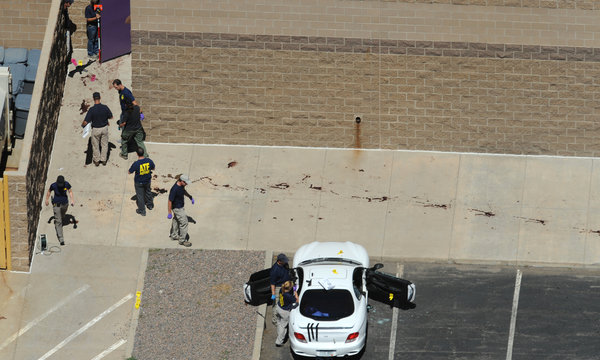 Police investigated the suspect's car outside a movie theater after a shooting in Aurora, Colo., on Friday.

According to CIA hypnosis expert Milton Klein, creating a hypnotized “patsy” is easier than making a totally controlled Manchurian Candidate. The patsy can be induced by hypnosis to do things which later show up as circumstantial evidence that will get him falsely blamed for a crime. Klein has claimed he can create a patsy in three months; a full-scale Manchurian Candidate takes six months.

I think we can see the big picture now. Guys likes Holmes are best made into patsies. He could have been waiting in his car outside while the 'Joker' shot the place up. The 'Joker' could have been a regular military killing machine or a more advanced Manchurian. Why waste an investment like that? Leave the patsy next to the scene. You know the cops will frame him up if all the evidence doesn't fit. If necessary, we'll have a commission to tell us what the script really said happened. It always happens like that. There is only one way out. You have to change the channel to see the bigger picture. If you found this web site and That Channel, you have swam upstream a good way. When you see the muzzle DUCK before you face a NOOSE as they say in Manchurian. It is a difficult language, but we are learning it well.