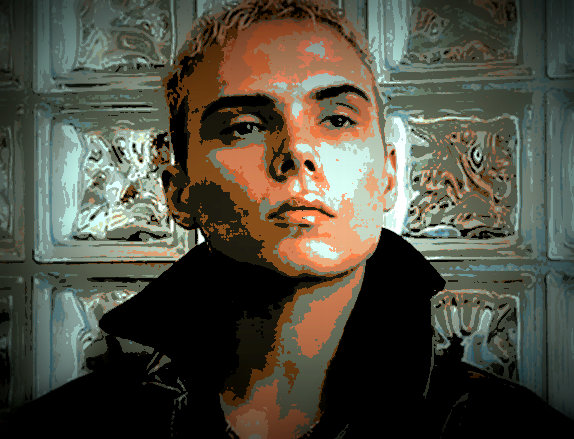 There have been a series of gruesome events unfolding in the Canadian press of late. It appears someone has sent various body parts through the post to first the Conservative Party headquarters in Ottawa at 130 Albert Street. They received a human foot. Later at a mail sorting facility another package containing a human hand was discovered. It was addressed to the Liberal Party of Canada. Both parts were well decomposed.

Another crime scene emerged in Montreal in the Snowdon area at Place Lucy where the superintendent of the building found the torso of a body concealed in a suitcase. It hasn't taken long to link the events. There are allegations of notes and a hand drawn heart being sent with the packages. A suspect, Luka Magnotta aka Eric Clinton Newman and Vladimir Radulov, was named immediately. I guess he attached a return address.

The nearly 11-minute video purports to show Mr. Magnotta attacking a naked man, who is tied to a bed frame, with both an ice pick and a kitchen knife, according to the description. The victim is stabbed, has his throat slashed and is later decapitated and dismembered.

The video was posted on Best Gore May 25, but it is unclear when, or where, it was filmed, although police have confirmed Magnotta’s Montreal apartment was a crime scene.

“1 Lunatic 1 Ice Pick is without a doubt the sickest thing you will have ever seen in your entire life,” Best Gore writes.

“It is a sad reminder that things far worse than any of us would ever imagine really take place in our neighborhoods.”

At the end of the video, a photo is shown of a person dressed in a purple hooded jacket or sweater, leaning over while holding what appears to be an ice pick. His or her face is mostly obscured – the only details that can be made out are that the individual has light skin and brown, cheekbone-length hair.

The person is standing in front of a poster of the movie Casablanca.

“Thorough investigation by the Best Gore community [led] to an assumption that the 1 Lunatic 1 Ice Pick perpetrator could be a renowned cat killer and internet attention whore Luka Magnotta,” the website reads.

Luka-magnotta.com, which describes it as the man’s official website, offers little detail about him aside from some model-style photographs, and his musings on law and media.

Luka Rocco Magnotta, left, is alleged to have killed a man and left the torso in a suitcase. Top-right: Janitor Eric Schorer looks at liquid in a fridge at Magnotta’s apartment. Bottom-right: Police investigate the scene where the body was found.

It is rather bizarre that the material is still posted on the site Best Gore. The police have not named the victim yet. It is supposed that the man was Luka's room mate. We are left with the idea that there is something rather strange being played out here. Certainly all attention is being diverted from Parliament. The Conservatives are ending the enquiry into the F-35 fighter plane cost overruns. Worse has a government serial killer been framed up  We must remember the Air Force Colonel and personal pilot to the Prime Minister, Russell Williams, was a serial killer and rapist. He flew the Royals on a junket through Canada once. The Royals were just here too. Was Luka the cannibal chef? Or is he exposing a serious crime perpetrated by the political establishment by mailing the body parts to the seats of power hoping that the identification will implicate them. We wait for the victim's identity. Did Luka learn the sordid sex secrets of depraved leaders? He wrote about how to escape from life. He is a master at that.

Some of his other writings include:

When I was a young child, I used to spend much of my time alone, either in the woods or in the local cemetery, where there was the grave of a 19 year old boy who died in the early half of last century. I felt close to that boy, and would pick flowers in the woods and take them to his grave.

In 2003, I discovered a mummified corpse of a young man in a vault, in a church where I was doing restoration work for a friend. I fell in love with him, and it broke my heart to seal him in there. I wanted to take him home and look after him.

I day dream about having him here with me. Silly ordinary things like watching TV together, listening to music, taking him out for picnics, watching a DVD late at night before taking him up to bed with me. All very ordinary things, apart from the fact that I want to do them with a desiccated or mummified corpse.

I don't have a problem attracting living men. I'm just naturally attracted to the dead.

Some people never realize until its too late that excepting their feelings and not acting anymore is true freedom.

It's not cool to the world being a necrophiliac. It's bloody lonely. But I dont really care, I have never cared what people thought of me, most people are judgemental idiots. I'm unable to talk to anybody about it and there's always the knowledge that 99% of people would be repulsed by me if they found out about my feelings. Some people would even want to harm me.

Do I feel ashamed? never, but there's nothing but love in my heart for that man in the grave and the guy in the vault. I don't see myself as some creepy pervert. I'm just somebody who has feelings, real feelings, for dead men.

As we see in the above image, we have trial my media without judge or jury or rules of evidence. The deal breaker is the photo of the crime scene. The police are usually a bit controlling of that. I would imagine it would be sealed off for some time. I would anticipate they would haul the whole thing off to a forensics lab. It may well be kept as evidence until trial in such an important case. That picture says fakery is afoot. Anyone could have posted the material on line. There were mysterious bodies found after the Pope's visit to Mexico. Now this. We should also make note of the area the torso was found in. It was Snowdon. Lord Snowdon married the Queen's sister Princess Margaret and was a noted photographer. Chief Constable Todd the police chief of Manchester was found on Mount Snowdon in Wales. But that is 100% conspiracy theory. The leader of the liberal party, Bob Rae, has been said to be the real father to Paul Bernardo the notorious serial killer and friend of Colonel Russel Williams. Was something be sent to Big Daddy?

We should have brought our own cook. The meat seemed a little tough. I'm sure it wasn't the usual child's portion. I hope they send it back or at least throw it out.