THE STORM IS UPON US 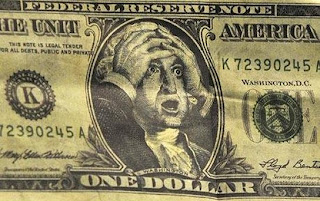 If there were economic tsunami warning centers around the world, we would have scrambled to high ground these last few days. However, the system is rotten to the core. It does not send out an SOS. It pretends and will pretend to the very last moment that the ship is unsinkable. People are reporting water from below decks on the S.S. Europa. Those on the higher decks still clutch their champagne glasses and dance in denial. It is so close to too late that it doesn't matter anymore.

When the history is written we'll have sort of understood it started with Greece. A small little brush fire that was never put out because of all the head games played at every level by those seeking a greater Europe while not even for a moment understanding a simple basic like the economy of scale.

Today the 'contagion' as they like to call it has thoroughly spread to Spain. The free trade policies of opening borders has seen to it that this plague will not stop at any frontier except perhaps those that have already lived through it and built their own immunity. The rest will face the brunt of the wave head on without any protection unless they have prepared their own Plan B.

In the face of the approaching storm, it is hard not to laugh at the twisted minds of our leaders consistently trying to use the failed concept of debt to stem the tide not understanding the contagion is debt. Einstein said, “We can't solve problems by using the same kind of thinking we used when we created them.” That is so true. Even knowing the answer to the question, we cannot find the resolve to change to leaders outside of the traditional thinking. If leaders like Ron Paul are not put in office immediately, financial Armageddon is our fate. In fact it may already be too late.

The totally INSANE aspect to this as reported in the above link is that the Spanish bank in question needs over 23.5 billion euros to keep it solvent and protect over one trillion in deposits. EXCUSE ME! How does 23 billion stop the loss of over 1,000 billion? What you're telling me in plain numbers is there is no trillion in deposits. Just as money is created out of thin air, it exists in an economic purgatory of no where. The store of value we have deposited into the banks as a store of our labours does not exist. It is an illusion.

In our reality the bank has substance as the store and accumulator of vast sums of wealth. It is not. It was and still is an illusion. In Greece there was a run on the banks. As we speak today, there is a run on the Spanish banks. Of course fear and panic causes a greater and faster escalation of the problem. The ship will sink faster. The tsunami will be higher. The run on the banks is like the running to the stern on the Titanic. The problem is the unsinkable ship is going to founder. Of course the solution is very clear. We must change ships. On the macro that will save everyone. On the micro we create our own little ships - lifeboats.

Where humorous logic comes into play is the fact our leaders refuse to reckon the fact that countries can create money. It is debt free and tax free as well. They tell us only the banks can create money for the State to borrow at interest. A nice little scheme. If the banks were the lender of last resort, then why do they have to come to States to get bailed out? It is because the State is ultimately the lender of last resort. They don't need to borrow from banks. They can exercise their sovereign right to create money in the first place. Leaders who can't or won't understand this need to be put in the brig.

The vernacular of the crisis has been legendary as well. The main one was too big to fail. My father was a small child in the depression years. That's worth an honorary degree in economics. His contribution was always the bigger they are, the harder they fall. This fall will generate the global financial tsunami. It will wash away virtually everything in its path because all our leaders opened all our borders. That's equivalent of opening the seacocks on a ship. It lets the water in to sink faster. Then we approach the next phase which is being openly discussed the bank runs in Itlay and financial anarchy throughout Europe.

There is a simple solution. Christ threw the money changers out of the temple. No wonder they teach us to hate him. The sooner we do it, the sooner we stand on our own two feet again.