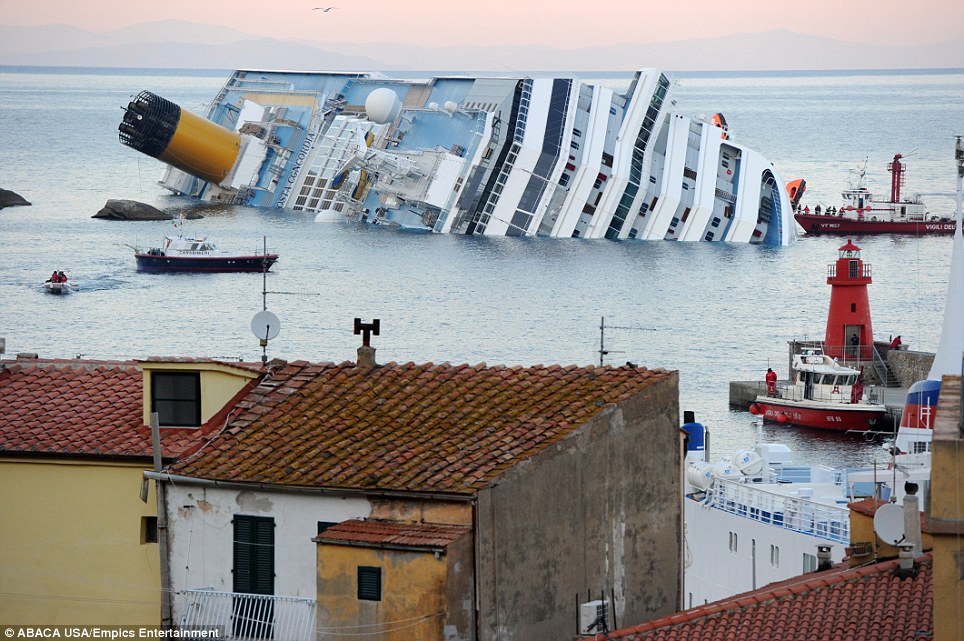 With Europe on the brink of economic Armageddon, the warm and fuzzy feeling of invincibility will soon be shattered as the entire continent slips into a financial sea brought on by a storm few if any can grasp the complexity of. Like the passengers on the Costa Concordia life is nothing but a vast party that doesn't warrant understanding of conspiracy or even history. We scramble to the lifeboats and find they are not capable of being launched because the ship was listing too far. We were too big to fail or sink because everything we make big can never fail. Ignorance is the bliss we carry into the deep, dark realm of reality.

As a warning the entire continent could steer away from the rocks of a destiny that will soon be struck. In fact the destiny was struck years and years ago. The ship was sinking just so slowly most could disregard it. When the lights go out and there is a terrible lurch, we will understand our doom and be at the mercy of others who may be at least able to pull us from the sea. However, those days are past as our leaders ripped out the bulkheads and compartments with their false doctrines of globalization. 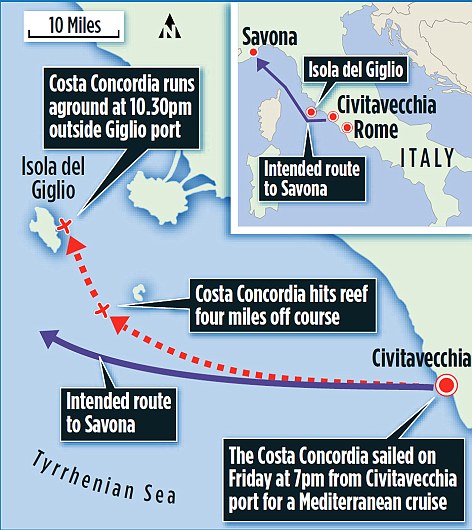 World domination must be won of course even if force must be used. In the recent wars Italy has been a NATO staging area. In fact just up the coast from the scene of the sinking of the Coasta Concordia is Camp Darby. It is one of the six global bases in the world that is capable of guaranteeing an immediate simultaneous mobilization of troops, weapons, munitions and equipment. Camp Darby has one of the largest stockpiles of weapons of United States forces in Europe totaling 21,000 short tons of explosives. This base is the staging area for war in the region. With the budding hint of conflict with Iran on the horizon, this has not changed any.

In the past, there was another incident involving an Italian ferry called the Moby Prince. This vessel was lost on the evening of April 10, 1991 near Livorno. The ship collided with a tanker Agip Abruzzo. A fuel tank was ruptured and the Moby Prince was set ablaze. It sailed off at speed and on fire. Its SOS was not heard. The rescue saved all on the Agip Abruzzo, but everyone except a cabin boy died on the Moby Prince. One of the concerns were there were five U.S. Navy ships in the area. They may have been secretly loading explosives. In fact there is controversy that depleted uranium has been moved through Camp Darby. Its underground storage facilities collapsed in the summer of 2000 necessitating covert removal of 23 tons of explosives.

I saw the silhouette of the Agip Abruzzo just outside the harbor, but not the Moby in flames. [...] I had a tanker to my left, about 700–800 meters from the Naval Academy. Then there was the tanker in that position. On the other side there were four ships, among them one perhaps carrying munitions; at the northern entrance, near the Calambrone, there was an illuminated American ship loading munitions.

It is still unclear what was the role of the Theresa, a ship that was found in 2008 to have been present at the scene.[34] A mysterious audio recording from 22:45, just after the collision, was discovered in 1991. It said in English: "This is Theresa, this is Theresa for the Ship One in Livorno anchorage I'm moving out, I'm moving out ..."[6][34] No ship named Theresa was registered in the harbor records, and it is still unknown what is the "Ship One" referred in the recording.[34]

It is still unclear, because Italian and U.S. military authorities firmly refuse to comment on it, whether US or other naval vessels were present in the vicinity of the disaster, and if so, what they were doing there. At the time of the collision, radio recordings and verbal accounts imply that unregistered ships were probably present, and transfers from cargo ships bearing munitions were alleged. The presence of U.S. Navy ships – or military ships from other nations – was repeatedly reported, but their real presence, identity and activities are currently unknown.[6][41] American ships frequently visited the harbor, as Camp Darby is nearby. The presence of undercover military ships was not unusual; neither was the use of fake names when ships were employed in secret military activities.[41] Arms traffic in the Livorno harbor was allegedly linked to the disaster, as an explanation of the covert ship movements and of bureaucratic hurdles encountered when seeking official documents from the military commands.[42][43][44]

On November 16, 2007 Fabio Piselli, a former army paratrooper, told the press of new information about the disaster that he had found while investigating the death of a relative working for the U.S. Embassy in Rome. He met with attorney Carlo Palermo, but was later allegedly attacked by four people who kidnapped him, shut him in the trunk of a car and set it on fire; however, he managed to escape.[53] An inquiry into the incident was opened. 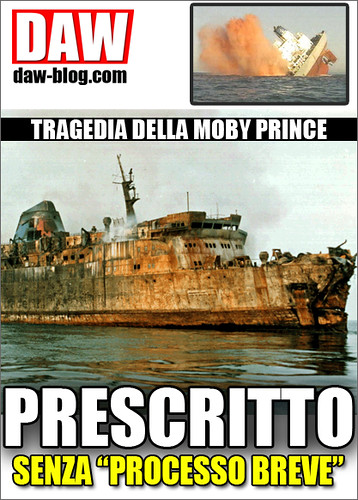 So now we return to the modern era of 2012. A cruise ship was plying its regular track along the western Italian coast. We have forgotten the past. We abhor the 'C' word. We are in a state of ignorant bliss. New war drums are sounding in the Middle East. We are far away from it all sailing in a blissful state approaching Camp Darby. The cruise director has scheduled no tours there. It is not on the itinerary. Then like now, we are not aware of the positions of U.S. warships like the command vessel USS Mount Whitney. We passed its home port Gaeta a short while ago.

The Mediterranean is a massive war front. Naval vessels move in secret and silence. However, while NATO is on a war footing, they're preparing for the ultimate. Times have changed quite a bit. There are new weapons being tested and deployed. One of them is EMP electromagnetic pulse. This weapon will fry electronics and disable modern industrial equipment like the engines and power systems of a cruise ship. There are reports of two power failures on the Costa Concordia with all six engines being knocked out. Backup systems were in a state of flux. That's quite a screw up. I can only put an EMP wave at the top of the list.

Recounting scenes reminiscent of the film Titanic, survivors spoke of crawling in darkness along upended hallways and stairwells as crockery and glasses smashed around them.

He then discovered that the ship was four miles off course, but was unsure why. One theory is that an electrical fault had wiped out the ship’s navigational power and steering control. Captain Schettino told investigators that charts showed he was in waters deep enough to navigate.

Experts have said the captain may have been correct in his belief that his ship met its fate because of a power failure.

Passengers rescued from the stricken liner reported there had been a power blackout and a large booming noise, which indicated the vessel may have suffered an engine room explosion.

Last night Malcolm Latarche, editor of the global shipping magazine IHS Fairplay Solutions, said the problem may have been caused by a phenomenon known as 'harmonic interference'.

Mr Latarche said it was possible the cruise liner experienced the same problem that saw the Queen Mary 2 lose power in September 2010 as she was approaching Barcelona. On that occasion, the QM2 was able to carry on into open sea.

The expert said the harmonic interference – a type of power surge – could have caused a malfunction in the generators feeding the ship's six diesel electric engines with which the back-up systems could not cope.

This would have caused the ship to lose navigational power and steering control and veer off course, he said.

Asked for his assessment of the incident, Mr Latarche said: 'I would say power failure caused by harmonic interference and then it can't propel straight or navigate and it hit rocks.'

He added that once a ship experienced problems with the electrical supply to its main propulsion motors, it could lead to a problem with steering.

'My boyfriend is Italian and is one of the ship's engineering officers on board.

'He said that there had been a power black out not once but twice. 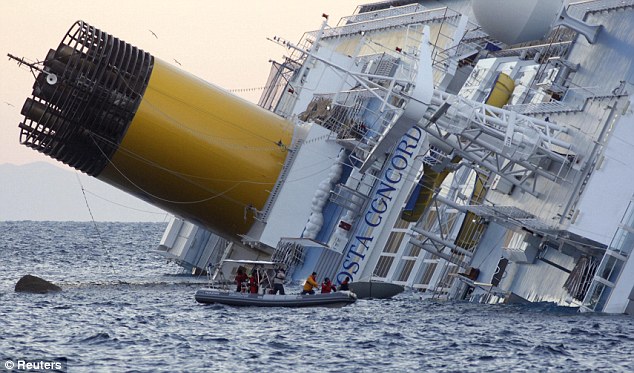 The future was here yesterday. We move at a speed much slower than the predator.

Satellite Sea State Data could either be taken from the NOAA database, or for better accuracy, certain DoD satellites could be tasked to directly observe the ship’s unique signature in real-time, while interactively ‘tweaking’ for optimum stealth. There could also be a locally launched UAV to do this same interactive alignment.