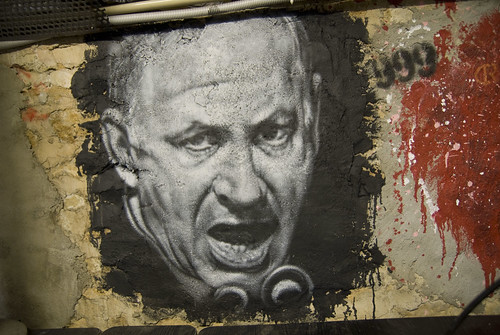 There are a litany of individuals and groups that always try to exert more influence upon the world than they deserve. In fact they don't deserve any because they are just pursuing selfish ends. What happens to the masses of people they term useless eaters means nothing. They are exploited and killed like livestock. We are fast approaching a point in time where we will cross a threshold upon which there will be no return. The most significant point will be the selection of the next President of the United States the holder of the nuclear trigger. You see it is NOT Iran that is the greatest threat to the world. If they built one nuclear weapon and even used it, most of the world would survive and carry on. Iran would be a glazed glass surface for a half life or two, and that would be that.

If in this election the terrorists choice, Mitt Romney, gets elected to pull the trigger; he will. This candidate is totally and completely under the control of Israeli Prime Minister Benjamin Netanyahu. We are NOT voting for Mitt Romney. We ARE voting for Benjamin Netanyahu. He will be the defacto President of the United States. He will have control of America's nuclear arsenal through his puppet Mitt. There is ONE strong voice opting for a war with Iran over all others and that is Netanyahu. He is totally committed to this move. If he were a movie character he would have the role of Brigadier General Jack D. Ripper in Dr. Strangelove. Mitt of course would be best man for the role of Major T. J. Kong played by Slim Pickens renowned for piloting the H bomb to the target while waving his cowboy hat in the air screaming YEE HAH!

This is the most dangerous scenario America could ever face. It could lead her into direct conflict with Russia. This is NOT about jobs and the economy. This is about war. I have analyzed what the true feelings are in the Russian leadership for years. The linked interview with Vladimir Putin CONFIRMS what I have said. Russia will not be pushed around. Like the cornered animal, it will strike back. The movement towards its borders by the destruction of Syria and Iran will have dire consequences in the super power arena. It is NOT Iran we should be worrying about. They are the mouse that roared. If the infamous red line crosses Russia's sphere of influence, an Armageddon of unparalleled description could be unleashed. Putin even mocks us by saying Al Qaeda is an American regime change tool. He suggests letting the Guantanamo prisoners go free to fight in Libya. He misses the point that Guantanamo is where they make the Manchurians for the really special missions not low intensity conflicts. That would be CONSPIRACY.

Mr. Netanyahu was and still is a warrior. He was a special forces commando like his brother who was killed in the raid at Entebbe. That was a text book counter terror operation. The soldiers involved were masters of their craft. The sad part is good men die in the fight against evil. By expanding the pattern of conflict Mr. Netanyahu may be actually seeking a personal vendetta against what he believes is responsible for killing his brother. No matter how many die in that pursuit his brother will never be brought back to life. In fact Mr. Netanyahu becomes the reaper of more losses by the expansion of conflict. The greater path is to make peace with an enemy and call him your friend. For when we are all misled to the dark side of violence there I believe we are all wrong.

As good as this propaganda shot is, they are on the same team Obama was a CIA man under cover back then. They were both warriors. One just carried a rifle.

To achieve this end we must be concerned that the long association of Mr. Romney and Mr. Netanyahu are detrimental to the United States, the world and even Israel. Getting the war started will not benefit any of us. The means of getting Mr. Romney into the White House have all the hallmarks of TREACHERY! The leader of the opposition in the Knesset, Shaul Mofaz, even made the allegation. He said, "Which regime is more important to overthrow — the one in Washington, or in Tehran?" in questioning Mr. Netanyahu.

Netanyahu blasted U.S. policy on Iran to Bulgarian Prime Minister Metodiev Borisov. Netanyahu said that those who do not place “red lines” in front of Iran have no moral right to put a “red light” in front of Israel when it comes to military action. It is said that Netanyahu leaked details about a refusal by the White House to even meet him. It was intended to influence the election and possibly sway Israel supporting democrats away from Obama. It may have worked on its own, but with the execution of Ambassador Stevens in Libya America was in no mood for Romney's negative comments about the Obama administration being weak on protecting Americans abroad. Romney lost several points in the polls. His further comments on the 47% of Americans who don't pay tax offended the ultra rich and the ultra poor. His $412 contribution to income tax on a reported $20 something million not withstanding. The CONSPIRACY question of the year is was the creation of the Innocence of Muslims an intelligence operation to make Obama look bad? If we light dozens of bush fires can we make Obama look weak and incompetent like they did to President Carter in the Iranian hostage crisis? The answer is, of course, YES! The next question would naturally be was the film cover for the hit team that attacked Ambassador Stevens? The most likely reason there is YES as well. You see Ambassador Stevens was part of the Libya destabilization team. He travelled in country will Hillary Clinton. They met Libyan rebel Chief Mahmoud Jebril March 14, 2011. Stevens spoke Arabic. He was the translator. They called in the air strikes. He was contact man with al-Qaeda groups. He was a liability that had to be eliminated. He knew the truth. I saw it in his eyes from the previous picture. They told everything. We're getting a very clear picture here. Romney is a puppet of Israel's foreign WAR policy. If he gets into office, it will start. Where it stops has been called Megiddo. It is a mountain in Israel. It is Armageddon in the Bible. The mountain is split. Israel is destroyed. Would a war with Iran be good for Israel? It's a BRAVE NEW WORLD. Just say NO! There are more candidates that Obama and Romney. VOTE FOR THEM! Get rid of mainstream corruption. You have the power to break the spell they hold over you.